I need a nice hot cup of Tea, whats your favourite? 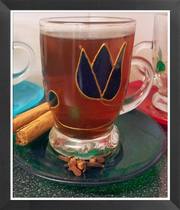 Traditionally served in the Middle East, Tea made with Cinnamon and Cloves and sweetened with sugar but no milk. Served in a glass. Delicious! I use Earl Grey Tea for added flavour.

I'd like to try that.
My usual is English breakfast tea, or I bung a PG tea bag in a mug

I like Yorkshire Tea. I prefer it to any other tea on the market. I do like Earl Grey or Lady Grey for a change though.

Tick Tock redbush tea, without milk (can't take milk in any sort of tea) or sugar, in a china mug.

Peppermint, or something with camomile - I don't like normal tea!

Lady Grey & some fruit teas for me, but never in a mug!

I am a Yorkshire Tea girl too. Strong with milk but no sugar. Preferably served in a cup and poured from a teapot. I quite like peppermint tea too.

Twinings strong English breakfast, milk no sugar in a china mug it doesn't taste the same in a thick chunky mug.

Usually Redbush or decaf these days!

Twinings assam . Peppermint tea or Darjeeling when I need cheering up. Always in china cups or mugs as I think pottery makes a clunk sound on my teeth.

Tea, just ordinary English breakfast tea as I don't like flavoured teas of any kind. Even Earl Grey turns my stomach. Tetley or Yorkshire is normal for us.

In a thin mug dash of milk no sugar.

M & S Luxury Gold loose leaf tea. We used to have Sainsbury's English Breakfast then I think they changed it, the flavour wasn't so good.

I like Sainsburys Red Label tea bags in a mug - milk and 1/2 a spoon of sugar. I have a special mug for first cuppa in the morning - it's BIG!

Rington's Deluxe or Northumbrian Blend.
Milk and about 1/8 teaspoon sugar. Just can't give it up completely

I also have a huge mug for my first cuppa of the day. Nothing fancy just PG Tips or Ty-Phoo.

Ooh, I'm so glad someone else has sugar in their tea Janea ! I don't have it in coffee but I can't give it up in Yorkshire Tea for Hard water.

Strong tea out of a teapot with 2 bags, in a china cup with a drop of milk and a level teaspoon of sugar.

Nothing else quite hits the spot.

Usually Yorkshire tea but we were given some Dorset tea and liked that very much.
We managed to find some in Waitrose last week, the packet looks a bit different to the one in the hamper but I hope it's the same flavour.

Even if it's a mug it has to be bone china.
Milk, no sugar thank you.

which seems to make us talk more and more about food

Any breakfast tea up until about 11am served in a good china mug or cup.
Forgot about "no snack Feb" and just devoured a yummy M&S fruit scone whilst my evening meal is cooking.

it was worth it though.

I've just re-started drinking tea occasionally in the last couple of years but preferably only if it's Yorkshire, made in a pot and served in a china cup or small mug. I stopped drinking tea when I had to change to decaf many years ago. Decaf tea was awful at the time, Redbush was ok for a while, so I stuck to decaf coffee. That has recently become boring to me so have the occasional tea now.

No sugar though in either of them - I gave that up when I was eight. I went to a Church of England school (only school in the village) and we had to experience suffering during Lent ... hmm

How many do you have?

How to let go of my adult children