Got a leaflet through the door,from Parsley box offering 10 meals + 2 bottles of wine for £19.99 delivered,this is an introductory offer but does seem a bargain,
Has any one used them or are there better companies out there. Our neighbours have used Wiltshire farm foods.
Any advice on this would be appreciated. 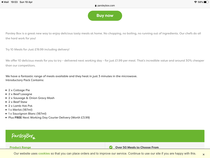 It sounds as though they are all dried? and you don't have to refrigerate them.

I have used oakhouse foods for over a year and have found them excellent. Two sizes of meals 400grm+240grm for small appetites. An excellent choice of meals with full dietary info and a gluten free range. Meals purchased individually or in 7 day or 14day pks of mains only or mains and desserts. They also supply groceries and household essentials. I am 85yrs old and live alone they are perfect for me. No minimum order and free delivery over £30 and only £1 under that figure. I tried Wiltshire farms but was not impressed with them. I would recommend oakhouse. The brochure can be ordered on line.

My FiL had Wiltshire Farm Foods. They were very good but had to be kept in the freezer. His dementia meant that he put them anywhere when they were delivered so I had to have them delivered to us and take them to him. They were good meals and we ate some that were spare.

Then I found Parsley Box. Friends have tried them and recommended them to others, so word has spread around here. I prefer them because they can be kept in the cupboard (but they are NOT dried, it's a different technique) and I think they're tastier. We use them in the motorcaravan and on occasions when we're late in and don't feel like cooking. Or we did.....

My 88 year old neighbour has them, he thinks they are ok, but need extra veg and potatoes I think, or he wouldn’t find them enough.

Yes: we have them. We thought they were a good idea for taking on holiday (if ever we get to have another one). The bottles of wine are only small ones but the wine is very nice. You do probably need to add more vegetables: size is ok for me but probably a bit small for a man sized appetite. They also supply instant mash: something I do wish I’d stocked up on pre lockdown. Even though they say it’s taking longer than usual to get due to demand, ours arrived very quickly. The meals in the offer are usually @ £3, but they do larger ones for @ £4. They’re certainly good as back up meals imo. By the way, apart from the instant mash they’re not dried.

I tried Parsley Box for my friend and you don't have to refrigerate them. They're only snack size really (apart from the few large ones) - and they all have a peculiar 'long life' taste to them. She sampled a few, then gave them away. They're nearly all meat-based too.

I like the frozen Cook meals but have to get somebody to collect them as they've stopped delivery here. They taste home made.

i know a neighbour who uses parsley box and is very happy with them.

The wine in offer is 2 glass size bottles. They are ok for standby.

If I had to resort to ready-meals they would have to be M&S.

The lasagne Parsley Box is vile; I might try heating one in the oven rather than microwaving it to see if it improves it. The beef casserole and similar ones are ok; some do have a strange aftertaste but some don't and they are quite nice. I have bought some of their curries and the one I tried was lovely; I've yet to try the others [planning to do that next week]. The sausage and mash is sausage in a gravy/mash mush but the sausage itself is nice. Having forgotten about instant mash [didn't realise you could still get it] I bought more parsley box ones but then bought some [light bulb moment] Smash so I'm going to stock up on that. And tins of vegetables because the meals aren't big enough without adding extra to them.

Iceland frozen mash is lovely when you don’t feel like peeling, boiling etc or are short of time.

I think it was Parsley Box that my friend's Aunt bought. At least, they were cooked meals that didn't need to be refrigerated.

She threw them away as she didn't like them. At that sort of price I wonder about the quality of the ingredients and the nutritional value.

My Mum gets Meals on Wheels because her sight is very poor and she can't heat up frozen meals. They don't seem great but it's difficult to know what else to do.

My mother used to get Wiltshire Farm Foods meals - there was a vast selection and they seemed perfectly OK, if not terribly exciting, though she wouldn’t have chosen exciting ones anyway.
When I went for my regular ‘sleepovers’ I would often take M&S ready meals.

Eloethan can your mum use a microwave? Most frozen meals e.g. from 'Cook' can be microwaved.

I knew someone whose elderly mother used meals from a firm who also supplied their own make of microwave (or a specially-made one) which only had the settings that their meals needed, so there no confusing choices of power and time - put it in, press the start button, get out plate and cutlery, take meal out of microwave and eat it. It suited her perfectly.

Oak house is good my mil used to get them always good value.

Riverwalk Although she has a microwave, she rarely uses it. Even when she could see reasonably well, she was very impatient and didn't give frozen meals enough time to cook properly. I don't think she could use a microwave for this purpose now.

I have suggested buying in something like Wiltshire Farm Foods or I think there's one called Oak Farm Foods, both of which seem to get quite good reviews but it would mean someone coming in at lunchtime and cooking it properly for her. She is adamant she doesn't want that. I do have Power of Attorney and have made the decision to bring in carers in the morning and late afternoon to ensure her eye drops are administered properly. Although she has ample funds to pay for extra care, she is very reluctant to do so and I feel uncomfortable overriding her wishes yet again re Meals on Wheels, which she says are OK, though she doesn't seem to eat that much of them.

We tried all sorts of different ones for mum including Cook, M&S Waitrose and a hot food delivery, but she was so fussy we ended up cooking for her. It did make life more difficult though.

My aunt is 83 and her neighbour was doing her shopping for her during lockdown, but she said she couldn't decide what to get without 'seeing' the food in the shops. I suggested writing out a weekly menu, so she'd know what she needed, but she couldn't be bothered. I suspect the very patient neighbour had had enough of being asked to go back to the shops for the odd thing, as my aunt is now ordering and enjoying Wiltshire Foods.

I needed preprepared meals for a bit and there is nothing appealing about any of the food. Potatoes grey in colour, Mac and cheese burned and grey brown smelled horrible. Soup tasteless and mush like green slop. Really tasteless and smelled awful. Just because we are older does not mean that our food should be disgusting and substandard. Don’t waste your money with parsley box.

I tried Parsley Box ready meals. They tasted ok but everything looked the same shade of brown! So not visually appealing. However I tried the fresh fish box and this was all delicious and included cooking instructions.

Also meant to say I have had several deliveries from COOK and the meals are delicious. Highly recommended.

I can’t remember the make but my husband bought some. Ghastly. Smelled and tasted like 1950s school meals.

Books you've enjoyed reading with your grandchildren and would recommend

Breakdown in relationship with daughter

Anyone regretted getting rid of their bath