Dishes for everyday... of the edible kind.

In response to the many Gransnetters( ok, the three of you), who, on opening the everyday dishes thread, excitedly expected to find yummy, easy-fix recipes.
Any people reading this who have that marvellous gift of putting together food stuffs in a non-faff manner and coming up with a tasty , nontoxic too, meal? I'm sorry, I'll say that again, tasty, not too taxing meal ? Of course the auto correct non toxic would be great too !

Almost all my recipes are faff-free. Here’s tonight’s supper:

(These quantities are enough for one very generous portion or two smaller ones)
Half a tub Philadelphia Cheese
Half a small tub of crème fraîche
Small tin of salmon (pink or red, depending on what is in the cupboard.)
Fresh or semi-dried coriander leaves
Farfalle or conchiglie pasta - 75g to 100g per person

Put pasta on to boil.
Meanwhile, melt the Philly and crème fraîche together over gentle heat and then put in the salmon, mashing it with a fork or the back of a spoon. Season to taste. Keep on the heat until the pasta is cooked and drained.

Tip the drained pasta into the salmony sauce, stir, and sprinkle in coriander leaves. Serve with a little coriander sprinkled over the top.

From start to finish, it takes me around 12 minutes to make. Measurements are not exact, and you can just multiply quantities to feed more people.

I have a friend who lived in France for many years and she says the French make a lot of sauces using all the different flavours of Philly cheese. My friend likes to use a tub of Philly, sweet chilli flavour and a small tub of Greek yogurt in place of milk or cream in a crustless veg quiche: it's lovely.
I'll be trying your recipe geekesse, everything I like in there.

Both those recipes sound good and faff free to me.

I’m another who was disappointed when I opened the other thread. This one looks interesting so far. Thanks Ninarosa (I like your humour too!)

I m a stir fry gal so everything goes in one pan with a bit of olive oil for ten minutes variety of spices or flavours go in to vary it have with noodles rice or chips or just by itself with a chunk of bread or chappatti
Today was chopped up courgettes, onions (out my garden) mushrooms, pepper (hot or sweet whichever you prefer) tomatoes with a satay sauce, ten minutes over a low light
At same time rice cooked in a rice cooker with grated coconut same ten minutes And bingo ....lovely meal in ten minutes

A favourite of mine too, geekesse. If I haven’t got Philly or Creme fraiche I just add lots of butter.

Friday was tray bake: chop courgette, aubergine, onion onto baking tray, add small new potatoes and mushrooms. Two capfuls oil sprinkled over, plus garlic powder, balsamic vinegar and chopped fresh sage, shove in oven. After about 30 mins, shake about, more liquid if required, this week topped with chicken sausages, then back in oven. Can substitute veg and meat/fish or halloumi, or just veg. Easy, one piece of washing up.

BlueBelle, is the satay sauce a ready made bought one or can peanut butter and something ie.creme fraiche mixed together achieve similar result ? Never really done stir fry but love noodles in sauces.

When we’re away in our Campervan, we often have easy pasta meals. One is cooked pasta, mixed with cooked leeks (I steam them, sliced) and cooked chestnut mushrooms, with soft cheese, like Philly, stirred in. The original recipe was on a Waitrose leaflet and used Mascarpone cheese - we did that once or twice, but soft cheese is cheaper.

NinaRosa I use a shop mix because I ve no great interest in cooking but yes you could easily make your own
I m the stir fry queen cos everything just goes in the wok for ten minutes, different flavours, different spices, different veg bingo jingo
Nice and easy fill my tum one pot to wash what could be better 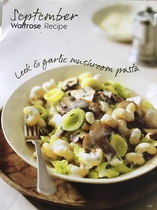 I mostly don't use recipes. I just prepare each item as simply as possible and dish each up separately.
eg today we had salmon fillet baked in foil. With various veg cooked separately, some with dressing, or plain green salad.. We had the same yesterday except baked chicken portions instead of salmon.
Today I tried a new idea of rice salad with mushrooms which was good.
Still got some salmon left for tomorrow - maybe with oven chips and salad.

I like the sound of your faff free salmon and pasta recipe geekesse, everything in there that I like and with a green salad, that would make a nice lunch for friends.

Does anyone use their slow cooker for something a little different to the usual stews, gammon joints etc ?
I think Ive read that some sort of frittata can be baked in one.
I haven't got an oven for two weeks so I'm looking to diversify!

I've done soups and a rice pudding in the slow cooker but never anything more adventurous.

I've cooked a rice pudd using Basmati rice and coconut milk and its was heavenly Chewbacca: no crinkly brown skin though.

Hmmm! Basmati rice and coconut milk? I've got copious quantities of both in the cupboard Ninarosa so that's a good idea. Cheers!

I do like rather an overkill of nutmeg in mine, peppered with fat juicy sultanas too. 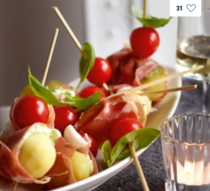 A German storecupboard meal - a favourite of my (German) DH is Eggs in Mustard Sauce. Hard-boiled eggs, peeled, halved and still warm, on a bed of rice, with a simple white sauce, flavoured strongly with mustard. I prefer to flavour the sauce with curry, however, and he's quite happy with that, too.

As for the "adding stuff to Philly" trick, I recently tried out a recipe which mixed pesto with cream cheese. The actual recipe was a bit of a faff, but the DGC enjoyed it:

- tiny, boiled and peeled potatoes, cooled right down. These are then wrapped in strips of Black Forest or Serrano ham, which has been spread with the cream cheese and pesto mixture.
- cherry tomatoes
- basil leaves

As I say, the kebab lark was an awful faff. The potatoes hadn't cooled right down, so I just rolled up the ham and cheese spread and stuck them on the skewers separately, or the cream cheese would have melted and run out. But the taste of the pesto mixed with the cream cheese was fantastic.

Pesto on its own is too intense for my taste. We have loads of basil in the garden and I have already frozen 20 small packs of pesto this year.

My granddaughter loves this so much she makes it herself at home for her dad.
Peppers (red,orange,yellow are best) filled with lumps of feta cheese.sprinkle oregano, thyme, mint and a really good slosh of garlic infused olive oil(obviously you can use fresh garlic) roasted in the oven
The beauty of it it can be an accompaniment to oven baked fish or meat all in the oven at the same time.

All in one tray bakes like morethan2's are brilliant. I do a similar one with chopped up sweet potatoes, cherry tomatoes red onions and garlic. Do a large trayful and it makes enough for several meals, or can be frozen.

Red peppers halved, filled with chopped tomatoes, garlic (optional) and a couple of fillets of anchovy, drizzled with olive oil and baked in the oven for 50 minutes. Serve with crusty bread, makes a good starter, or with a salad for a main.

Or for real simplicity, we found this company in a Londis whilst on holiday. www.cookfood.net/. Wonderful meals for about £8.50 for a two person main, puddings for two around £4, a treat for when you you need a rest from cooking altogether. In fact I know a member of the clergy who hates cooking and almost lives off these (but his salary is considerably more than my pension!)

Similar idea to JackieB we sometimes have eggs in cheese sauce. Quick to prep and can easily be done ahead of time. Hard boil eggs, halve and lay cut side down in shallow oven dish. Pour cheese sauce over the top and brown under the grill. Serve with mashed potatoes and salad.

Not too old for a denim jacket!