I watched Nigella last night with her twice buttered toast and an enormous chicken sandwich which had I dont know how many different ingredients - anyone tried either of these yet?

No, I'm not keen on her recipes but apparently fish fingers were in short supply after her fish finger curry last week.

That chicken sandwich for lunch took sooo long to prepare and make I wouldn't have it ready until supper time!

No, I find her irritating and too many carbohydrates in her food.

I would never be able to eat a sandwich that huge. I think it would be nice without the bread though.

She's no worse tha most TV chefs/cooks.Jamie Oliver does things he calls simple.my young friend found one of his recipes needed over 25 ingredients..apparently all things we should have in our storecupboards.She called me to see if I had some of them as I cook a lot but I didn't hav ehalf of them and hadn't even heard of some of them.Then theres Blumenthal....I could write a book about his nonsense...a chicken that takes 3 DAYS to cook ,he says its the best chicken you'll ever taste ..I'll take his word for it .
Portions you can change to suit yourself so Nigella's massive sandwich may not be for you but there will be millions who would love it .
I take it Nigella is just the latest woman on the GN list of women who dont meet your standards? The Meghan Markel or Katie Price of the cookery world .Dont like her? Dont watch her ...simple.

paddyanne, 'no worse tha most TV chefs/cooks' (sic) - really?
Her 'flirty' behaviour is bordering on the pornographic at times!

For probably the first time I was really irritated by her last night.
All that flirting and posing.

I thought the sandwich looked awful and how she got her mouth round it I really don’t know, I thought she turned away from the camera because she really looked uncomfortable getting it all in.

However, she mostly annoyed me because how can anyone be sixty and look that good😡

I used to make Cherries Jubilee back in the 80s. We had it ladled, warm, over ice cream. It is delicious and it has spurred me on to make it again. The bread looked nice but I thought the chicken sandwich looked disgusting. I hate gherkins which doesn't help.

I take it Nigella is just the latest woman on the GN list of women who dont meet your standards? The Meghan Markel or Katie Price of the cookery world .Dont like her? Dont watch her ...simple.

I like her, paddyanne but you have to admit this series is a little on the bonkers side.

That's an unfair comment Paddyann. No one, that I can see, has said that Nigella doesn't meet standards. Personally, I don't like her recipes. Jamie Oliver, Heston Blumenthal, Delia Smith, Mary Berry, Hugh Fearnley- Whittingstall and Lorraine Pascal all manage to cook well and present their recipes without gurning, flirting and simpering to the cameras.

I saw her live show three years ago. Believe me there is no fancy lighting in Ely Cathedral.

She looked lovely. Her hair was a lighter shade than it appears on the TV and her make up had a natural look.

I don't think the stripey top she wore last night did her any favours though. 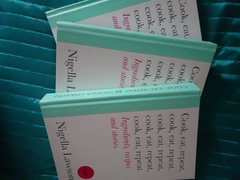 I take it Nigella is just the latest woman on the GN list of women who dont meet your standards?

You're wrong if that comment was coming my way.

i'm starting to go off many tv cooking programmes. plus magazines and books. including Nigella.
There seems to be a trend to use a long list of ingredients, mostly spices and herbs. sometimes bottled sauces. Which means we need to have a huge stock of fancy bits and pieces.
Apart from not always being able to find them in the shops, my view is if you have good fresh basic proteins and veg. you shouldn't need all those extras.

No!! Step back from the frozen cherries. They're mine. All mine. Such a bargain treat and so delicious. You can eat banana skins instead...

That's an unfair comment Paddyann. No one, that I can see, has said that Nigella doesn't meet standards. Personally, I don't like her recipes. Jamie Oliver, Heston Blumenthal, Delia Smith, Mary Berry, Hugh Fearnley- Whittingstall and Lorraine Pascal all manage to cook well and present their recipes without gurning, flirting and simpering to the cameras.

Try her cappuccino pavlova. It's easy to make and delicious and can be made all year round (no fresh fruit needed) There's also one with chocolate and strawberries and another with lemon curd.

Re last night's programme I don't know why she doesn't buy salted butter. I do like her programmes because of the views of London and also the music but I do think that she's becoming a caricature.

No!! Step back from the frozen cherries. They're mine. All mine. Such a bargain treat and so delicious. You can eat banana skins instead...

I and a group of friends tried roasting banana skins back in the 60's. Sadly the end result didn't work.

When we watched the curried banana skins episode I remarked that I'd only be that desperate if there was a war on and did they feature in the wartime cook books?

Queue snorts of laughter from DH.

Opps, Cue not queue. Brain definitely not switched on this morning.

Clever self- promotion, don't you think?

How to get really good audience figures? Remember Charlie Dimmock in her younger, braless days? Men and boys, eyes glued to the TV set - nothing to do with gardening or cooking though.

I don't watch all cookery programmes, I like Nigella a bit of up beat escapism and quite staged, but I'm fine with her off the wall style, I first saw her eons ago, was only aware of her as Nigel Lawson's daughter, introduced by Nigel Slater on one of his cookery programmes, who I also really like. Cut my teeth on down to earth Delia, those programmes she did way back were an inspiration at the time. I've also watched Jamie Oliver and enjoyed his style but would agree some of his recipes are not as simple as they are purported to be.

Am I alone in thinking Heston Blumenthal's programme was the most boring cookery programme ever presented, not interested in that science laboratory style of his personally

I have a friend who sampled his tasting menu at The Fat Duck in Bray, snail porridge and more of a similar slightly unusual fare, all costing an arm and a leg, anyway she's still alive!

I like Nigella, but her current series is a bit OTT. I use some of her earlier recipes quite often - Chocolate Lime Pie is both simple and scrummy, and she has a delectable recipe for using out-of-season strawberries in a hot pudding.

Given that her private life has been difficult she looks great and good on her.

Hetty I do see where you are coming from with Nigella, but to be fair some of the French chefs come out with very risqué vocabulary and seductive suggestions, (even Raymond has a glint in his sexy eyes). I'd rather that than Gordon Ramsay's f-ing and blinding.

Can only one spouse reconcile with EAC?

Do you tip the postman,binman or any helper at Christmas?