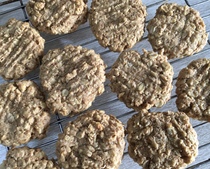 I can usually produce reasonable cakes, but I’m less successful with biscuits, for some reason. Anyone got any simple recipes or tips? I made some oaty biscuits earlier (flour, porridge oats, sugar / melted butter, honey, bit of milk) and they look ok, but are rather bendy and seem uncooked underneath ( baked for 15 mins) - second pic.

They look perfect to me. I like things underdone rather than crispy.

Aw, thanks, Luckylegs. Perhaps I should have baked them for longer?

Longer cooking would drive off more moisture content from the butter and milk. Still, some cookies are meant to be soft.

I use fine oatmeal, oil and no milk - so they come out crunchier.

Biscuit is an old French word that comes from Latin, bis meaning twice and coquere cooked.
Biscuits are often best if twice cooked or allowed to cool in the oven.

Possibly the milk has contributed to their underdone look? I never add milk to biscuits because I want them to be crispy. They do look nice to me and have prompted me to eat the last flapjack.

^ They do look nice to me and have prompted me to eat the last flapjack^. They taste rather like soft flapjacks, whereas I wanted them to be more crunchy. I put them in the freezer and they taste better now!

Maybe no milk next time, too

Think of the fun you'll have experimenting Sarah!

Think of the fun you'll have experimenting Sarah!

We love these very simple biscuits my GD now bakes them on her own. You can flavour them with chocolate or lemon zest if you like.

Ooh, thanks, tanith, I remember making those with Playgroup children years ago!

Hetty's recipe with oil instead of butter and milk produces a crisper biscuit.
In my recipe the wet ingredients are oil and egg, beaten to an emulsion.
They do sometimes need a second baking.

Maybe use a bit of egg instead of milk?

I make bendy ginger biscuits which harden as they age. And then become great for dunking in one's tea.

A friend has just phoned and we chatted about biscuits

- she suggested putting the dough in the fridge for a while before cooking. I’m going to be making a lot of biscuits this week I think

Sounds like a recipe of mine for oaty biscuits, OP, except that I think mine has golden syrup rather than honey. And I perk them up with a bit of lemon zest.

They do feel a soft when they come out of the oven, but harden up as they cool. Mine aren’t supposed to be entirely crispy though, more on the chewy side.
I could really fancy some of those now 🐷, might make some later - they’re really quick and easy.

I've been baking biscuits and have found that you can't bake more than one tray at a time.

I'm trying to perfect the kind you roll and cut out. I've tested the oven temperature with a thermometer, have tried varying the temperature and cooking time, but haven't quite got it yet.

I have also got one of those rolling pins with rings around the end to control the thickness you roll out to. 3mm as given in recipes is definitely too thin. 5 mm is about right.

I'll keep at it. Then I shall go on to the kind that Sarah48 describes in the OP.

In the meantime I have another question about biscuits for which I will start another thread.

How is your area getting through the vaccine program after those in age order?

Issues with Sons attitude and where do i go from here?