Our daughter hopes to fly with her 2 children. Our problem are car seats. We don't want them in permanently as we need space for lawn mowers,recycling and sometimes pets! Any suggestions, please

Well car seats are a legal requirement for children so you’ve got two choices really: keep them in the car or bring them indoors and put them in the car only when the children will be travelling. Or your daughter could hire a car while she’s here so the car seats don’t have to go in your car at all.

You do not say how old the children are, but modern safety seats for children of any age are not permanently fixed into cars these days and haven't been for several decades.

When my two DGC were toddlers the one set of car seats were toted around from their car to our car to their aunt's cars with no problems whatsoever. When they reached the age (around 4) when all they needed was booster seats (like solid seat shaped cushions) we just went to Halfords and bought two. They were not expensive and they live in the bottom of the wardrobe when not required. They will soon be unnecessary and will be freegled

Our GC live abroad so the car seats and booster seats are stored in the house between visits, along with all the other equipment needed for young children which is not practicable to bring on a plane.

Over 30 years ago my in-laws said that they would like to take to our two children out on day trips.
We agreed they could but would need car seats.
They refused Point blank even though we said we would buy and have them installed.

Result... they were never allowed to take their grandchildren out in their car

Today car seats are easy to remove from cars.
deaneke Do you put lawn mowers on your back seat?
Hope your DD and DGC have an enjoyable trip

Cherrytree, you need to flatten the car seats down to get a lawnmower in, obviously impossible if seats have to be permanently attached. However as all car seats are portable these days and only use the car's already built in car seat belts, the problem that concerns deaneke is no longer a problem.

We have bought 3 car seats (mum, dad, nana) because isofix fittings are not really moveable from car to car, are they? It was certainly less hassle with the small baby one which strapped in the car seat belts but DGS grew out of that at 15 months. Certainly no-one at Mothercare or Halfords said anything about moving the second size from car to car when they fitted them. Also I believe the booster seats now have to have a back on them, not sure when that becomes compulsory. We were not shown any car seats which fitted normal car seat belts in the age 1 to 4 years range.

You need to ask again.
I had a car seat for DGS which was easilybremovanle and fitted up to age 3 by which time he could use a booster seat (yes, with a back, ) but using the cars own seat belts. 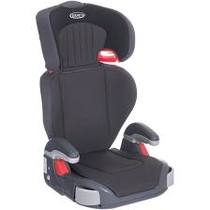 Sorry, I think he was 4.
Look at this one by Graco. I think that’s what we had.

I bought 2 car seats in Halfords that do from small baby to 12 years, apparently. They don’t use the isofix system, they are attached using the car seat belts so can easily be removed and stored when grandchildren not visiting. They are quite big and heavy, but I have a big shed for storage.

We have that one MawBroon and the bottom part detaches so that you can use just the bottom cushion when the child doesn't need the seat but does need the booster cushion.
It's fixed with the seatbelt, not isofix and was quite suitable from about age 3 upwards.

Yes, you can move the ones with isofix systems from car to car; we did when we had the baby seat but we used the seat belts as well (belt and braces).

Wow, thanks everyone. With this new information I will go to Halfords. I know my daughter has the fixed isofix. Things move on so quickly and of course safety is paramount.

We found Halfords helpful. They have a member of staff who specialises in baby seats. We have two very similar to Maws photograph, they stay in my car most of the time because they’re rather heavy and take up space in the house.

Just looked and the one I have is from KidsGarden and fits with seat belts. I got it from a friend whose DGC had moved on to Booster seats.
It is very useful indeed.

We had an isofix car seat in each car for our GD until fairly recently. Yes I know they can be moved from car to car, but we found it virtually impossible. Getting them out was easy; getting them back in, however, was an entirely different matter as the car's isofix fittings were so deeply buried it was extremely difficult to locate the seat fittings into them - and even when we did successfully marry them up, the amount of brute force needed to get them 'clicked' into place was beyond both of us. The only person who could do it was our son! Consequently we removed them only very rarely.
Now, thankfully, she uses one of the booster seats with back, secured by the car's seat belt.

We have had several different child car seats, all isofix, and they were easily removed and replaced.
Little booster seats are uncomfortable but probably are okay for short journeys. My GC is very tall for her age and reached the height/weight requirement at eight so does not require a booster.

I can only assume your car's fittings were easier to access harrigran. Honestly, my husband couldn't get them in, neither could I, and neither could a couple of friends who tried. Only our son, and I could see the amount of force he needed to exert to get them connected. Actually quite exhausting! One of the problems was that the isofix fitting towards the middle of the seat is right next to, virtually touching, the car's seatbelt anchor, so that we couldn't get our hands into the gap to guide the seat's fitting into place.

Oh and her booster seat isn't uncomfortable at all! It's a Graco, very similar to the one in the picture that MawBroon posted above. Very sturdy, well padded and she says it's very comfortable.

When my son and daughter in law came over from Canada with my grandchild they brought the car seat with them. You should check whether your daughter could do this?

You need to make sure any booster seats you use have backs to them as this is now the legal requirement.

If you are going to consider shopping for car seats, if you have the height, weight and age of each child the entire process is massively easier as it will eliminate the ones that are unsuitable or indeed illegal.

Bring the car you plan to put the seat in and ask the shop staff to demonstrate fitting it in your own car. This is super helpful if you are concerned about getting it in and out.

It is also especially important for seat belt only secured ones to make sure you are fitting the belt correctly as the fittings for those are not as obvious as the ISOFIX ones.

The shop staff should have had the training to fit the seats safely. Don’t buy a seat for under fours that you haven’t seen fitted.

If your daughter is doing extended rear facing with her little ones, it’s good for you to know that in advance too. She may not be willing to forward face them yet.

Isofix fittings do seem to vary from car to car as to how easily accessible they are. We use a car seat with the seat belt for our GC.

When the seats aren't needed we put them in the attic. You need to make sure any booster seats you use have backs to them as this is now the legal requirement.

That's not true CassieJ - the law regarding booster cushions has changed, but it is still perfectly legal to use them, in accordance with the amended law. See this section from the Gov.UK site on child seats (with my highlighting)

Dean eke, try going to Mothercare they are having big sales as so many shops are closing.

acquaintance pleading poverty to scam me ....

Growing up without going to shops

SUPPORT for all living with estrangement