Does anyone know what a very mild case of CV looks like?

I've had weird sore throat for the last few days. It's not really sore and comes and goes. I had a cough for a couple of days with light sensation of pressure in my chest but again not all the time. No fever. I have self isolated for the safety of others but I have no idea if I've got a very mild version of it or it's another bug.

Apparently, a lot of people will have no symptoms at all, so I suppose you could just have mild ones.

You’re being sensible vq everything I’ve read says what you describe could be a mild case. Hope it stays that way 🤞

Not “mild” but this 60-year old doctor has recovered.

Just a little out of sorts was how I felt at first. Initially, I thought I probably had a bit of jet lag.
Three days previously I had flown back from New York, where I'd been attending a psychiatry conference
As I left for home, New York declared a state of emergency because of the coronavirus and I felt relieved that I was escaping — I even went to the airport four hours earlier than I needed to, I was so eager to get home.
I didn't really know what 'a state of emergency' meant, and I was worried they might stop the flights.
I arrived back on a Sunday morning and went to work on Monday.
By Tuesday morning, though, as well as feeling rather tired, I had started with a new dry cough. Yet it was so mild to begin with, I barely gave it a second thought and put it down to the 'cabin cough' you sometimes get after a long flight.
Soon after that, though, I quickly developed a terrible sore throat. I know some people say you don't always get a sore throat with corona, but I did — it felt as if someone had put knives in my throat. And then the high temperature hit. I was feverish and got the shakes.
It was then I began to think: could it be coronavirus? I think I knew it was right away — but, strangely, I didn't feel scared, as I have no underlying health problems. I'm fit and I walk a lot.
I realised going to work was out of the question and I looked online for advice, as I'd been out of the country for six days and things had moved on rapidly in that time. Even I wasn't sure what the latest guidance was
Unable to copy and paste more, but if you Google Dr Clare Gerada I think this was in the DM.

I had an unusual sore throat in January. I rarely catch anything and this was unusual in itself but my throat felt 'blocked' and I couldn't swallow. I had to force myself to drink as it hurt and whereas the usual sore throat eases for a while while you are drinking every swallow hurt. Cold drinks, warm drinks or ice did not help. Strangely it was slightly easier to swallow food. This lasted for 6 or 7 days with a slight cough, though I avoided it when I could because it hurt my throat too. I had no temperature but I kept falling asleep.
I wish we did have an antibody test then we would all know for sure.

It's not easy to know, is it? I have read that in nearly half of cases there is some sort of digestive issue, and that not everyone even realises that they have symptoms.

I have been having what I can best describe as hot flushes - a bit like during the menopause. Not a fever, as they come and go, but when they are there I feel sweaty and a bit sick.

I have also had a bit of an upset stomach for a few days. It is nothing dramatic - a couple of Imodium is enough to keep it at bay, but it has been going on for a week or so with no obvious cause. I have a bit of a sore throat, but nothing to write home about. No cough, no serious aches and pains (apart from the ones I have usually, that is).

So, who knows? I would be pleased to think that this is a very mild dose, as if it is I have been spared the horrors that we have all dreaded, but until they sort out a test, I won't know.

This is an account of a confirmed case. Ill for 4 days but only mildly.

Do you know how that case came to be confirmed, Gagajo?

I think a problem with knowing is that as long as only people who are bad enough to be hospitalised are being tested, we won't find out what a mild case is actually like.

I have a sore throat today, and feel a bit weak, but it is really difficult to know whether it is psychosomatic, a bit of a cold, or quite what.

It would be so helpful to know if I have immunity, as I am staying in because of asthma, but if I knew I had had it and was ok I could run errands for others and help out.

I have had a sore throat for most of the last month or so, tummy upsets and nausea. I certainly don't believe I have the virus but I do think it is my body reacting to various coughs and colds that are going around.
A sore throat is your body telling you that antibodies are at work and that your tonsils are actually doing the job they are designed for.

Maw- I read the article today, reproduced in an Aussie paper.
Scary, but she made a full recovery so a good news story.

My daughter, 33, had a very high temperature for a couple of days, felt awful, lost appetite, glands up, sore throat. On the mend now but self isolating and assumes it was the virus. She works some of the time in London. 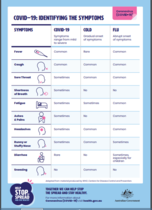 This chart might be useful. Hope you can enlarge it.

I have silent reflux and it manifests itself in the symptoms you describe. Some days it is better than others. When it was being diagnosed the medics said it is actually very common, so I don't think many people realise they have it. Try not to worry.

Thanks for the replies. The thing is, apparently a lot of people have the virus so mildly that they appear to be asymptomatic, so those who get tested because they are hospitalised are by no means the only ones. They are the 5% or whatever at the tip of the triangle.

I am not assuming I have it, or that I haven't. I would be pleased to think that I do, as if that is the case, I have got off lightly, but as has been said, until an antibody test is available we won't know if we are immune or not unless we are unlucky enough to get it very badly.

I also have silent reflux which did some damage to my vocal chords before it was diagnosed and treated some years ago. At that time I had a constant, irritating cough - drove my family mad! Now I have a slight 'frog' in my larynx, not helped by hay fever caused by tree pollens. Gaviscon Advance last thing at night keeps the reflux at bay.

Personally I would work on the premise if in doubt assume you’ve got it. Won’t do any harm and could prevent someone’s death

Oh, I am self-isolating anyway (if that was a reply to me

). I have asthma, and have been indoors since the weekend before last.

Assume you have virus if in doubt and self isolate, maybe get advice from nhs 111 online. Please always get advice if your having breathing difficulties as one of my family members found out that the earlier you find out from reliable resources such as nhs 111 / gov.co.uk when and how to get medical help the quicker you will be treated and hopefully on the way to recovery. You see my family member only had mild symptoms at first and it soon accelerated into them having breathing problems but thats down to the individual person and whether or not they have other health issues, my family member has angina. Yes they are in their late 70's too. But they were sensible and isolated themselves from when they first had sore throat and a cough, and has now with the wonderful care and medical help from the doctors and nurses in the nhs, been sent home to recover completely, they are still in isolation at home as we speak but alive. Please stay home, stay safe and we will get through this together. 🙂

I will keep a close eye on things. As I say, I have been indoors for over a week, and feeling marginally under the weather for a few days, so I'm hoping that if this is CV it is a very mild case.

If, however, it worsens, I will get help immediately. I have all of my asthma medication, and I will continue to take precautions. You stay safe too

lisawill ...good luck to your relative, pleased to hear they are on the mend

I suspect he got a test because he's wealthy.

Doodle dog how are you feeling now, I’m similar to you have got upset stomach for the last few days, been isolating for a while due to being high risk, no fever no cough snuffles though got the last two weeks

I read and have been told by friends who've had CV that an upset stomach is a symptom in about 40% of cases.

Doodle dog how are you feeling now, I’m similar to you have got upset stomach for the last few days, been isolating for a while due to being high risk, no fever no cough snuffles though got the last two weeks
Much the same, really. Still no cough, but I have had a sore throat all day, and a slightly upset stomach (nothing dramatic). The hot flushes haven't been so frequent, and my chest is still a bit sore, but again, nothing much, and I have a slight headache.

It is all very low level, but not typical.

I was sent this link (Daily Mirror) to mild symptoms people might not have thought were the virus.

It doesn't help to tell us whether we've had it though - we'll need the antibody test for that, and it's a long way off trickling down to the general public. I'm not sure if reports like this are helpful in the end - I hope people don't jump to conclusions and assume they can stop taking precautions.

Lockdown blues how are you avoiding it?

Is there any reason why children should not repeat a school year?