Sweden - the most tolerant of EU countries

Did anyone else see the recent anguished televised report on this embattled EU country? The Swedish police have posted an official report. swedenreport.org/2014/10/29/swedish-police-55-official-no-go-zones/

Sorry Celtic but I've searched both your links and can't find the police 'official report' which I would read with interest as have visited Sweden a number times.

I can't seriously accept Breitbart's take on the issue.

It could be suggested that the person (as far as I can see, identified only as "an American living in Sweden") who wrote the Sweden Report blog has his own anti-socialist, anti-immigration axe to grind. Incidentally, the article provided in the link dates back to October 2014.

Whoever he is, in describing his blog he says:

"Sweden is often used as an example that a heavy dose of socialism can indeed be combined with a capitalist market.

"As an American citizen currently living in Sweden, I find that the simplistic view outlined above is rather outdated."

In his final article of June 2015, "Goodbye Sweden", he reported that he was (surprise surprise)returning to the US, and further commented:

"I’ll be back in the US being mad at Obama for being a lying scumbag. And if Trump manages to get elected in 2016? Whoo boy. A racist ignoramus who takes pride in the worst qualities of a cranky eight-year old should make George “Dumbo” Bush seem like Abe Lincoln by comparison."

One wonders why, given his purported disdain for both the US far and centre right political current representatives (and no doubt his response to the centre left Saunders would be apoplectic), he decided to return there. Or perhaps he is just feigning political neutrality.

If Brietbart had anything to do with the report, I simply wouldn't believe it.

You need to verify it with other evidence.

I too like my sources to be ones I can take seriously.

I have a local acquaintance (so a N. Eastener) who is utterly convinced that there are no-go areas in Paris and London. I think he got his info from Trump's tweets or UKIP...

I wouldn't believe a word of Breitbart.

I'm awaiting the OP to post the 'official report' from the Swedish police.

There's a petition on 38 degrees about Murdoch taking over Sky.

'In less than 48 hours Rupert Murdoch could get the go-ahead to takeover Sky TV. If he gets his way, he'll control what's beamed into 22 million homes - making him the most powerful media owner in the UK.

Right now, Karen Bradley will be mulling over a report by Ofcom, the media watchdog, deciding what to do. She'll be wary about upsetting Murdoch. He owns newspapers like The Sun and can use these to pressure her. But our voices can drown him out. Thousands of emails, sent by all of us, will all add up to a powerful message: the public don't want Murdoch to get more power.'

Someone else you can't trust.

The Bravalla festival was held on June 29th. It's one of the biggest on mainland Europe, but,

"Following multiple reports of rape and sexual assault for the second consecutive year one of Swedens largest festivals has announced that it is pulling the plug on next years event"
Pretty serious I think you'll agree.

We all know that Birmingham is a hotbed of terrorist activity and full of no-go areas (or is that London/Manchester delete whichever is not applicable. )
If it keeps Trump from visiting the UK let them believe what they like.
I have just come back from a few days in Sweden and found its inhabitants delightful, hospitable, friendly and sorry to be losing us as a partner state in the EU.

One report of rape, so I read on the Local, not multiple.

Mawbroon, have you not noticed that the trump wants to sneak in a short visit on his way to or from France?
He's not telling us when, though, just in case we all turn up to say hello and he has to shake too many hands. 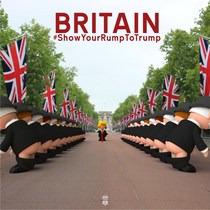 No, no!! We don't want to shake his exceedingly small hand or indeed any part of him!

1 rape, 23 sexual assaults according to ABC news. And British band Mumford & Sons boycotted the Bravalla event following sexual assaults and rape in 2016. How sad that the actions of so few have such an effect on so many.

By the way, what do you think the trump sneaking in and holding her hand will do for May's ratings now?

That's outrageous durham! So glad I sourced my information from The Local and ABC.

Although CBC says only 11 sexual assaults, not 23. No matter how many though, 1 is too many.

You should have read past the first paragraph, though, petra.

"Swedish authorities said one case of rape and 11 cases of sexual assault had been reported at this year’s Bravalla Festival, held from last Wednesday through Saturday in the town of Norrköping, according to the Associated Press. The rape victim was reportedly attacked during a performance by Swedish artist and event headliner Håkan Hellström on Friday. Other performers at this year’s event included American rock band The Killers, DJ duo The Chainsmokers, and Alesso, the Swedish House DJ."