Anyone watching? Not sure I’d trust either of them, but hopefully this will have a positive outcome.

I’m not watching but I did get a news alert on my phone . I think it’s a brilliant step forward towards peace .

It will be a good while before we know if it will be worth the paper it’s written on with two such unpredictable men.

I think it's going to be good if it works well. If either of them go back on their word then it will be awful for everyone but especially so for politics which is in a bad enough state as it is, in fact the worst I've ever known it to be.
In the Daily Mail (online) yes I read the rubbish as it's like a kids comic some days , there is a piece about this titled the 2 world's worst haircuts and they have swapped their haircuts ,made me chuckle anyway!

Trump has rubbished the alliances and agreements between European countries and the US after WW2. It was intended to prevent a megalomaniac to ruling a country with the attendant risks.
As he promised, he's bringing his dodgy business dealings into world politics. Dismiss and denigrate your closest allies and form some kind of alliance with a dictator. We have no idea what their agreement is, as always, Trump uses extravagant is simple language to describe his version. Maryeliza is right, it will be a good while before we know if whatever agreement is reached is to be upheld.

They’ve both got things to gain - Trump can show off that he’s brokered a big peace deal, and show off as the alpha male . Kim maybe can do something to improve the dire conditions inside his country if he can get sanctions lifted. Trump has shown disregard for agreements when it suits him , but hopefully they will both bask a bit in his very special bond.

Sadly I have to agree BlueBelle Trump is looking for public approval and is burning his bridges with Europe.

Not naive Bluebelle just ever hopeful .

Im.hopeful too but worried he will change his mind. At the moment he is basking in glory -he likes to be liked. I think he's hopeful of a Nobel Peace Prize. But the least little thing will make him change his mind and go off in a huff as he did after the G7 meeting. He is so unpredictable,it's frightening.

I’m afraid that from what I’ve heard about this so called agreement so far all that’s been achieved is stroking of both their egos and not much else if something approaching peace between them happens I will be very surprised.

I'm on a cruise which seems to be full of Americans. To our amazement most of them seem to be big fans of the tangerine one. We have been proudly told by apparently educated people that they don't watch or read the news or twitter, in fact have no source of information they 'just know' Trump is great. So sad. Scary too.

My overriding thought is that it's quite amazing it's going to happen. Love him or loathe him ( is there any in between?) Trump has achieved something other American presidents have not.

Then I remember the players involved and am quite fearful that one or both will have a tantrum and it won't be long before they're both comparing the size of their bomb buttons again.

I hope I've got it wrong and they can reach an agreement which brings peaceful communication to N Korea and the rest of the world.

It remains to be seen if Trump can call himself peace-maker. 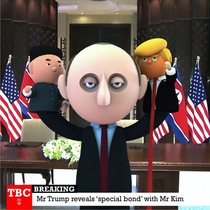 Just seen this on FB
Does it say it all?

Jane10 that IS scary, but not entirely surprising

I am cautiously optimistic. We are making judgments on newspaper articles and public statements. We have no idea what negotiating has been done in private. Whilst I find both men scary I am hopeful they both have sufficient brain power to understand that escalating conflict between the two nations is unthinkable. N. Korea must also be aware that any real aggression from them could result in a violent over-reaction from Trump which, although being condemned by the rest of the world, would be too late to save them.

Could it be NK has been bluffing all these years 're nuclear weapons.
Need sanctions lifted as country has had several bad harvests and people are starving.

I've disliked Trump so much that it's hard to be fair to him now. But I do have to admit that I think this meeting with Kim is a real achievement. On the face of it it seems to have been successful, but I'm very wary of the outcome. I hope for the best but fear the worst.

It would be wonderful if it all works out, like you gillybob I'm hopeful. No one would have thought this would have gone as far as it has so who knows how far it could go.

Nothing new in the document they both signed that hadn’t already been signed months earlier by Kim Yong and President Moon.

Both leaders need a grandstand moment and this is it.

Truth be told Kim Yong knows that North Korea cannot continue as it was under his father and grandfather. Sanctions were biting and despite his clamp down the younger generation are accessing information through the internet so they see what the rest of the world is really like.

Trump of course just blunders along and has been lucky to catch Kim Yong when he has sufficiently upgraded his nuclear programme to bargain from a position of strength.

Praise where praise is due, listening to DTs speech the way he came across on this occasion, I have to say he actually came up Trumps ?!
In his speech he said he usually can tell if someone is interested in a deal or an agreement & that if he senses they don’t he doesn’t bother wasting time trying to talk them around , he would rather leave it or leave it for another time. Which actually makes sense .

He changes his mind with wind. Last month he was threatening fire and fury he could again in no time.
He just needs a photo opportunity and publicity to redirect attention from his disastrous time at G7.
Anyone see that Steve Martin film 'the president's brain is missing'. Can't think why it's suddenly come into my mind.

I don’t think he s achieved what others have failed to, North Korea hasn’t engaged with any other president because they haven’t wanted to fail Unfortunately they know Trump is the weakest link US has ever had and they Can tie him round their little finger but he will always see himself as the saint and anyone who doesn’t agree with him as the sinners North Korea treats their own people dreadfully with non exsistant human rights an air head like Trump will be eaten like a frog eats a fly when they get what they want
Thrump thinks he and he alone will make NKorea a non nuclear country that’s a dream and can someone explain why America can keep its nuclear arsenal ?