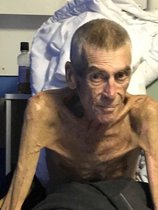 Please could all those of you who believe free, unregulated markets and low taxation for the wealthy and large companies are the answer to everything explain why this is happening in this country and why the review is being held in secret.

I think it’s extremely distasteful of you to appropriate this poor mans death,when you have no idea of the facts and before any inquiry has been carried out, just to support your own political views.

You could try reading the article Mycat before you spout off trying to put down debate.

I will certainly not apologise to anyone with your thinking for caring about what is happening to our society.

That’s a bit harsh mycat there’s been a lot of reputable coverage of this story and it’s very disturbing but whilst extreme, sadly not a one off. There are numerous documented cases of very ill people being treated very badly by the DWP.

It is indeed a sad indictment on the system as it stands. "Caring Conservatism" my arse!

Ok gran I did come across badly but I think it’s probably best to wait until the enquiry has reached its findings before discussing this individual case.

It’s absolutely legitimate to discuss the many shortcomings of the DWP.

Bless mycat you are a little innocent. The whole purpose of a DWP enquiry and especially one in secret is precisely to ensure that we never find out anything more about it and that we’ll just forget.

It's a DWP Review (to be held in private) not an inquiry, least of all a Public Inquiry - why is it best to wait before discussing this case?

Why don't you ask the DWP, in writing and give them 10 working days to reply.
Why tie the people who have the beliefs you mention (re tax) to a dreadful death which is being investigated.
Your thinking is skewed.

I don’t think it’s a DWP review in the normal sense as his benefits have been repaid - it is a sort of enquiry as they are looking into what went wrong (hahahahaha try the phrase hostile environment Amber dear) But either way discussing it will keep it on the agenda.

This is a political issue mycat caused by Tory austerity policies and DWP's inhumane treatment of the sick and vulnerable .I copied this from my FB page .

Contacted by an older man who was refused treatment from DLA to PIP, and had his ESA stopped as deemed ‘fit to work’ after medical. Diabetic. Very advanced nerve damage & severe circulatory problems. Client woke up 9 days after refusal and two of his toes had fallen off inside his bed socks.

His toes fell onto the floor. The circulation to those toes were so severely compromised, doctors had said they felt amputation would be the only option. Not that it was needed in the end as they had autoamputated.

Now working on appeal. People's lives are being SEVERELY blighted by the #DWP and this cruel and punishing Tory govt. Austerity was a choice to appeal to Tory heartlands. Many disabled and chronically ill people feel like they have a target on their back.

Whoever you vote for at the #EUelections2019 please don't make it the Tories, Brexit Party, UKIP or any other similar Party or person which would enable the Tories to continue in belligerence. Enough is enough! Sunlight is the best disinfectant!

Client fully consented and wanted this snippet of his story shared.

"I worked all my days till the diabetes got out of hand. If it helps someone else and shows the way they treat people then I want you to share it."

Oh, you do like to tell people how to think Gabriella, don't you and if that fails why not insult them?

I was asking about other people's thinking in this instance. I was not making assumptions. I was asking why those who believe in unfettered markets and low taxation for the ultra-wealthy, which have given us the sort of society that puts people through what this poor man went through, think it is the right way to run society.

I was also asking why this enquiry should be allowed to be carried out in secret. I could also have asked why we are just discovering that the numbers of young people kept in secure, mental health units with often untrained staff, far outweigh the number we were previously told about. I could also have asked why so many children go hungry in the 6th largest economy and I could also have asked ... But it is beginning to be obvious that the neo-liberal central tenet, pedalled in right-wing manifestos, that we can cut taxes and improve services is, and always was a lie, as was the misconception that only the wealthy, the entrepreneur can create wealth so we must sacrifice others in order that this should happen. People create wealth and all that we have seen since Thatcher has been an effort to stop their job security, their affordable housing, free health care and benefits and thus stop them being the recipients of the wealth made by their labour.

It isn't that the poor don't have enough Gabriella; it starts with the fact that the wealthy can never have enough and they don't care what happens to those they deprive of the basics in order to have it.

...and nurses in Scotland have had a big pay rise. Everything is better North of the border.

I asked the question. I did not tell anyone to do anything so don't skew my comment.
Anything with a ? after it is a question, not an order.

My life is finite as is that of everyone on earth.
I don't intend to spend my life worrying about problems in other countries, be it wars, inequality, human rights...whatever.
I live the best life I can and don't feel guilty if I have more than some and less than others.
I certainly wouldn't expect or want a wealthier person to sub me if I fell on hard times. They have, in all probability, worked hard for their money just as most of us have done.
My giving is UK based.
If other countries have misappropriated funds meant to help poor areas, that's the fault of their governments.

GabriellaG54 That is not a question it is a personal insult that suggests I am not thinking in the way you believe I should. I do appreciate, having read many of your posts, that you may not be able to stop yourself being rude but you really, really are very dictatorial and often quite personally aggressive. I get it. I have met people like you in the past. You don't agree with others even holding opinions let alone agree with those opinions but, on GN, as far as I am aware, we are all equal. You can debate my opinions any time but I will never let you get away with attempts to control what I think.

I completely get your gist GGmk3. The gap between rich and poor is ever widening in this country. The poor, sick and ill educated are being demonised to such a degree that the prevaling attitude is 'it must be their fault' 'why should I help' and 'they don't desreve it'. It makes me ashamed. Victorian values indeed! Working families struggling to pay rent, a decline in education standards, and are constantly squeezed, yes, underfunded NHS. It works for the top 1% if there is a decline in education and understanding. Easier to keep us in our place and fob us of with lies, which many lap up! So angry!

Gabriella its not the NURSES that refused the benefit..its DWP ...outwith our control for now

Of course the review should not be held in secret. That is quite wrong. We all need to know what happened with this poor man.They are covering their own backsides. Disgraceful.

Of course it's an utter disgrace, and unfortunately anything connected to the government immediately becomes a closed shop where mistakes have been made, it's absolutely sickening that there's never any transparency within departments such as those run by governments. They're all economical with the truth anyway !
I don't trust any of them. As if Amber Rudd cared----she didn't give a damn about the Windrush case so why should she lose any sleep over one person ?

I've already had my own personal grievance about the DWP on another thread.

It's probably because it's Liverpool ! A place that doesn't feature as far as those at Westminster are concerned.

However we may choose to describe GG54 we have to admit she's consistent!
Never budges from the position of "To hell with you, Jack. I'm alright!"

Being dictatorial means actually telling a person what to do - dictating.
Please note that nowhere in that post do I tell you what to do, I merely observe that your thinking (IMO) is skewed. That is, in no way, telling you what to do.

What is the purpose in holding this review in private?

Yes...because it's true, although those words are yours, not mine.
I can't help anyone else's situation nor alter government policy so yes, I am ok, because me and mine have worked for what we have and don't waste our resources.
We are not and never have been a burden on society and that leaves more for people who do need a helping hand.
I suggest that no-one could find that objectionable after all, we look after ourselves and family first and foremost, which is right and proper in my book.