The BBC have decided that free tv licences will only be available to over 75s who receive pension credit.
This will take effect from June 2020.
Everyone else will pay the full amount.

I agree with Riverwalk. The BBC should be funded from general taxation then voters may be able to exert some control on the ridiculous salaries paid to presenters.

I think the decision was a blunt instrument, lots of other options were not considered.
Raise the age limit?
Reduction for over 80s?
Free if you are over 75 and live alone
Disabled? Lots of other options I think.
Take a hit for half the loss of the money from the government and reduce some high salaries, expenses, allowances??!
I feel the BBC is a good broadcaster but they fail to deliver all the time -- at this time of year, we struggle to find anything to watch, Christmas has not been good for years.
Lastly the money the government has is ours from taxes, yet they act as if it's theirs!

Although I am happy to pay, I still say once you are given something it shouldn't be taken away

How much savings are you allowed before you cant claim pension credit? Really thing those who are very wealthy should pay their way. Honestly think all TV licences should be scrapped anyway

janeainsworth's comment about the image that's doing the rounds on facebook, is correct. Those who fought in WW2 and are still with us, are into their 90's.
I'm not a great fan of means tested benefits but so far as the licence fee goes, if you're eligible for pension credits, you don't pay for your licence.
. I have a state and work pension, so I'm in the fortunate position of being able to pay for my licence. In the 1970's I was a young parents 50pence a week above the threshold for reduction in my rates (later poll tax).
The BBC is important to me. I'd pay the licence fee just for Line of Duty.

In 1944 a 75 year old would have been a new born baby.
Only people who are now in their late 90 would have served in second world war.

My own parents would not have even been old enough to have served in the WW2 armed forces.

Yes Joelsnan, the state pension in the UK is one of the lowest in the EU. I recently saw a news article on television, can’t say whether it was BBC or not, but it was about state benefits. A lady was on complaining about her benefits which totalled £205 per week for herself and her one child. This amount did not include her housing costs, her rent and Council Tax were paid in addition. Her £205 weekly benefit comes out at £10,660 per year. If her housing costs were in addition the amount would be considerably more. Now, my point is this, if a lady with one child needs more than £205 per to live on, why do pensioners not need that much. Obviously many pensioners have paid for their homes already so they wouldn’t have large housing costs, but some have rent to pay, and others have large ‘service charges’ to pay for the upkeep of their sheltered apartment building.
I have a professional pension alongside my state pension, but many pensioners do not have another pension. I know they can claim pension credits, but surely they shouldn’t need to. Surely pensions should be set at a level that affords them the dignity of not having to claim another benefit.

I do think the photo is a little disingenuous.
Of the over 75’s who will now have to pay for a licence, very few indeed will have served in WW2.

Best suggestion I heard today on R4 was that every pensioner is given enough money on their pension to pay their own TV licence. Those who earn over a certain amount will pay tax on it,same principle should be applied to WFA.

Received the news on Monday that I could have my free licence!! Then watched the news!!
Ah well at least I’ll get one year free.

Granless
There will be a high proportion of pensioners surviving on just over the pension credit weekly pension threshold of £167.25, or have savings just over £16K. These people will be struggling to pay all bills already. When you consider most will expect to fund their own funerals from these savings a high percentage of pensioners are actually worse off than those on pension credit, especially if they need to maintain their own home.
Maybe all the 'perks' should be removed and replaced with a pension value that aligns to comparable other EU states.

Let’s get the facts right,
You only get reduced train travel with a Senior Railcard which of course you pay for. It operates on the same principle as the Young Persons Railcard the Disabled Railcard, the Student Railcard, etc etc etc.
Bus passes are only useful where there are buses (1 an hour in my village!) and yes, there is the winter fuel allowance which is designed to reduce the number of us freezing to death because we can’t afford the recent hikes in energy prices.
#justsaying. 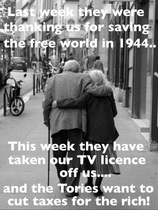 It should not be the job of the corrupt BBC to decide on who pays to watch or have a TV. This is NOT a BBC licence - it is a TV licence and the BBC are ruling the roost with the gift of government statute law. I stopped paying my licence many years ago because the BBC does not honour its charter, a contract with the licence payer. I am opposed to this autocratic bullying, inefficient, biased BBC.

I wondered how Ben Fogle’s scheme would work as well. Administering it could be tricky. Is anyone else wishing that all the criticism of taking away the free licence had been focused more over the years on wanting to have better state pensions for everyone so they could afford their own TV licence (and Sky, Netflix etc if they wanted as well). Some ‘causes’ like this become ‘fashionable’ and detract attention from the underpinning problem. I think this is happening here.

The 99 year old chap on Good Morning Britain today said that last week they were being patted on the head for their heroism in the war and this week they are having the licence taken away.

Pensioners who have worked all their working lives deserve some assistance in their old age and I am surprised that any seem to thing ink these small perks are unnecessary. I will not be voting for the government again.

True gilly I'm not sure how it will work

Pity he didn't ever think to pay for the TV licences of some young people, who's children will follow his program and rely on foodbanks for food. Still it wouldn't get the same publicity would it?

I wonder how he is deciding who to pay for? Some of the people over 75 could well be as well off , or more well off than him .

Maybe he is just feeling guilty for taking a huge salary from the BBC ?

According to press reports today, Ben Fogle is donating a year's salary from his work in Animal Park to pay for over 75s TV licences.

Welcome to your new board - Pensions & benefits advice

The Queen is in hospital