Watching the news this morning I became increasingly outraged at the Tory rhetoric. The Tories reduced the police force by over 20,000 between March 2010 and March 2018 but BJ is going to find the money to recruit 20,000.

Pritti Patel is talking about increasing stop and search. I lived in Brixton during the riots in the 80's and the behaviour of arrogant young policemen and the practice of stop and search at that time was one of the causes.

I just don't understand why the public believe the Tories. We've had austerity for more than 10 years which led directly to much of the disaffection that we've been seeing. The current front bench have been around for some, if not all of that time so why didn't they speak out then?

BJ is talking about building more prisons, giving money to the NHS (already earmarked), more money for schools etc etc. the current front bench have been in parliament for some, if not all, of the Tory administration. Why have they done nothing to change Tory policies and why are they doing something now?

B~J is talking about giving money to companies that suffer after 1 November. They don't need to suffer - just cancel it.

mumofmadboys - you are right about more emphasis needing to be placed on preventive services within the community - youth services have been cut to the bone; and mental health services for young people too - so many of the young prisoners are mentally ill or drug addicts.

I speak as someone who has a very close (adopted) relative who is in prison - this young person should never have got to the point where he finished up there if the services to treat his Aspergers and foetal drug/alcohol syndrome had been there. His sad troubled life has led him to be where he is at the moment, where he is being sold drugs, suffering extortion of money with menaces, being physically abused by the prison drug pushers - how can this happen you might ask? Indeed so - all this is happening under the noses of the prison officers who, one must assume, are in cahoots with it. Have we tried to get this sorted by reporting to the authorities? - indeed so. Did it get us anywhere? - no.

So - something has to be done. Maybe money is part of the answer; but governments giving a toss might also help.

That must be heartbreaking luckygirl. I have worked in the prison system. There are so many folk with learning difficulties and mental illness. I used to see the new admissions on a Saturday coming in on remand from the courts. One lad I saw had no-one to tell he was going into prison because nobody cared less. Sad beyond words. 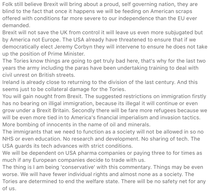 Unfortunately the Us and UK are currently swinging right-wing. In the US, I think it's a racist reaction to Obama (who I shamelessly worship).

Unfortunately here in the UK we haven't even had the intervention of a wonderful left-wing govt.

So much moaning about dishonest self serving politicians and when we DO get an honest one, he's reviled.

Boris is racist, sexist, homophobic. I can't believe he's our PM. I can believe he's going to drag us into Brexit regardless of the consequences. God help us all.

I spoke to a policewoman who had been a prison warder for 15 years before joing the police.She said that there were folk in jail simply because they had no homes or support outside it.That she had a lot of prisoners who would be convicted on a Monday and sentenced to 28 days ,,they would be released on a Friday and she knew without doubt they would be back on the next monday She said she had a great relationship with them because she understood where the problem was.Thats why she moved to the police force to see if being on the same streets as these guys could make a difference.

In Scotland we have more police on the streets now than 10 years ago and the intake at the college is a steady number ,all ages from 18 to 50 something this year ,People from all walks of life lawyers and ex military included .There are also many more women ,its been said that a 5 foot woman can diffuse a situation easier than a6foot man and it seems that it does work.Crime is at a 40 year low here with violent crime in particular knife crime a real success ,there wasn't a single death from knife crime in Glasgow in 2017 .I dont have last years figures yet . Yes Police Scotland have had some issues but its steadily settling in now as with all new institutions do ..it just takes time .Hopefully the successes will continue

If people make racist comments they should be called out, and not hide behind “everyone agrees with me” statements. Leave supporters complain about being labelled racist, but they should therefore challenge racist views made in their name and not just deny their existence, do you really think there are no racists in the U.K. who have used Brexit as a legitimate cover for their hate? Yes they do exist, I’ve seen and heard them.

It’s good that deaths from knifecrime is reduced in Glasgow but gun crime has doubled and drug deaths have increased, so it’s not an especially safe haven.

I find it incredible that with the NHS in its knees, police stretched, schools cutting hours, etc that this government seem to imply that it's nothing to do with them when in fact its been their own policy for 10 years! If only there were a credible opposition.

Daisymae, I'm afraid I no longer find it incredible. Lies – and subsequent denial, cheating, blaming others, manipulation, covering up – all is legal tender.

I read an apt statement some time ago: Quote: Politics is not a profession that encourages moral reflection or insight. “The ends justify the means” is good enough for most practitioners. End quote.

How about prison being a deterrent for a novel idea? No phones, no drugs, no automatic halfway releases (which was probably a cost cutting exercise anyway). Rehabilitation? Don’t make me laugh. Habitual offenders prove that liberalism towards the criminal fraternity isn’t working. It’s time to get tough and keep our streets safer.

Urmonstongran: Habitual offenders prove that liberalism towards the criminal fraternity isn’t working. It’s time to get tough and keep our streets safer.

But, Urmonstongran, the opposite appears to be true. The UK compares unfavourably with Scandinavia and the Netherlands when it comes to the number of people being sent to prison, rehabilitation and reoffending rates.

I believe that the Scandinavian countries are much more focused on equality in society. They have excellent childcare facilities which ensure that children get a good start in life. Also, there is an expection that fathers get involved in caring for children, they share the responsibility. We have done the opposite and cut support for families. Nobody is born a criminal. For some young people life presents many problems that they themselves cannot solve. If there is no safety net, no support network we should not be surprised that many get abused and drawn into criminality. I am certainly not saying that the Scandinavians have all the answers but I do believe we could learn from them.

It may be better than UK prison rates Greta but nowhere near Colchester, the Forces ‘glasshouse’ prison which is around 10% and the set up there is as far from ‘liberalism’ as you can get. They must be doing something right.

OP this is blatant vote-buying IMO ahead og a GE and designed to spike LP's chances.

The inmates of HMP Colchester aren't typical, as you well know.

My mistake. Colchester isn't even classified as an HMP.

You’ll need to expand Growstuff- typical of what exactly?

Read the article I linked, which explains why.

I agree they don’t call it a prison but criminals go there after sentencing for rehabilitation and training. It is not a liberal regime and the reoffending rate is a lot less than a liberal regime so they must be doing something right.

Quote: In practice it rarely exceeds 180 detainees, most of whom have breached military rules rather than criminal law, and usually holds about 50 inmates.

The chief inspector of prisons, Peter Clarke, said: "It was refreshing for HM Inspectorate of Prisons to inspect a training centre where drugs and violence were virtually unknown and where the culture is incredibly positive, forward-looking and not at all punitive”. End quote

If it is ”not at all punitive” perhaps it can be described as more liberal, wouldn't you say?

Try asking any member or ex member of the armed forces where they would prefer to serve their sentence, Scandinavia prison or Colchester to see which is liberal and which is punitive.

You cannot compare Colchester with normal prisons in the UK.

Firstly, inmates haven't necessarily committed crimes. They have been guilty of breaking military laws, such as insubordination.

Secondly, on average they do not have the problems with mental health and literacy, which are common in civilian prisons.

Thirdly, there is an emphasis on "correction" and rehabilitation and they aren't locked up for 23 hours a day. Yes, the regime is tough, but as military personnel, they will be used to a tough life. However, there are courses available, so if they are discharged from the forces, they have a chance of finding employment. Civilian prisons just don't have those resources available.

It might not be a bad thing if other prisons followed Colchester's example, but it would take a massive increase in prison officer numbers. I haven't seen any hint of the financial input which would be necessary.

Have you ever asked a member of the armed forces whether they would prefer to be in Colchester or an HMP?

Greta - you made a huge deal of Urmstongran comment on tougher sentences and threw in the liberal Scandinavia prisons and their better reoffending rates.

My point with introducing Colchester was that they had the lowest rates without the liberal regime and now you you don’t like it so who exactly is pointless?

Growstuff - I’ve answered your point in my last post.

Pantglas1, It would be interesting to hear your definition of ”not at all punitive” (said about Colchester).

I do not feel I made a ”huge deal” of Urmstongran's comment. Yes, I did compare our prisons with those in Scandinavia and tried to shed light on their belief in ”catching them young” rather than ”lock them up” when it is too late. You think that was unfair. Are you saying then that if somebody makes a comment we should just say ”Amen to that”?

I don’t agree with the statement that Colchester is ‘not at all punitive’. My point being that it IS more punitive with less ‘perks’ than UK and (according to you) Scandinavian prisons and with the much lower reoffending rate.

That's Nice or is it Marvellous, Brilliant, Kind, Comforting, Pretty ....?