The website set up to help holiday makers is actually really professional, informative and easy to use. Most people will be able to travel back home free of charge with only a few hours difference to their original return flight time.

But what’s the plan for the 9000 workers who won't get paid next Monday?

Pretty grim for them and its not easy getting your UC. 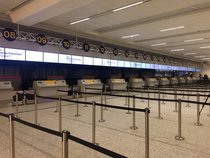 A very sad and eerie sight at Terminal 1 departures at Manchester Airport today. Twenty five Thomas Cook check in desks deserted after the collapse of the company..

No (or very little) UC if they have a working spouse/partner - just a massive drop in income.

I wonder if the Insolvancy Practitioner will be able to sell off the more profitable parts of the company?

To be fair, it isn't. Thomas Cook has been in trouble for a long time. It's a victim of online bookings.

It has been well known in the travel industry that they were no longer viable.

The worrying thing is that ATOL is still recovering from its payouts when Monarch collapsed. Not sure how it can weather this storm and the huge amounts of compensation involved?

They cited Brexit as a contributory factor. What evidence is there that if bookings hadn’t dried up because of Brexit worries that TC would still have gone bust?

The massive irony and sadness- is that Thomas Cook was the first ever to organise trips for others, first in the UK then to Europe and beyond. The Travel industry was born in Market Harborough and Leicester- thanks to Thomas. First for his Temperance groups in the 1840s, then to other UK locations- until he gave up his printer's job to concentrate full time on organising travel. The Paris-Bern line he used on his first trip to Switzerland, which had a massive effect on the future of the country- in 1863- still passes by our house several times a day. His first ever office, in Market Harborough is just round the corner from our UK flat- and I always used to admire the Frieze depicting his first major journeys, on his later main office near the Clock Tower in Leicester. Very very sad. 1841-2019

How can any export business deal with the massive fall of Sterling value? How can you plan? His first major destination abroad was Switzerland. In the last 10 years, Sterling has gone down steadily, and the Swiss Franc has gone up = the result is a massive 60% change. As a business- it is just not possible to deal with this- increases in cost at the time your currency declines so fast- and knowing it might get worse. For us on an individual basis- it is a disaster. For a business, it is truly the kiss of death.

Listening to 5 Live this morning, interview with a hapless tory minister about the collapse. He denied that it had anything to do with Brexit. Interviewer read him TC's statement from earlier this year which cited Brexit as one of the causes of the company's problems. Minister very silent...

So let's not have any wriggling over this, please.

I wonder how myna of us on GN have hesitated about booking hols this year or for next year, or indeed did not book at all - re concerns about exchange rate, health care provision, visas, driving licence validity, etc- and because money is tight too.

More likely to be people planning their own holidays, the hot summer weather, and possibly the large salaries enjoyed by Thomas Cook bosses, £20 million since 2014:

Thomas Cook's handling of the death of two children in Corfu in 2006 also contributed to their decline, plus increasing competition and a weak pound.

jura2 I have not hesitated in booking for next year, trips planned inside the EU and further afield.

I think the company has been hanging on by the skin of their teeth for a while because of so many travel agency shops closing to online bookings, thinking that going online was a safer bet than going into a shop which could be closed down overnight.
When big businesses start folding it does and has had a huge knock-on effect for others who are still struggling against high out-goings as well as the internet.

Brexit isn't helping one bit because of uncertainty with the economy.

TC was founded 178 years ago and like other large companies who've had the same recognition are all but vanishing from high streets and this country. It's the end of an era never to be seen again. Devastating. Sad.

Nah. Not buying it.

TC has been limping along since the recession. It almost folded in 2011. Billions in debt. Huge bonuses (millions) to CEO’s. Internet competition.

Brexit was only a twinkle in Cameron’s eye back then.

Why does everything have to be about Brexit?

I just felt sorry for the poor sods who have lost their jobs this morning which is why I put the thread up.

I’m out. We have enough Brexit threads already.

Urmstong 'Nah. Not buying it.'

Are you denying that costs have gone up hugely and that Sterling has gone down massively in recent years. Do you believe I am lying when I say the Pound has lost 60% of its value since we moved here- and that we have NO idea what will happen to it over next few weeks and months, making planning impossible. Really? When we came the £ was 2.50 ... it recently came down to 1.17. FACT. Buy it or not.

Why does everything have to be about Brexit?

Perhaps because it is?

It comes down to bad management, not keeping their eye on "cash flow".

Sterling has always fluctuated against other currencies, yes it is low at the moment, but greed over customers and staff is at the root of this.

This is not meant to be yet another Brexit thread it was about the collapse of Thomas Cook and its aftermath. I too feel for the workers and the loss of heritage - not to mention the Thomas Cook Travellers Cheques I still have .... online and the younger generations change of purchasing habits are destroying everything I hold dear .... but that's progress. Allegedly- oh well it's their world now and largely they are welcome to it.... I’m just glad I won’t have to live in it too many more years!!