Hubby and I have just got back from Parliament Square celebrations (stayed longer than planned as the atmosphere was electric!) - We all made so many new friends (both leavers and remainers) - Hellllllo to the "Backing Singers"!

And Tenby Angels Helllooo - Hopefully we will see some new members joining GN. (I've warned them about the welcoming committee, don't worry).

There is definitely a wonderfully, optimistic buzz in the UK!
I love this British wave of positivity.
Reminds me of the Berlin Wall coming down.

Well if you like the sight of shaven headed tattooed men with their shirts off drunkenly shouting “ f***ng do one” and giving Nazi salutes then I’m sure it was for you. I am not pedantic, but the spelling of “independence” is rather crucial .

You must be feeling brave tonight ananimous

Listen, 'leave' won, we get it
Please have some decorum
Just please try to understand that people are very worried and very uncertain
Lovely that you made new friends though ?

Oh and Farage singing the National Anthem almost made me heave

Oh dear - no, my soirree was a complete mix of both voters and we were all getting along famously - I did kiss Farage! ?? Lol!

Not a single fat baldy in sight!

Did they have a secret supply of epilepsy meds for 2021 onwards?

This feels more like a wall going up than the euphoria when the Berlin Wall came down and families and a country were reunited.

...And yes HE does smell gorrrrrrgeous!

It was a “knuckle dragging carnival” with shirtless drunks climbing over the statue of Churchill. Good report here with plenty of pictures.
www.independent.co.uk/voices/brexit-nigel-farage-parliament-square-a9312436.html

You must like the smell of beer and fags then.

Dollymac
You can live your life in worry and uncertainty but its the optimists who succeed because they are the ones who have the faith and confidence to try new things.
The UK has led the world for centuries with innovators and entrepreneurs, optimists who didn't shy from a challenge solved the problems and shared these with the world.
Many of the policies enacted in the EU were developed by the Brits. Much of the research, technology and security processes used by the EU were developed with a big dollop of Brit intelligence and ingenuity. EU officials have openly stated that UK was the country if reason within the EU often maintaining stability as well as financially contributing richly to the development of other nation states.
We should be proud of the contribution we have made to the EU over the years but recognise that it is a finite entity.

I saw a quote recently from Gorbachev he was wondering why on earth the EU was trying to replicate the USSR, many Brits also wondered that too and voted accordingly.

If I am optimistic will is prevent epilepsy med supply problems? 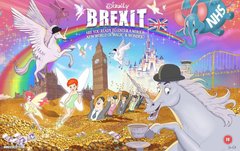 To be fair the news reports from last night (& vox pops - they should be banned) we’re pretty horrific. I was heartened by one leaver trying to reason with an Ann Widdecombe wannabe stamping on the EU flag screaming about the third reich, but not exactly overjoyed.

Does good old British stiff upper lip prevent seizures? I had no idea.

Nezumi65
Where do non EU countries get their medications from?
There us a big wide world beyond Continental Europe where there are medications for every need, many much cheaper than those bought within EU.

Have any of you used special paints for kitchen cupboards?

Why are we paying so much for energy when profits are so high?