Worrying on many levels - M16 say today that China covered up the coronovirus ?

Huge accusation.
There will be repercussions from this going forward I’m sure.
Some good, hopefully.
But some won’t be.

Fact: the virus started in China
Fact: they didn't contain it and eliminate it
Fact: they allowed it to travel to other countries
Fact: it is therefore China's fault

Mmm, but then if you were the person(s) responsible for this situation you'd feel deeply ashamed for the mess it's caused worldwide, wouldn't you? I know I would.
Perhaps if the Chinese made a public announcement as to exactly how it happened and said sorry - but I doubt that's going to happen. Such a secretive nation.

Meanwhile their shameful live animal markets where of course the virus originated, are STILL open despite worldwide condemnation.

I am sure they will be held to account eventually.

Something very fishy about this whole situation.

I'd like to think so but I doubt it Jennifer they're not held account for the way they treat people never mind animals.

If you were the person responsible for the situation and made a public apology you would be dead along with your family. The people who gave the alert were incredibly brave and should be given some kind of posthumous recognition if the can be identified.

The Chinese doctor who spoke about this virus before the Chinese government wanted to acknowledge it paid with his life. He died of Coronavirus caught through treating Coronavirus patients. He was only in his early thirties. He was brave because he alerted the world to the problem.

On reflection unfortunately you are probably right Smileless

The death of the poor doctor there who first tried to raise the alarm was very convenient for them wasn’t it?

The UN needs to step in and insist that these markets where wild animals are sold must be shut down or sanctions will be applied. The markets are all over Asia and Africa where it is known as bush meat. I am amazed that as the lock down in China is lifted so these wet markets are reopening. We all need to learn from our mistakes or pandemics will just keep happening.

Beijing's top officials secretly determined that they were likely dealing with a major health crisis on January 14, but President Xi only warned the public of the emergency on January 20, evidence has suggested.

Thousands of people were believed to contract the deadly disease during the six days in mid-January when the government kept the information from them.

During the six days, Wuhan, where the outbreak first emerged in December, hosted a mass banquet for tens of thousands of people.

ug your op was a bit disingenuous.

The MI6 bod said that yes, it started in China, and yes for a short time they failed to share the information.

BUT to play the blame game and cause division is absolutely the wrong path to take.

The world needs China once it begins to come out of lockdown and begin to face the uphill task of mending its economy. China is the only country in the world able to pull the world out of economic slump.
Power is gradually going away from the West and to the Far East and crises such as this speeds phenomena such as that, up.
China is also needed to help with African debt.

So be careful what you wish for, don’t be a Trump. We need China more than they need us.

We really didn't need MI6 to tell us that, did we? It started in China in December. It doesn't automatically follow that they are to blame, though.

Chestnut, you didn't add another important fact about China; they will eat all manner of wild creatures, bats, snakes, dogs, cats.........the list goes on! Any wonder the virus started there!

Didn't we already know this back in January ?
Apparently there's a ban on eating cats and dogs.

Bush meat is eaten throughout the world.

Farmed animals are kept in widely different hygienic conditions. Look at the fact that USA chickens are washed in chlorine because of such poor hygiene.
So don’t be narrow sighted and look at only China

China only recently passed a law whereby the killing of dogs and cats for human consumption is now illegal. One small step but I was so pleased to realise that the barbaric Yulin Festival will be stopped.

Hetty58 It started in China in December. It doesn't automatically follow that they are to blame, though.
How do you work that one out? Any country that allows a virus to escape its borders and travel all over the world is entirely to blame. Once the genie is out of the bottle it is impossible to stop. It's blindingly obvious they should immediately lock down the area and the country until the virus is contained and eliminated.

What do you think should be done chestnut?

TBH WW2 I don’t think there is anything we can do, governments won’t place any sanctions on China and the Chinese government don’t give a damn about world opinion. They are a very strong country and perhaps we should be more wary of them than we have been in the past.
Maybe if they admitted how many people have actually died from CV and also where they went wrong in the ‘cover up’ we might be inclined to forgive them, but they didn’t I’m sure thousands died in the first few weeks and it was hushed up. 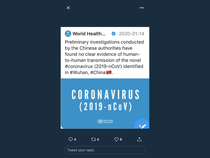 This is from WHOs twitter feed, basically China was lying and people are still dying!

This thread sort of engenders a feeling of despair in me. I really don’t see how China can ie will be held to account in any meaningful way eg how Germany was after WW11. The West has allowed China’s economic power to grow and grow, because it suited us despite their appalling ‘system’ of ‘Government’, human rights violations, repression of minorities, free speech and so on. Plenty of UK citizens have gone on holiday there in recent years ( which never fails to amaze me). It’s an appalling, dangerous country that we should never have got into bed with yet not long ago , we were hoping for amazing trade deals with them ( and probably still are). I guess we’ll get a lot of huffing and puffing about China and then it will be business as usual before too long.

Tell something to GET LOST

What do you collect?