An overview of what's happened just this week in government

1. Let’s start with the milder corruption: it was revealed Matt Hancock tried to block 400 homes and a primary school near Newmarket racecourse, after receiving at least £65,000 in donations from horseracing bigwigs who opposed the scheme

2. And then Robert Jenrick, the Housing Minister, overruled his dept and planning officers to rush through planning permission that saved Richard Desmond a £45m fee. Desmond is a billionaire pornographer, former-Express owner, and (subsequent to this) a Tory donor

3. The Tory Manifesto says: “we will offer more homes to local families, enabling councils to use developers’ contributions via the planning process”

4. The lost £45m was the “developers’ contribution”. One of Britain’s most deprived areas lost it. A billionaire kept it.

6. So this week Jenrick denied he had done anything wrong

7. Unfortunately, he had already admitted his actions were “unlawful” on 29 May

8. And then the business minister said voters could “raise their concerns at Tory fundraisers”

10. In Coronavirus news: Boris Johnson announced more relaxations of the lockdown, saying he would “trust the British public to use their common sense”

11. 48 hours later a major incident was declared on the South Coast, as 500,000 people common-sensibly crowded the beaches

12. Boris Johnson said he “would not hesitate” to bring back lockdown if the rules on social distancing weren’t observed

14. Then the govt announced councils would have the “power and resources” to enforce local lockdowns
15. But council leaders wrote to the govt to explain that they don’t actually have the legal powers to do this

16. And then 8 out of 10 councils in England have declared they are at risk of bankruptcy, having absorbed cuts of between 26% and 50%
17. Health leaders, including the presidents of Royal Colleges of Physicians, Nurses, GPs and Surgeons wrote to the govt asking for an urgent review of preparations for a second wave

18. The govt declined to do a review
19. And then the WHO warned of global shortage of oxygen and breathing equipment

20. So naturally, the govt opened pubs and cinemas

21. Then, after a month of not telling us the daily test numbers, the govt went a step further and cancelled the daily briefings altogether
22. UK Statistics Authority issued a 2nd official warning about the “trustworthiness” of the govt’s figures

23. Association of Medical Research said 74% of clinical trials had been put on hold in 2020 due to cuts

24. So we spent £900k painting a flag on Boris Johnson’s plane
25. And then it was revealed the govt spent £12m on the “world beating” contact app that didn’t work

27. The German app code is open-source, and the free repository for it lists 34 programmers
28. The UK has repeatedly declined to use the free German App

29. Boris Johnson claimed in Parliament that "no country in the world has a working contact tracing app”

31. The gov declined to publish its report on food and medicine shortage risks from no-deal Brexit, which surely bodes well.
32. Boris Johnson said Brexit must be delivered, as we have a “democratic duty” to listen to the people

33. A report this week found 9m voters – most thought likely to oppose the Conservatives – will vanish from the electoral roll when new Westminster seats are drawn up
34. When the govt (breaking pre-election promises) merged the Dept for International Development into Foreign Office 2 weeks ago, they said there would be no cuts to overseas aid

35. This week the Treasury asked govt depts to find "a minimum of 30%" cuts, including overseas aid
36. The govt continued to decry the removal of statues connected with slavery, as this might “diminish public knowledge of British history”

37. Govt cuts led to the closure of 773 public libraries, and I suspect many of them contained books about British History
38. The Minister for Arts said the govt was “committed to supporting the Arts Sector in through crisis”

39. Emergency funding for the arts (converted into £)

42. This week it reached 38°C in the Arctic
43. The govt said it would “fairly and courageously to maintain law and order” in the light of the #BlackLivesMatter movement

44. And then the govt announced it wants to abolish trial by jury in order to address a 41,000-case backlog caused by its own cuts

45. It's Friday. Not even very late Friday. There are 2 more days of this week to go.

Courtesy of Russ in Cheshire

I simply can’t understand what is happening to this country.

We seem to have completely lost our way

I’m too hot - my brain won’t compute tonight!
😊
I’ll read the list again in the morning MaizieD when it’s cooler.

We've had a nice thunderstorm that's cleared the air.

Thought it was all your own work at first MaizieD .....but no, it was good old Russ in Cheshire ( whoever that is.)

And is there no-one who voted for this government at all shocked by their behaviour?

It would seem not variun

I suppose their values and personal conduct is the same as they don’t seem to be shocked at all.

I am surprised tbh as I thought most people had higher standards.

All a bit yucky.

Does it matter whose "work" it was lemongrove? Do you dispute any of the information contained in MaizieD 's post?

It really is quite disgraceful the way this country is being run.

It's appalling.
It seems the Tories have realised they can get away with whatever they want, so they've become completely shameless.

I'll be interested to read different interpretations of all those things which were in the news this week, though.

When Piers Morgan and Nick Ferrari are criticising the government you know it must be bad.

So Maisie, your post is written by Russ in Cheshire! Words fail it's ridiculous.

Varian. The answer to your question is no.The posts on here reassures me of that,

Sparkling are you challenging the truth in any of the points made by Russ of Cheshire?

Ooh I can’t wait for Russ to polish off the week tomorrow with more iniquities! When you see it all listed like that, it’s quite shocking and less ignorable than if he’d just done a mini essay

Who is Russ anyway? Should I have heard of him?

I am shocked by the apparent lack of moral fibre so many of you display.

Do you really find the governments behaviour acceptable?

Perhaps you don’t believe it?

I can’t understand your mindset at all. I was brought up with a certain moral code, of course we all deviate from it at different times in our lives, but the consistent has always been an expected moral code in those who govern us.

When did it become acceptable to support such dreadful people?

Well if it’s written by Russ it must all be lies. He’s obviously a lefty, unpatriotic, miserable so and so who doesn’t love our wonderful government who can do no wrong etc.

Just looked him up and he’s not a lefty unpatriotic anything Varian!

He’s very proud to be a working class Manc!

What a fuss about the source of my post. It just seemed to be a good, and only faintly judgemental, list of everything of political interest that has happened over the week. I credited the author because I think it's most unfair to pass off someone else's work as one's own. I linked to his tweet so that people could look him up.

I just posted it here so we could see it all in one place.. Thought it might generate some discussion.

Thank you MaizieD it’s a good post and should generate interesting discussion. I am glad you credited the writer, for the reasons you indicate, then we can look him up, should we want to.

Paul
@PaulOnBooks
Am I understanding correctly Boris Johnson's plan to replace Galileo? He's giving £500 million of our money to a company that's filed for bankruptcy, laid off most of its staff and doesn't have the right technology anyway? 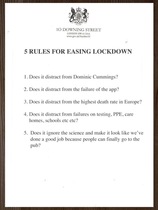 There is no question that our current government is an integrity-free-zone.

I find it deeply disturbing; what is more disturbing is that we are impotent to change this - our undemocratic voting system ensures that.

What hope for our dear GC?

mawb I find it all deeply depressing.

I think I must be old fashioned in my desire for decency and honesty.

What do you keep in your loft

What are you watching tonight?