A thought to share as we all settle down for bed 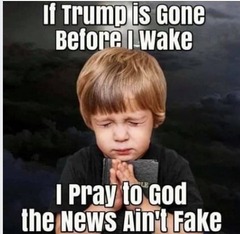 I know we’ve got lots of other problems to face but I feel more hopeful about many things than I have for several years.

I was living in another overseas country when we got the 2016 election results. An American lady cried upon hearing them.

Thank goodness we are through it. If only the UK was too.

Strange thing is, on Sky news tonight it seemed to be the Trump supporters who were carrying guns. Oh, and not wearing masks either.....

I think everyone is dumbfounded by the numbers, Sandycat- They are record-breaking- It wasn't a landslide win, but it was a fair win- Much like Trump's win was in 2016- Nothing was done differently- The only difference is who won- There is no evidence of a rigged election, but there is plenty of misinformation and rumors circulating and being generated-

I'm inviting you to produce more than a complaint-

Many Republicans voted a split ticket this election, they voted for Biden for President and then their choice of Republican representatives- Their votes helped tipped the scales towards a Biden win -- because they did "believe" in the process, and that when they cast their vote that it wasn't fraudulent-

Surely big difference from 2016 is that the candidate for President who lost actually had two million more votes than the candidate that won. This time the winning candidate not only won the electoral college votes, but also has has something like four million plus votes more than his rival.

You know before this election I had almost given up on the populist, nationalism in the U.K. with its division and hate, that was in turn reflected in the USA.

I really began to think that this was something that I would never see change in my lifetime.

But now I’m full of hope.

Hope that the division in our country will no longer be fed by the type of politics the government displays.

Hope that the values of decency and fairness eventually returns

Hope that the value of inclusiveness is embraced.

I am filled with hope.

Trumpet doesn’t want a recount in the states in which he won! Funny that! So no “ rogue” postal votes in those states then? The man is just a VERY sore loser, not surprising for someone with so little integrity.

Sorry Trump not trumpet phone changed it by itself !

Sandycat, your comment only reflects the lies, the continued attempts to cause division that have been an increasing feature of the Trump presidency. The man is dangerous. His supporters are out there, no masks, armed to the teeth. What good can come from that?
I'm relieved and pleased, feel some hope for the USA and its relations with the rest of the world.

Enormous relief is my feeling now.
I just hope someone has the common sense and decency to persuade him to go quietly.
He is a very deluded and dangerous man.

I think his advisors will counsel him to go - a big challenge for them as he is a volatile character. I suspect they are bracing themselves for the confrontation with him.

He will no longer be immune to criminal prosecution - happy days!

I wonder how long Melanie will stick around.

Sandycat It is over. Former President Trump will gain a few brownie points if he is gracious in defeat.

All eyes now turn to Brexit.

Trump throwing his toys out of the pram