The PM has announced a clap for Sir Tom at 6 pm tonight.

I thought the clapping idea had withered away. I’m from a service family and contributed to Sir Toms fund but won’t be clapping. That’s my choice.

I won't be clapping either. I have nothing against people who choose to do so but if we clapped for every victim of Covid every night it would take over 200 years.

I'm not clapping after someone has died. How disrespectful.
I don't believe in in anyway and preferred the 1 minute silence that was held earlier in Parliament.

I wont be clapping either I thought it became ridiculous last time,Nurses and front line workers denied a wage rise but go out and clap for them....Sir/Captain Tom 's fundraising went far beyond what he or anyone expected but that was due to his great age.There are people who have been fundrasing ALL their lives and get no recognition at all.My condolences to his family and all who loved him ,but I've lost a lot of friends and family this past year and nobody even mentions them except as part of the statistics

I personally agree with the 1 minute silence it pays respect perfectly.

I won't be clapping either. I did the clap for the NHS until it was taken over by the politicians who didn't seem as keen on giving NHS staff a pay rise as on clapping for them. I feel that this latest clap is just a disrespectful political stunt.

Give people bread and circuses to distract from what was really going on. A clap for a lovely man who raised so much for NHS because ten years of austerity by Tory government had stripped it bare. I don't think so. If he had announced he was giving the NHS the millions that he claimed leaving the EU would free up, that would be a different tale. I'll think of all the people who have died needlessly because of Johnson and his cabal of incompetents. 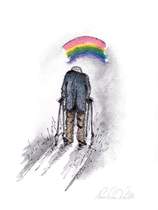 I think it would be a far better tribute to Sir Tom if we emulated him rather than clapped for him. I thought his achievements in raising funds was good but when I listened to his story about his wife, that brought me to tears. I thought that was far more impressive and spoke volumes about what a kind, positive role model he was. Had he been 40 years younger, I'd have been smitten!

A lovely picture Esspee. We wont be clapping either but I'm sure there'll be some who will and it's a nice thought from BJ.

no, I don't think clapping is appropriate.

Your picture is amazing Esspee

It did make me uncomfortable when people were lining the streets clapping when the corteges of service personnel killed in action went through Wootton Bassett.

What happened to a respectful silence?

GrandmaBatty I think the Foundation gives money to NHS Charities not to the NHS itself.
I'd rather see the money spent on all those flowers going to the charity too.

I suppose times change. I don't really like the clapping either but people can pay their respects however they want to really. Mourning is quite a recent concept too so we don't need to be burdened by what the Victorians felt appropriate, in my opinion anyway.

Well the media have filmed his grieving family clapping outside their home tonight, the day after he died for heavens sake

I saw on Twitter that his family requested it. I don’t know if that’s true. I’m not a clapper myself.

Yes, they were there clapping so they obviously approved this as a tribute to Captain Sir Tom.

As I was unable to do that, I will make another donation instead: I hope the fund goes from strength to strength.
It is separate from NHS funding.

What should be provided in the midst of an unprecedented pandemic?

Other charitable causes to help staff stretched to the limits during unprecedented times.

A wonderful man who will always be remembered for his care for others.

I agree Callistemon that the family must have approved if they were clapping. Not such a daft idea from Boris after all.

he should have been left to live out his life in peace.

He was obviously the kind of man who would do his utmost for his fellow man and woman, striving to the last to help, to be of service.

He fought to bring us peace and never stopped caring for others.

It’s sad that captain Tom died but no more sad than all the other amazing, wonderful and much loved people who died through COVID before their time leaving behind distraught families and friends. They were special people and heros in their own ways.
Captain Tom raised millions for the NHS, but was provided the means to do this by his daughter and the media. If the media hadn’t got hold of the story at a time when everyone wanted to help the NHS then his walk wouldn’t have raised more than a few thousand.
He seemed to be a very nice man who had an amazing experience in his final year. I hope that his family and the media leave him to rest in peace now.

I think Knittynatter summed up what I was trying clumsily to say. I wrote after a glass of wine and very upset with the government for its poor handling of the pandemic, where I have lost sadly multiple of my friends and family members. Head below the parapet now.

Ask a Question to the Person Below: 🧵 6️⃣