Well, after all the brou-ha-ha over the days since last weeks election I’ve been looking at the actual figures coming out, and they show that nothing was as good nor bad as the hysteria would claim.

No one would deny that these elections were set in unique times, and these circumstances hopefully will never coincide ever again. Two factors Brexit and Covid and the vaccine roll out. The vaccine roll has 88% public approval, and it is unsurprising that all opposition parties struggled to be heard under these unique circumstances.

But, looking at the results now, it is clear that the incumbents throughout the U.K. did not win by a landslide that given the circumstances you might expect, but in fact the gains rather than landslides, were in fact quite modest.

So first to the SNP, Sturgeon only increased her vote by 1% in spite of her apparent popularity.

Second the local elections. The key figure here is the projected national share of the vote, and an estimate of how the parties would have faired in a GE.

But, and here is the reason it is better to wait before getting to hysterical the result was neither huge nor groundbreaking for the Tories. In fact May achieved a better result in the 2017 local elections without the benefit if the vaccine rollout or Brexit.

Translated into parliamentary seats, this result would have sharply reduced Johnson’s majority.

The Tories also achieved much of their success due to the disappearance of UKIP and the Brexit party.

In 2019 UKIP took 26% of the vote. Their absence saw the Tory vote almost double.

But the absence of UKIP in the locals and bye-election in England and Wales has not shown the overall increase of votes that the Tories might have hoped for. Tory vote increased overall by 5% since 2016, with a similar increase for Labour.

There can be little doubt that the centre right hegemony has gained control, but it is by no means firm and there are signs of fragmentation in the south of England where the Tories lost seats in true blue areas where voters feel culturally alienated from Johnson’s type of Toryism.

Once the covid period disappears and politics begins to settle into a more smiler pattern both Labour and the Tories will find they have work to do.

There is everything to play for.

Some stuff taken from Martin Kettle 13/5

I would also add that there's been a move to the Green Party and LibDems in some places.

Although Labour is till the largest part on Sheffield City Council and the LibDems second, it's looking as though the Green Party might become the "kingmaker".

My area no longer has a Conservative on the county council.

There are other examples.

Or PR?
not the non-PR version offered by the coalition government

Is it too much to hope for that there might be a slow burn grassroots revolution?

I can't see an official Progressive Alliance on the horizon, but a fightback by local politics could influence central government in the long term.

Our undemocratic FPTP electoral system is directly responsible for the confrontational twp party system which has served us so badly.

Neither the Tory Party nor the Labour Party has ever wanted to change it as they see it as being in their own interest. Even now the LP may still think that sooner or later they will get back into government on the basis of a minority vote. The Tories are now proposing to make FPTP mandatory for all elections in England.

Both these parties treat smaller parties with contempt, generally ignoring their existence as far as they can. Voters who would like to support the Liberal Democrats or the Greens often, especially in two-party marginals, vote tactically for whichever they regard as "the lesser of two evils" and so their votes are suppressed by FPTP.

We hear the LibDems written off as "a spent force" yet 17% of the votes would mean 110 MPs if we had a fair system of proportional representation, as we see in true democracies.

The layout of the House of Commons is deliberately confrontational with opposing sides sitting two swords lengths apart. We are told that the building needs £billions spent on it. Surely it would be better to replace it with a new parliament chamber arranged in a circle or semi-circle which encourages co-operation and is a hallmark of all modern democracies?

That's not going to change for the foreseeable future, so anybody who believes in more moderate, accountable politics is going to have to work with the system we have.

Are there any current examples of people who won local elections who wouldn't have won in a FPTP system? I don't know of any, but there might be some.

Incidentally, does the Conservative Party have plans to change how it chooses its own leader?

In the English Mayoral elections second preference votes were counted if no candidate achieved 50% on the first round. We cannot say whether any of the results might otherwise have been different.

In the English Mayoral elections second preference votes were counted if no candidate achieved 50% on the first round. We cannot say whether any of the results might otherwise have been different.

All very well chucking all these figures around but I would be more concerned about the low numbers of people that have actually bothered to go and vote at all!
In my area, there was a lot of people that had asked for a postal vote and didn't get their papers - so that meant they were not able to vote at a polling station at all !
There will never be a true result for any election until it is made compulsory to vote - just waiting for the complaints from those that just didn't bother! 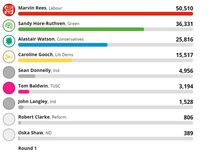 Marvyn Rees won Round 1. The system meant that the top two in Round 1 had to have votes counted in a head-to-head.

Looking at the final results, the gap between Labour and the Green Party was about the same in Round 1 and 2.

Rees would have won in a FPTP contest anyway.

It would be a start, wouldn't it? There's not much hope of Labour forming any kind of Progressive Alliance, if they can't even form an alliance within their own party.

I think there's a strong argument, but I still can't see it happening.

When Labour friends tell me that Starmer is the 'enemy' and not 'Johnson', I really despair.

And they do not seem to realise at all what the First Past the Post system means. And that is that divided Labour, and even a united Labour that refuses intelligent alliances, means that they hand over to Tories, again.

A week in politics is a long time let alone three or four years.

To have a Progressive Alliance politicians would have to put their egos to one side, unfortunately I cannot see that happening any time soon.

Until politicians of ALL parties put the electorate first and foremost nothing is going to change.

A week in politics is a long time let alone three or four years.

That was very profound

It was obvious, of course Whitewave but needed saying all the same.
I think you are straw clutching at the moment and who could blame you, you must think that Labour is doomed ( maybe they really are) they have been out of power for so long and it isn’t looking good for them

I cannot believe it!!

Wordling around the world 2

Christmas is . . . just around the corner . . .apparently

Going back to where you were raised