“Johnson is … the most accomplished liar in public life – perhaps the best liar ever to serve as prime minister,” he said. “He has mastered the use of error, omission, exaggeration, diminution, equ

When so much political invective these days, is crude and badly written, and the writers take pride in their ignorance this piece is a joy to read, on so many levels. As much as anything I am in awe of the style and his command of the English language. Apart from the style, the content, as political invective, puts Rory Stewart up on a level with Disraeli.

He is, himself a man with a checkered history (as was Disraeli), but I just admire the style, the language and the truth of this para from a longer review.

I haven’t read the article MOnica but will do on your recommendation.

I must confess to being a huge fan of Boris. I think he’s an extremely intelligent man who has a very cleverly crafted public persona.

As for people believing he’s less than truthful, I think that allegation could be made against every public figure regardless of political affiliation since the year dot.
I think whichever party was in power during the COVID crisis and however they handled it, there would be the same allegations, distrust, and anger. We are living in unprecedented times and personally I think it will get a lot worse before it gets better.

I stopped voting Labour after Blair. My family were Labour historically from the time the party was founded but they would turn over in their graves at what the Labour Party has turned into.

I respect your views Infinity, but I think Boris is a liar of Munchhausen proprtions en.wikipedia.org/wiki/Baron_Munchausen

No one with any awareness will not be surprised at Stewart’s analysis of Johnson’s anti-social personality disorder, but for the Tory party to install him as leader with the full knowledge of his incapacity and sheer lack of ability shows a cynicism one would hope would never enter the political arena.

MOnica - you’re going to keep me busy all day !
That looks really interesting as well ! 💐

I always like Rory Stewart. After he dropped out of the leadership election I wrote to him to tell him that his day would come. I hope it does.

Am not a huge fan of Johnson but he managed to finally get us out of the EU, whichever way you voted in the referendum at the time, it has to be acknowledged that Parliament voted to implement the result ( then collectively tried to backtrack.)
So plaudits to him for that.As for dealing with the Covid Pandemic, there may be areas that come under the ‘doubtful’
Heading, but overall think he and the Cabinet have done well.
Does he lie? Does any top politician? The answer is undoubtably yes at times, to both questions.Economical with
the truth, evasive when pressed for the unvarnished truth, yes again.
David Cameron and Tony Blair were simply so much better at hiding it, smooth, urbane and charming and loquacious.
Rory Stewart is a very intelligent man and a very disappointed one, running against Johnson for the Leadership and then leaving the Party to run for London Mayor. Both bids failed.
He never had a chance at winning either.He dislikes Johnson so much that he became a backbencher ( after holding a ministerial position) when Johnson became PM, then later stood down from being an MP to chase the Mayoral position.
So, he does have an axe to grind remember.
His constituency was very disappointed with him for leaving.
I haven’t read the article M0nica and am sure it’s extremely well written as you say (Eton and Oxford background) but at the end of the day he is a bitter man.Politics is a funny old game ( to nearly borrow a phrase)😄and if Stewart had been better looking with a tad more bonhomie he could have done really well.

Crikey you have odd taste lemongrove, he is much better looking than Johnson of we are going to be shallow. He is very popular on MN

Yes Algerias jeezy peeps nothwithstanding, looks do matter in politics. They shouldn’t do, but they do.

I used to have a huge thing about Alistair Campbell

‘Politics is Show business for ugly people’
Who said that?

Nothing to do with my taste Galaxy it boils down to public taste when cotes count.
As poor old Ed Miliband found out. 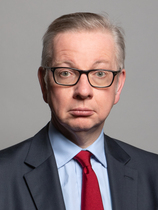 A lot of liars seem to get elected in this day and age. It seems to be what the public want. All mouth and no trousers as they say.

Yes, Gove suffers for the same reason Aleg ...which is why he has no chance ever of becoming PM.

Yes I am saying that lots of the public if MN is anything to go by find him very attractive. I think you do seem to put too much emphasis on looks in politics when there is little evidence for it, Johnson, Major etc, none are particularly attractive in a conventional sense, I think charm is a different matter.

I'd say they're all liars - or at least 'economical' with the truth. What strikes me about this lot is the 'bare faced' aspect, the complete, unashamed audacity, impudence, the taking us for fools!

Who here votes for a politician based on their good looks? That was a funny old suggestion.

Well given he's Chancellor of the Duchy of Lancaster and got there even though he was an adopted baby and his dad ran a fish gutting business, I think he's done pretty well for himself. That's the closest he's going to get to an endorsement from me.

That was for Lemongrove

It's an interesting article, but doesn't say much more than I already know about Johnson. It isn't the lies that so much bother me, I've just accepted them, it's the uncritical attitude of British media I find disturbing. For instance Brexit- lemon has posted that he got Brexit done. Well he did, but not really because he left the huge question of N.Ireland unresolved, but the press seem happy to disregard that. His other cock ups seem to be similarly ignored, almost as if the right wing press don't want anyone to think badly of him.