Afghanistan "How can I help?"

I recently commented on a post “To want to weep for the girls in Afghanistan” and as a result I received responses asking what, if anything, Gransnetters could do to help alleviate the plight of the Afghans. To the best of my knowledge, the Norwegian Refugee Council www.nrc.no/perspectives/2021/on-the-brink-of-a-major-humanitarian-crisis/) is the only relief organization in Afghanistan with ‘permission’ from the Taliban to continue working in the country. Any donations will be put to immediate, on-the-ground use rather than being held back until the situation becomes clearer. Of course this could change at any moment. I hope this is useful for those OPs who would like to donate.

Yes I have done so already. It was the only one I could find.

BBC's Breakfast has done an interesting piece about 7.15am as to what people can do to help those refugees who arrive with nothing.

Several collection points have opened up here to take over to a larger site near Manchester airport. Someone on this estate is co-ordinating all our efforts over the weekend to take there. Probably the same in most towns.

The link didn't work for me Chapeau so I'm posting this one, which did. Hope that's OK. 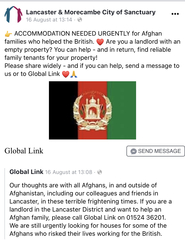 DD sent me this link yesterday. She says it’s amazing what people are offering. It’s been on the go for various refugee crises for a long time.

I used to contribute to the Norgrove Foundation which was set up to help girls and women in Afghanistan. I don't know what will happen to that now. They were doing such a great job too.

Chapeau,where did you discover that they are still working there please?
So many others are trying to "escape".

I signed a petition and made a donation to the charity I support in Afghanistan.

NotSpaghetti I have friends and former colleagues (Afghan & 'Western') currently on the ground at the airport and in town. Two of them, employees of the NRC, told me this a few days ago. They also sent me a link to a Twitter post from the NRC: mobile.twitter.com/nrc_norway/status/1427328595257593859 which suggests this is correct. I haven't heard from them since and can't get through to them at the moment. I keep trying.

I understand, watching a video from Nowzat an animal rescue organisation, that all the Banks have been closed and they, like so many others, cannot access donated funds to buy food or medicines for themselves or the animals, any more than anyone else. The blame has been put firmly at the feet if Biden and the USA.

Thanks for this information - just what I wanted. However, I’m having trouble donating through the NRC page…..there doesn’t seem to be a credit or debit card option and the screen is asking for an IBAN number which I think is an international bank ID (?). Has anyone donated successfully through this screen?

Yes. My husband did.
I'll ask him how he did it.

From what I have seen on the news it was Trump that made a deal with the Taliban to withdraw at the end of August it looks chaotic over there as no plans were made to get people at risk out, they are certainly going to need aid food and medical help it's one of the poorest countries,

Yes it was Trump. And he did it unilaterally. But we've had months of planning and if course Biden just went along with it.

Sheila My husband said he used his bank card here:
www.nrc.no/
As a one-off donation.

Many useful things listed here that you can do if you want to make things better for refugees (from many places, as well as Afghanistan). I would only add 2 more

- don’t support charities wanting to charter flights to bring rescue animals back. That shouldn’t be the priority over humans.
- don’t ever vote Tory. It’s the Tories that have created this awful toxic culture that demonises refugees.

On a longer term we need to support governments systems that are clearly not controlled by religious groups - our own hard won 'separation of powers system, the French laicite system and similar. NOT anti religious, but FOR equal representation of all adults.

Millbrook I think you’re wrong on both counts there. It’s not the conservatives fault this has happened! And nowzad are trying to get their Afghan staff to a safe place . It’s run by an ex marine who is British. Having watched his blogs about being in Afghanistan at the moment , I can assure you that all the blame lies with America for this unholy mess. They have no money because Biden has closed all the banks and only British troops are actually out and about rescuing people. The yanks aren’t allowed to leave the airport! Get your facts straight please

That’s a bold statement, Millbrook. I know many Tories, and those of no political persuasion, who have done amazing work for refugees. It’s a humanitarian crisis not a political one.

Well I've donated to Nowzad and another small animal rescue. Although they don't take priority, they are innocent in this heartbreaking shambles and a lot of people fleeing from the country have had to abandon their pets which adds to the tragedy.

That’s a bold statement, Millbrook. I know many Tories, and those of no political persuasion, who have done amazing work for refugees. It’s a humanitarian crisis not a political one.

Regardless of the many decent tories who exist, it is our current tory government that has exacerbated this crisis

And created the toxic anti-refugee culture that Millbrook cites.

Perhaps as this is a page about support for the Afghans we should stick to that rather than politicising this thread. It doesn't matter who made the problem, we have to help those caught up in the situation.
There are several areas, like Portsmouth, who are receiving Afghan families and there are local drives for donations of clothing, etc.

How about offering to house them in your own homes seeing as we are so short of housing and infrastructure already. I am sure that is the best way to help.

Many useful things listed here that you can do if you want to make things better for refugees (from many places, as well as Afghanistan). I would only add 2 more

- don’t support charities wanting to charter flights to bring rescue animals back. That shouldn’t be the priority over humans.
- don’t ever vote Tory. It’s the Tories that have created this awful toxic culture that demonises refugees.

You should have added In my opinion before your two suggestions.

Nowzad have funds now due to the last 7 days of donations to charter their own flight from Afghanistan for the 70+ people that work for their charity in Kabul, their paperwork is with the appropriate authorities and being processed (from what I understand). The plane will accommodate more than those 70+ but there will be space to convey the animals that have been treated by Nowzad. It's not a flight from the public purse, it's not a government flight, it's theirs alone. It is a plane chartered by Nowzad. The people on that flight will have been processed by the authorities. There are funds in place to cover the expenses of those 70+ when they reach wherever it is they are going (Pen Farthing isn't telling, but I have a feeling it's not UK bound).

Both Biden and Johnson have said there will be flights for those who have been correctly processed by the authorities.

I don't know if I've made that clear?

Loss of my parents