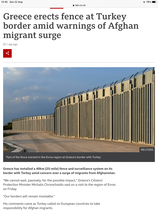 I have just seen this on the BBC website.

Seeing the footage coming out of Afghanistan, I just cannot imagine how refugees would feel after fleeing the Taliban, making there way through Turkey only to be met with a wall of steel?

Well that’s the first I’ve seen of it and I AM outraged. Is there silence ?

I’m outraged by it but nothing to do with the “EU member state” aspect.

It's awful I am not sure there is silence.

It’s not just a wall
The eu have poured $3 billion + in the high tech on this wall
The purpose being ( in their own words ) ^there will not be a repeat of 2015.
More details here.

Greece is still coping with the influx of refugees it had previously, so many of them in 'temporary 'camps. Very little aid forthcoming from the EU as they had promised, probably because Greece still owes them money. What a mess.

But at the bottom of all this is Biden, who seems frighteningly unconcerned by the chaos he has caused.

That's right eazybee Greece is in dire financial straits and no help available. What a dreadful situation all round.

I don’t think Greece will ever repay the debt.
Never mind, German banks have made a nice profit.

But there has been surprisingly little comment about it.

I feel sorry for Greece, an EU country which has accepted more refugees than anywhere else and is struggling.

I don’t think Greece will ever repay the debt.
Never mind, German banks have made a nice profit.
Germany has profited massively from Greece over the years and it goes back a very long way indeed.

I never thought I would see another physical wall in Europe once the Berlin Wall came down.

well it doesn't seem all that surprising to me.
although i think it spoils the look of the countryside.
and i have great sympathy for refugees. not all of them trek across continents. there are all sorts of refugees.
i'm a bit surprised that so many borders are quite so open.
but this has been widely reported. in the news since last week.

I imagine that "people" are coming to terms with it. I didn't know anything about it until I saw it on here. Obviously, you did. Hopefully, it will allow those fleeing to be spread to other countries but we will probably have to wait and see and not jump to conclusions.

What I haven't seen is the denigration of the refugees that Trump undertook re those coming into America. That was the part of using "building the wall" as a rabble raiser for the election which I for one certainly what I found disgusting - the wall was never likely to be completed. A bit like the thought processes of Trump fans.

I think you’ll find Sweden and Germany settle more refugees than Greece. Perhaps you’d like to bash them for that. More may arrive in Greece but they don’t all settle there. We all know walls aren’t effective in the long run anyway.

Greece isn’t the only country to build a wall to keep out migrants.
It really is going to fortress Europe on their eastern borders.

This has been going on, in one way or another, on the Greek/Turkish border for ten years. Questions have been raised in the European parliament and the Commission has made it clear that, while it has no legal means to stop it, they are against it and, in any case, think it probably won't work for all the same reasons as people said Trump's fence wouldn't work.

Just because the UK media has not brought it to your attention is not the same thing as silence.

And let's be clear what a higher level of intervention would mean - it would mean that the EU would need increased legal powers to intervene on the sovereign territory of member states, and it would need the means to carry out this intervention, for example direct control over a country's police force or armed forces, or an EU army. Is this what you are proposing?

I didn’t know about this either Pippa. I’m not sure how I managed to miss it if it’s been in the news for several days. However I did see something about Hungary building a fence/wall. Maybe that was a while ago, I’m not sure. And I saw about Belarus forcing migrants on to Polish land but the Poles were not allowing them to cross over, so they were stuck in no man’s land, between the two countries. Not very charitable of either country.

Poland have also erected a fence 'to stop movement's ?

What was the first film you ever saw in a cinema?

A sad bunch of Birthday Flowers

Are you still in your dressing gown?