The reason why the Boris and Carrie story was pulled

The real reason why the story about Carrie being offered a 100k pa job with Johnson was hastily withdrawn from The Times is now revealed - they were caught in a compromising position on his office sofa ( think Bill Clinton and Monica L , or maybe think BJ). maybe you don’t want to have that mental image or maybe it’s hard to swallow. Carrie must have a strong stomach is all I can say.

Why would that make them pull the story?

Yes I have heard that too. It's like an episode of The Osbournes.

Matt Hancock resigned after a similar incident but of course BJ won't resign over anything.

Matt Hancock resigned after a similar incident but of course BJ won't resign over anything.

He was cheating on his wife, but probably the others you mention, too...

Yes I think it was on a slightly different scale. 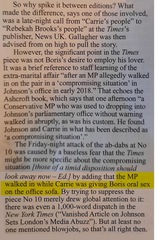 Yes I think it was on a slightly different scale.

All the more reason for a resignation.
How many people would get away with being caught having illicit sex at work?

That's my nightmares organised for the foreseeable 😢

Sorry doodedog. It has put me off my lunch.

Wasn't that 'what done for' Bill Clinton?

A Tory Mp walked in on them, allegedly.

I can never unsee that in my mind now.

Johnson's wife was undergoing treatment for cancer at the time.

Carrie was with him, without security clearance, in the Foreign Office premises.

Although the 'offence' was the same as Clinton, Clinton's problem was that he denied it had ever happened. Just like Johnson did when questioned about allegations of forcing a previous mistress (Petronelle Wyatt) to have an abortion. Michael Howard fired him for lying, not for what he did.

Oh, and thank heavens for Private Eye who are not cowed by pressure. I expect Mad Nad will try to shut them down.

And once again, we wonder what does this disgusting, lying, cheating, lazy narcissist has to do before his party realise he’s not fit to be PM

And once again, we wonder what does this disgusting, lying, cheating, lazy narcissist has to do before his party realise he’s not fit to be PM

I think he could wriggle and lie his way out of almost anything. Like Larry the cat he seems to have nine lives.

I never can understand why any woman would do that.

Oh dear. I feel a bit faint at the thought

I never can understand why any woman would do that.

I can't imagine anything more ghastly than getting anywhere near Johnson's nether regions. 🤮

What did you want to be when you grew up?

Grandkids are locked in their bedrooms

Do you bother to check out Links?