this tidal wake of woke nonsense has to end, many of those fighting these ludicrous battles dont seem to know what they`re fighting for anymore, Just take the new advice handed to university lecturers at Imperial college london, They have been told not to compliment foreign students on their english, .Apparently it could be considered a racist micro aggression. how absurd !
you would have thought a nice bit of praise from a teacher would be welcomed if you had taken the effort to learn a second language, but its just another sign of these ridiculous times we live in, Institutions are so concerned with avoiding every little PC pitfall that they`re tying themselves up in knots , our universities are supposed to be full of the brightest and best academics , yet all many of them seem concerned about is dodging proverbial bullets from snowflakes

This NOT correct.
There is a short course on microaggressions which shows examples related to RACE, not nationality/first language. So complimenting a BAME person on their command of English or on being articulate would possibly imply BAME people are generally inferior in that area. Nothing is said relating to “foreign” students. 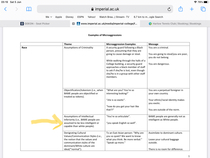 Forget about it ending anytime soon, the wokes are in control and the media are leading the wokeism, go with the flow and don’t make waves.
It’s best to take advantage of any trend not oppose it.

I would hardly consider the media is peddling woke given the racist and sexist drivel my husband continually spouts that he has read from certain uk newspapers. It has begun to feel like he has been radicalised and I dread to think of him getting hooked on GB news.

Earnshaw and Katie - I think this is simply a misunderstanding regarding the Imperial College training. Please read the explanation given by Lucca.

Thank you Notspaghetti. I’m getting a tad fed up of inflammatory threads started, often by posters who then never return to back up their claims.

It goes to show how people can easily be brainwashed and controlled. I find it quite scary that folk have been indoctrinated in this way like you would a robot and commands.
Sickening !

This whole change of social attitudes is responsible for the high rates of crime that we're seeing and has created a huge division plus confusion in those whose lives have been twisted Orwellian State.

Ellan did you read my post? The information in the OP is incorrect as is the reporting of it in the Telegraph etc.

Interesting, what newspapers are those.

This sort of OP on GN frightens me. The far-right are coming out of their bunkers and spreading these lies and even grannies are believing them. This is the sort of thing it leads to:

For nearly three weeks Belgium's leading virologist has been living in a safe house with his wife and 12-year-old son, guarded by security agents.

While scientists across the world have come under attack throughout the pandemic, the threat to Prof Marc Van Ranst is more serious than most.

He has been targeted by a far-right soldier, Jürgen Conings, who has a vendetta for virologists and Covid lockdowns. The military shooting instructor is on the run with a rocket launcher and a machine gun, and Belgian police cannot find him. [BBC News]

While America is shutting down the access for the right-wing liers who feed on this sort of thing we have those who do not believe we should speak truth to power. We have members who would rather be entertained by their PM than have one whose ability to look at things forensically might have saved many lives - but would not have made them feel better and happy so he's no good is he. Oh no, we would rather have an absence of leadership than good leadership as poor leadership makes us "feel" better.

Our leadership includes a man who said that "tens of thousands" of people were receiving the vaccine in Bolton "every single day". They were not. When questioned the government said he misspoke - it should have been every week. As they said on More or Less that is the fine line between saying something true in Parliament and saying something untrue in Parliament. But the correction wasn't true either. It wasn't even tens of thousands a week. They were vaccinating a couple of thousand each day. In fact, Bolton - a place where the virus of concern is spreading - was receiving much the same a Walsall and Stockport, areas of similar size but without the concerns in Bolton. There is no evidence that the government has ramped up the vaccine to meet the concern but Matt Hancock did not tell us that. He told us figures that would make us feel this government was doing what needed to be done.

If governments can mislead on this scale it is no wonder that lies are spread on a simple forum like this. But isn't it the posters job to ensure they are telling the truth? We have long standing members who do not seem to believe that to be the case - just as long as the lies make them feel happy and 'winners'. They spend time haranguing something that didn't happen because their prejudice is being shown up for what it is.

I read something the other day, can’t remember which group it was but the word ‘mother’ will no longer be used and instead it will be ‘the person who gave birth’!!!! WHAT!! Now that is totally wrong for so many reasons, I think the world has gone mad, let’s get on with enjoying life. After all what’s in a name?

Earnshaw will not return, of course. His/her job is done. They have added lies to the minds of a few more of the foolish and gullible,

I’m not aware that the growing level of progressive social change and attitudes have a particular platform that claims to speak for the majority.

The mistake you made was assuming that I was talking about left wing politics.

There is a discussion to be had about identity politics and whether it serves the most vulnerable in our society well. I dont see how we can have this discussion with an op who starts threads and never returns. I suppose there is an arguement that we can just continue with the discussion but thses threads are just too bizarre.

I need to finish my first cup of tea before I start typing, that's my excuse for typos.

No, Beckett your not alone 😉

Sorry, but I find it rude not to return to the discussion especially ones that open with volatile statements. On this occasion we may be proved wrong, but it is happening too often. Do the OPs want to drive us to argument all the time?

And did you read my post ? The OP is incorrect.

What I find irritating is that there are a number of posters (admittedly a minority) that rather than debate in an open and intelligent way, simply resort to either name calling or behind the hand remarks.

I can’t understand why, if they don’t want to engage they bother at all.

Would you enclose this?

Why report so much ?

Javid and Sunak have both resigned their cabinet posts….

Dylon fan Is it worth the money?