This has just been posted locally. It’s content may be upsetting for some. But if it saves any dogs life, it’s worth it! 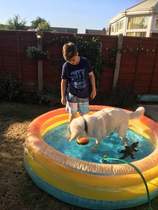 This is my daughters dog who spends most of his time lying on a cold tiled floor or in the pool.

When we lived in France the temps. were often up in the 30s, as they are at the moment.
We had a long-haired border collie and she knew to lie in the shade, sometimes on her back on the grass to cool her tum. And drink lots of water.
She liked to cool off in the pond too, but this time of the year the pond is usually dry. So I sometimes took them down to a nearby river for a dip.
But she was born and grew up in that climate. We and our pets aren't used to it.
ps "them" - we looked after a neighbour's spaniel cross, who loved the water. When he got old I once had to drag him out of a fast flowing stream when his legs weren't strong enough to swim.

Thank you for posting this GannyRowe. What a sad story! I consider myself to be a responsible dog owner, would never leave a dog in a car, even on a cold day. But I wasn´t quite aware of just how serious overheating can be. My dog hates it when it is this hot, he always heads for the shady side of the street when we´re out walking. He adores chasing a ball however and will do that even in the scorching sunshine, his tongue lolling, he keeps coming back for more. I always thought that as long as he was happy doing it, there wasn´t a problem. Surely, he´d know when to call it quits if it got too much for him. I´ll definitely be more careful in the future.

We went to our caravan site yesterday to empty van for a service this week and I left my dog at home. I was shocked at the amount of dogs that were being walked around the site in stupidly high temperatures in the middle of the day and owners stood around chatting too while dog was getting hotter and hotter and on tarmacced roads too so poor dogs pads must have been so hot.
Irresponsible dog owners at their worst.

Such a sad story. The last paragraph says it all.

We’re dog sitting today for friend, who didn’t want to take her on a long, but necessary days journey.
She’s been in the garden under the table shaded by the sun umbrella and is now on the cool stone floor.

What a heartbreaking tale - the dog's owners must be distraught. My own (black) dog has had his walks considerably shortened in the hot weather and every walk has included a dip in the river, but he has continued to chase his ball. I shall be even more careful from now on.

Several sad stories in the news about this issue, so easy to assume our dogs will stop when they are too hot. Why do people take their dogs out in cars in the heat, they would be much
happier and safer at home. It's 36 degrees here, my dogs are comfortable indoors as am I.

Like you, I thought my dog would just stop returning the ball if she was too tired! Though as she got older I am far more sensitive to the temps for her walks. But this story has really opened my eyes too!
Post and re post, maybe we can really get the message over if enough people did just that.

Don’t forget, it’s not just dogs getting left in cars! It’s idiots walking dogs no matter what, just because they always have, doesn’t mean they always should! A beloved dog won’t die if it misses a walk once in a while.

My little pug hasn't been out for 2 weeks. I learnt my lesson when I first got him, I took him out for his usual walk and thought I had killed him. I do have quite a large garden so he can get outside when he wants but, he is a bit dippy, he will sit in the blazing sun until I make him come in. I do worry about the heat, because he's a flat faced breed he really struggles

Yesterday, after a day filled with fun, fetch and swimming in Lake Windermere, Myself, Lucy & Tiggy had to say goodbye to our best friend Max.

He collapsed and was rushed to the nearest vets where he was diagnosed immediately with Water Intoxication and put on drips of sodium, potassium and mannitol to increase his electrolytes and relieve pressure on his brain.
After 7 hours of determination from the vets and nurses, Max was unable to pull through.

“Water Intoxication is a relatively rare but frequently fatal condition in dogs. At highest risk are dogs that enjoy playing in the water for long stretches.”

We are so unbelievably devastated that a simple game of fetch in the water, something we had done a hundred times before, resulted in such a perfect day turning into our worst nightmare.

Water Intoxication was something we knew nothing about. At this time of year, so much awareness is spread about not leaving dogs in hot cars but no one ever mentions the hazardous effects of your dog ingesting too much water whilst playing.

We have had to learn the hard way and all we can do now is spread awareness of this terrible condition in the hope that other dog owners are informed.

I googled it and yes, it’s a genuine condition that I’d never heard of, even though we’ve had dogs all our lives. 😢😢😢

It’s so sad to hear about these so loved animals, we are all guilty over looking what heat can do to out pets, even the fish in your fish tank can over heat in this weather. I have bottles of frozen water floating in my tank of tropical fish to bring the water temperature down,

As for our golden lab, she has just been for a gentle stroll round the block, a wash down with cool cloths, then she will sleep, as always, on the floor by my bed, with the ceiling fan on.

I’m lucky that I’m home all day, so she has access to the house and garden, she spent most of today crashed out in the shade on the patio, or stretched out in front of the fan in the living room.

But as I say, please don’t forget all the other pets, rabbits, cats, chickens, they all need extra care. 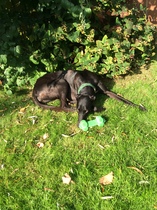 Hattie gives me the odd hard look during the day but I refuse to walk her until,it has cooled down. If I am at home she has the run of the garden as well as indoors and will lie on the grass until she gets too hot, then come in and cool down then go out again.
Some (human) people’s stupidity is verging on criminal.

Just back from walking my dogs at 7.30 this morning. Lovely cool breeze and kept to the wooded areas where possible. I’ve a small paddling pool in the garden that one of them loves to cool down in. 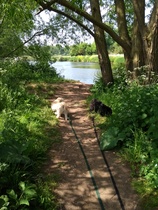 Reading....and rereading..... this story and the other sad ones recorded during this excessive heat, has truly broken my heart.
We have no dogs of our own nowadays sadly, but are great dog lovers and were hopefully considered pet owners through out our years.

However this main post has even opened our eyes, and it is so very heart breaking........... it needs to be copied in big red letters and perhaps pinned to every available area......especially where dog walking is prominent.
Anything and everything MUST be done to prevent such terrible............and needless.....suffering.

Thank you for these messages, they are heartbreaking but need to be repeated and repeated. We have two greyhounds, one is black and feels the heat terribly. They have a gentle stroll about 6.30am in our shady walk and then perhaps about 10pm if they ask. No regular walks at the moment and they really don't mind just want to keep cool and sleep. Another thing to be aware of is that pavements and paths hold the heat for a long time and can be very painful for paws. DH spoke gently to a lady last week who was walking two husky type dogs about mid day. He said they had very thick coats and were panting hard and she said she didn't think they minded too much but agreed it might be better to wait until later and took,them home. Take great care of your special friends.

Hattie look to be in lovely condition Maw with thar lovely shiny coat.

MawBroon - Hattie looks similar to a greyhound.
I'd forgotten to mention that when we were in France one of our sons was moving abroad and asked us to take on one of their rescue greyhounds. In 2003, the year of the canicule in France.
Which we did, but poor Twiglet suddenly dropped dead while running (as they love to do) during the hot summer.
Maybe the breed is more sensitive to hot weather.

Our dog hates the heat even though he has a short coat.

Although this thread was very upsetting, I'm glad I read it because I wasn't aware of the dangers of walking a dog in the heat. My dog doesn't play catch games any more but he does seem to get exhausted if we walk in the sun. In this weather, I will cut the walks down.

I also didn't know about water intoxication, so thank you for that information.

Eloethan - I wonder if dogs with short coats are more vulnerable as they have less protection.
Longhaired dogs might trap cooler air in their fur.

Fennel Thanks for the info. My granddaughter (who's 7) said that to me yesterday but I was sceptical. She's obviously got more sense than me!

Our 2spaniels get walked in the morning between 7.00 and 8.00, then I wait until about 8.30 in the evening when it has cooled down a bit. They don’t understand this, and still look expectantly at the normal walk time. There are wood, laminate and tile floors for them to lie on, plus a cool mat I bought last year, but that gets mainly ignored! They go in and out the garden at will.

Why is Johnson more popular than Starmer?

Can anyone explain this…