Can anyone explain to me this fixation with travelling to Mars with a view to man being able to live there? We have the most beautiful planet imaginable: why can’t we spend all that money just providing clean water for everyone on earth. I’m not against space exploration, the space station etc but why are we trying to find another planet to live on in case we destroy this one?

Thanks Blossoming. That was really interesting. I have always been fascinated by space exploration: my favourite tv programme from childhood being the pathfinders in space series, but it worries me these days that we’re just finding a planet to escape to when we ruin this one!

I have enough trouble summoning the energy to go to the shop.
No way, Mars.

Simply to prove they can, or “because it’s there”!.. The Moon was the same, they’ve been there several times, 50 yrs ago, all they found was green cheese.

Seriously, they tell us we learn a lot about the origins of the universe, you can’t relate that to the lives that any of us lead.

Some benefits of the many space exploration projects, just off the top of my head...
Laptops
GPS
Integrated circuits (i.e. The things that make possible whatever piece of tech you're reading this on)
Heat resistant material used in firefighters clothing
Light and usable breathing masks for firefighters
Cordless tools
Scratch resistant lenses
Smoke detectors

There's a lot more of course, so there's lots of benefits to our lives here on Earth. And that's apart from satisfying the human desire just to see what's round the next bend in the road. 😉

We could develop that without going to Mars though. I mean wars have meant the medical profession have found better ways of treating burns etc but it would still be better not having wars. I know I’m being negative by the way. Was often developed because of space exploration? (I’ll google it....)

Spoil one world to extinction move on and spoil another
Get this world sorted out first
I cannit get excited by space travel, I would get very excited by things being changed in the world we ve already got

I was just answering the question about how it related to the lives we lead today. It's not the reasons they go.

I just watched the pictures sent back by Perseverance from Mars. It's just amazing. Can you imagine if they do find signs of life there? Everything changes 👽 (I know they're not going to find little green men, before anyone tells me!)

It really upsets me that the guy from the Leicester space exploration centre died before they discovered that Beagle had landed on Mars but wasn’t transmitting.

The scientists do a pretty good job of convincing us how beneficial space travel is, in reality, we had computers, portable battery power, GPS was a US military system and fireproof clothing was used way before space travel.

The real change is communications, with satellites far more connections are possible, that’s a long way from traveling to Mars or the Moon.

DH and I went outside last night to look at Mars, which was clearly visible just above the moon, and marvel that a probe was about to land.
We had heard Professor Maggie's enthusiasm on The One Show and that had rubbed off on us.

I think that this is necessary because life on earth is becoming more untenable and humans will need an alternative sometime in the far future.

The US Military GPS system was based on knowledge gained from the early Sputnik launches from the USSR. I don't expect that the Russian scientists imagined that their satellite would one day help me find my way to the nearest Starbucks, but there you go.

That's just one example, there are others about ICs and so on that I'm not going to list here. We could have done these without space exploration, but we didn't.

But like I said, all these things are by-products. We go to space because the human race has always wanted to explore. Its a fallacy that we're going to Mars, or anywhere else, because we want to colonise it. At least until someone invents terraforming.... Perseverance has gone to Mars to investigate whether life ever existed there. I don't know what we'll do with that information when we get it, but someone does.

Going back to satellites... Einstein came up with the Theory of Relativity in 1905 and it had no application at the time. Guess what? Satellite navigation and GPS rely on knowledge of how relativity affects time. You never know.

I agree we need to get our act together with our own world.
It’s magnificent but we treat it with disrespect without consideration for the future generations.
The world is warning us of our abuses but we ignore it instead we look for other worlds to exploit. Everything we need to exist is on our planet what a wonderful thing the human race is not!

What happened to saving the planet and looking after the environment and cutting back on polution etc.

The great thing about humans - we can do more than one thing at once.....

Yes. We can talk about global warming and pollution while at the same time warming the planet and polluting it! I just despair at what we’re doing to this beautiful planet that we live on.

But there seems to be this antipathy to space exploration, especially as there are other things that need doing. But they don't have to be exclusive. By landing a probe on the surface of Mars, we don't have to ignore the work that needs to be done on earth. Its almost like there are only 12 scientists and engineers in the whole world and if they are focussing on Mars, well they can't be doing anything else! 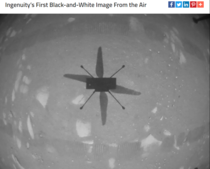 Less than 120 years after the Wright brothers' first powered flight, our first flight on another planet.

It wasn't that expensive was it? in the grand scale of things? The engineering that goes into these things is absolutely amazing 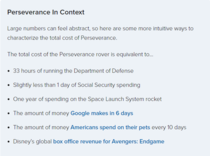 $2.7 billion. Sounds a lot at first, then found this. US figures, but still interesting.

The photo Alegrias posted shows the surface of Mars, taken from the camera fixed to the bottom of the helicopter/drone that went up with Perseverence and was let out on its first flight this lunchtime. The shape you can see is the shadow of the drone cast by the sun.

It is quite humbling to think that that is the same sun which casts our own shadows when we go outside.

The drone is called Ingenuity.

Perseverance and Ingenuity. How marvellous. 😍

I love the idea of it being let out on its own!

Do you have a strategy for one of “those” days? I