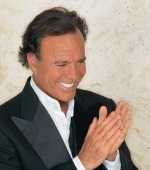 With sales of 300 million albums in 14 languages, Julio Iglesias, is the best-selling Latin artist in history. To celebrate the launch of his new album 1: The Collection he's going to be answering your questions on Gransnet.

Julio is a father and grandfather, and started out his adult life as a goalie for Real Madrid until a car crash stopped his football career. He turned his hand, rather successfully it turns out, to music. The rest is history.

Julio’s career has brought him Grammy awards, an appearance on The Golden Girls and a role as a Goodwill Ambassador for UNICEF. He’s also been presented with 2600 gold and platinum records, his star has been on the Hollywood Walk of Fame since 1985 and his name is entered twice in the Guinness Book of Records, for having sold more albums in different languages than any other artist and for being the biggest selling Latin artist in the world.

Julio’s new album comes out on May 19th and can be bought from Amazon.

Post your questions for Julio here by midday on April 29th.

Gosh I have seen Julio a couple of times in concert but not for years. My question is where has he been hiding and please can I come and serve tea or something when he visits GNHQ!

Julio, the heart throb of my youth. What is your favourite thing to do in the world (when you're not singing)?

Julio oh Julio What a catch for GN,I have had the pleasure of seeing Julio up close but not personal in Altea where he supported the Towns Arts Centre when I lived there,do you still get to go and visit Altea and manage to wander around the area and take in the fantastic atmosphere that the Town possesses.

Hello Julio I love your voice and had a huge crush on you when I was a girl,and now my own daughter loves your son Enrique I have also got a c d of his.My question is do you go and see him when he performs and have you ever got up and sung with him ? and thanks gransnet x

Hello Julio I am a huge fan. What do you think is the secret of your success? Obviously you are very talented but if you had been plain and pasty do you think it would have been quite the same?

I've got happy memories of being in Majorca and hearing your lovely voice everywhere, especially in a little beach cafe which we spent a lot of time in.
It was before I had really heard of you in the UK, but not long after getting home, suddenly your voice was everywhere and you became massively popular here. I still think your voice is wonderful.

Hello Julio, another huge fan here, both of you and your son Enrique.

Could you please tell us a little about your family? I know that you have children ranging in age from early 40s to under 10, and that you also have very young half-siblings. How old are your grandchildren, how do all the younger family members get on, and do you ever manage to get all the family together? Thank you for your time.

Hi Julio, what do you do nowadays? I read that you obtained a law degree... have you put it to use?

Am I too late?

You've previously claimed to have over 3,000 notches on your bedpost... is this true? How do you keep score?

Do you think you will ever retire?

Don't worry bonsai and penutbutter - as our site was down, we're going to keep this up until the end of the day. So post away!

My question follows on from Bonsai's... are the rumours really true? If so how did you find the time?! And if not - how many people were you singing about in To All The Girls I've Loved Before?

Hello Julio I am another big fan. I always picture you as a young (or youngish) man. Are you under pressure to spend a lot of time on your looks in order to keep the Latin god image going? I can't imagine you going grey like the rest of us. Or even bald!

I read somewhere that you have released 80 albums. Where on earth do you find your inspiration to write so many songs?

Thank you for many years of entertainment from another big fan

Yet another huge fan here and can't quite believe I can actually ask you a question!

Do you think you would have been as successful if you were an average looking bloke from Britain) rather than a tanned Latin god with an accent that makes women (well, me) swoon?

Hello Julio, I've always been curious about the effects of singing in different languages.

So, how many languages do you speak? Do you think recording songs in languages other than your native Spanish has helped a lot in terms of your success elsewhere?

Julio, to what extent do you think a successful career can be manufactured?

I'm referring to shows like the X Factor and American Idol (don't know if you're aware of them but they're talent shows that result in recording contracts etc for the winners). Do you think they are a good route to success?

Hello! I believe you once said you were part Jewish (or have I got that wrong?!) Is it a faith you practice at all?

Hi Julio. I have a question: did you enjoy being in the Eurovision song contest (1970 - I remember it as if it was yesterday) and were you upset about being beaten by Dana?

Hi Julio your songs remind me of some of my best holidays in Spain when they were played everywhere. My question is do you ever regret that your football career was cut short?

Hello Julio! Do you still tour? I would love to see you in concert. Has being on the road got harder as you have got older?

Gosh I have seen Julio a couple of times in concert but not for years. My question is where has he been hiding and please can I come and serve tea or something when he visits GNHQ!

Hi! I've had the privilege to tour the five continents in the past years. It's just that I haven't had the chance to return to the UK until now. I am looking forward to the two upcoming concerts at the Royal Albert Hall, on May 13th and 19th, and to have a hot cup of English tea!

Julio, the heart throb of my youth. What is your favourite thing to do in the world (when you're not singing)?

You know, singing is my life, so there is nothing else in the world I enjoy more.

The Lockdown Gang - on parole!

Trying to decide to downsize nearer to family,

Should there be a driving test and a cut off age?