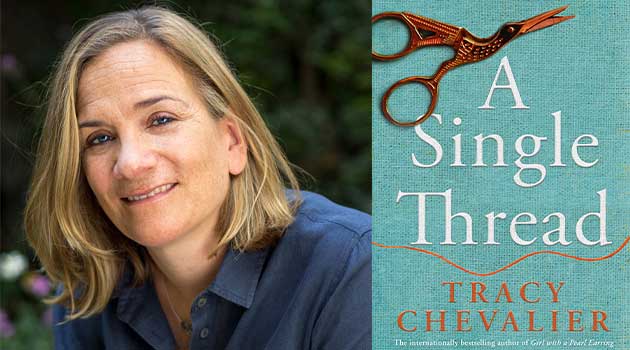 Tracy Chevalier is the author of 10 novels including At the Edge of the Orchard, Remarkable Creatures and Girl with a Pearl Earring, an international bestseller that has sold over five million copies. Tracy's latest novel, A Single Thread, is her first novel set in Britain since Remarkable Creatures, which is currently being made into a feature film.

It is 1932 and the losses of the First World War are still keenly felt. Violet Speedwell, mourning for both her fiancé and her brother and regarded by society as a 'surplus woman', unlikely to marry, resolves to escape her suffocating mother and strike out alone.

A new life awaits her in Winchester. Yes, it is one of draughty boarding houses and side-long glances at her naked ring finger from younger colleagues; but it is also a life gleaming with independence and opportunity. Violet falls in with the broaders, a disparate group of women, charged with embroidering kneelers for the Cathedral, and is soon entwined in their lives and secrets. As the almost unthinkable threat of a second Great War appears on the horizon, Violet collects a few secrets of her own that could change everything.

All our copies of A Single Thread have now been allocated.

Finding unexpected things out about friends.