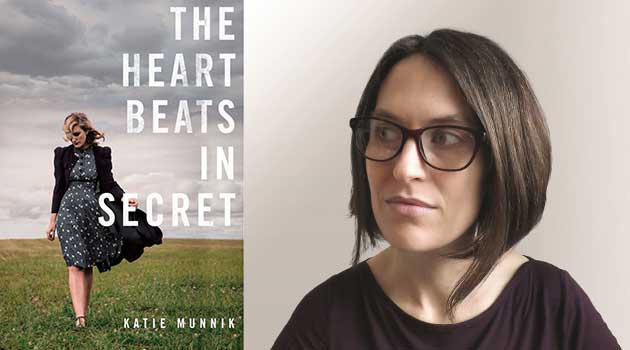 From debut novelist, Katie Munnik, comes the story of three generations of women as they deal with war, emigration and family secrets. The Heart Beats in Secret is our April book club pick.

In a small rented house on the east coast of Scotland, a cold winter drags on and Jane faces motherhood alone. But with her husband away at war, she fears small town suspicions. She keeps secrets. Who will they protect and who will they hurt? In times of war and separation, so much is left unsaid.

Jane’s daughter chooses to emigrate to Montreal, leaving behind uncomfortable questions about her background and discovering a new political world of social unrest and undreamt-of freedoms. She settles in a commune in rural Quebec, where her own child is born just as the Apollo Mission lands on the moon.

Inheriting her grandmother’s house is a surprise. As is the wild goose who stalks into the kitchen and makes herself at home. But somewhere between the flying feathers and her own gathered confusions, Pidge pieces together fragments of her family’s history, finding surprising answers amongst the stories – and the silences – of the past.

Set between Scotland and Canada, The Heart Beats in Secret explores the wilderness of the heart, the secrets concealed with every beat, and the strength of maternal desire.

Katie Munnik is a Canadian writer living in Cardiff. Her collection of short fiction, The Pieces We Keep was published by Wild Goose Publications and her prose, poetry, and creative non-fiction have appeared in several magazines and anthologies, including The Cardiff Review, The Dangerous Women Project, Echoes of the City, and Geez Magazine.

The Heart Beats in Secret is published by The Borough Press and is available online and from all good booksellers. If you do receive a free copy, we'll need you to add your questions and comments for Katie to this thread by the end of April.