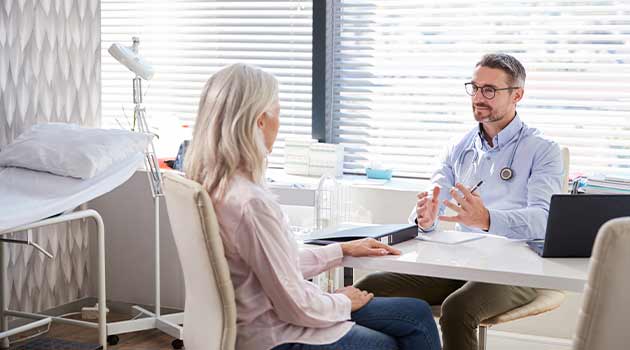 A survey of over 1,500 women by Mumsnet and Gransnet shows that many women are struggling to get appropriate help from GPs for perimenopause and menopause symptoms, and suggests that some GPs are at a loss when it comes to perimenopausal symptoms in particular.

Get health advice delivered straight to your inbox...

Struggle to be taken seriously

"I feel like I'm going insane, but do not feel that it's even worth another GP visit to try to sort it out."

"The GP said there was no way to know if it was peri-menopause and that I just had been to get on with it, they can help when my periods stop/menopause starts."

Join a community of over 300,000 on Gransnet today

"My (female) GP looked at me blankly when I mentioned perimenopause. She doesn't appear to have heard of it. She tried to fob everything off as anxiety."

"My GP is very unhelpful and I think most GPs aren't clued up on HRT, even more so re the risks for people with family history of breast cancer. So I feel like when I'm the most vulnerable I need to take my own health care in hand very carefully as I won't get any help from my own healthcare provider."

Only around a half (51%) of those who are going through or have gone through the menopause approached their GP for help in managing the symptoms.

"It’s impossible to get an appointment in reasonable time, and I don't want to waste precious GP time."

25% of those who are going through or have gone through perimenopause and who have approached their GP for help reported being told that they couldn’t be perimenopausal because they were ‘too young’.

"My GP flatly refused to believe that I was menopausal for 3 years because she said that I was "too young" (I was 37). I had to struggle on with a full time job and family commitments, with no help for the awful symptoms. It was a horribly difficult time."

10% of those who are going through or have gone through the menopause said they had sought private healthcare because their GP did not help with their perimenopausal symptoms.

How can this problem be solved?

Mumsnet and Gransnet are calling for GPs to be given more training in menopause and perimenopause management, and for women to be given clear, well-informed advice on treatment options.

Mumsnet and Gransnet Founder Justine Roberts said: "Great strides have been made recently when it comes to the visibility of the menopause, with employers being urged to recognise its impact on many women’s lives, and women becoming increasingly clued-up about associated symptoms. The next step is for perimenopausal symptoms to be more widely acknowledged. GPs are a crucial link in this chain, and our survey findings suggest that GPs urgently need to receive adequate training to recognise and manage women's symptoms.”

Dr Louise Newson, GP and menopause specialist said: "Menopause education has been inadequate in the past as many GPs (including me) have received no formal menopause education as part of their training. Traditionally menopause care has been lead by gynaecologists. However, all healthcare professionals need to receive adequate training in the perimenopause and menopause so women receive evidence based and holistic care. Along with like-minded GPs I have developed a Menopause Education Programme which will launch soon and will really help to improve education for GPs, nurses and other healthcare professionals. GPs are very busy so need education that is evidence based and easy to access, so we are really excited that our programme will really make a difference to so many women."

Dr Mark Coombe, GP and education director at FourteenFish said: "I am very sorry to see the results of this survey as HRT and the menopause are a massive health care issue and GPs are key in delivering a world class service for this important group of the population. There are two main keys to solving the current problem. The first is education that is easily accessible, evidence based, constantly updated and interactive. Secondly GPs have had very strong guidance by one of our leading bodies the (MHRA) Medicines and Healthcare products Regulatory Agency who in August stated:
'New data have confirmed that the risk of breast cancer is increased during use of all types of HRT, except vaginal estrogens, and have also shown that an excess risk of breast cancer persists for longer after stopping HRT than previously thought. Prescribers of HRT should discuss the updated total risk with women using HRT at their next routine appointment.'
"In fact this was based on a review of old flawed data but resulted in GPs thinking they should not prescribe HRT at all. So we need better guidance from our leaders."

Is anyone else cleaning their shopping?

Does anyone know this flower