Help us: Allow children to see their grandparents 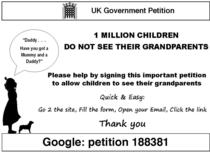 I need your help to get signatures to sign our petition.

Has anyone got any good contacts please, to raise awareness and elevate this petition?

How are these things decided now?
I know a family where the DIL would not let the GPs see the child and they went to court - and despite the mother being obstructive by not turning up they stuck with it and attended every hearing date. The judge found in their favour and they see the child every month - the mother has not tried to stop this. They just need to ensure that the father has no access to the child and the judge believed that they would keep to this stipulatio - which they have. So far going well.

It's unfair in this case to accuse the mother of being obstructive, if the father has been banned from having contact with the child the mother is right to be concerned that it would be very difficult practically and emotionally for the paternal grandparents to keep their son away from his child.

Parents are only legally stopped from having any contact with their own child if there are concerns over the child's safety.

As for being obstructive maybe she had issues being a single parent and has she has not stopped the contact. it sounds like she just wants the legal support in place to ensure her child's safety

Not all Grandparents are whiter than white ........ just saying

She actually had no reason at that time to be obstructive as he was not banned!

The fact he was not permitted to see the child came at the same time as the decision to allow the grandparents to see her!!
She was being very spiteful to people who had treated both her and the child well while she lived with them and she had received all sorts of assistance - not just financial!
She is very happy with the arrangement now and has apologised for her behaviour. The grandparents have been forgiving and once again giving assistance but of course will never totally trust her again.

I agree with you aggie and I would never say anyone was totally without fault, but they really did not deserve to be prevented from seeing a child they adored.

There must have been a back story to the banning, which could have been building up for years before the GPs, or you, knew anything about it.
That would have affected the mother's attitude.

It only took the fact that D couldn't afford to pay the agreed maintenance (unemployed) to prevent her from seeing the children and therefore we are prevented too as she might get to see them when they are with us.

You didn't ask, AnnieSuzie, but I see a major problem in this petition - it doesn't exclude GPs who are or have been physically, sexually, or emotionally abusive or who have exposed their gc to others who are guilty of these things.

It seems obvious, Welshwife, that in your friends' case the mum was concerned about the dad having access. And it appears she was right about him. Maybe she handled it badly, but she was probably desperate. Just a guess, of course, idk for sure. But I would be "obstructive," too, if I thought it would protect my child.

Ninathenana, that's so sad. I didn't think judges equated payment with being able to see the children though. That sounds like the dad's idea - she could probably fight it in court.

But I understand not letting the GPs have the kids if there is a possibility that they will include the parent who has been cut out. It's hurtful to the GPs, and that's unfortunate, but I can see why the custodial parent might do that. Just a very sad situation all around.

I agree, there is much more than appears on the surface FarNorth. Like you say "There must have been a back story" there are always many sides.

It must be very hard to be denied access to your grandchildren by spiteful parents but grandparents don't have an automatic right and I think it should stay that way. There are ways already for grandparents to apply for access through the courts, although I appreciate that this costs money.

Is the petition asking for automatic rights?

As had been said we don't know the backstories - families become estranged for many reasons, sometimes understandable ones, e.g. the daughter of an old school friend married a crook, my friend and her DH knew he was no good (had far too much money to have been legally earned and didn't attend the wedding). He ended up in prison and his parents (also very dodgy) fought for access and won I think a visit a month, or something. They were persistently unreliable, not turning up, turning up a day early, etc, and it caused a lot of problems for all concerned, particularly the child who was about four at the time.

Nina your daughter's situation sounds terrible - how can she be denied access because of non-payment of maintenance, is this a court ruling?

No, it's not been to court. D can't afford to take him to court.
It is purely the father's decision. The children live with him but that hasn't been to court either.

Aggie: I do appreciate what you are implying

Welshwife: Good luck for the future

Starlady: OMG, I'm in total shock - no of course it wouldn't include anyone who is physically or mentally abusing, the Court would be sure to rule these horrid people away from all children.

I truly do wish everyone all the luck in the world, to be able to see their grandchildren.

Thank you for your support

Each to their own, but this is bad idea, in my opinion.

Case by case, in court, is far clearer.

AnnieSuzie OMG, I'm in total shock - no of course it wouldn't include anyone who is physically or mentally abusing, the Court would be sure to rule these horrid people away from all children.

What you are saying seems to be that the burden of proof should be with the parents/court to prove that grandparents were physically or mentally abusing before access to grandchildren could be denied.

At the moment the burden of proof lies with the grandparents to prove that they are not monsters.

I am not sure that what you are advocating is actually a step in the right direction. There must be many adult children who suffered at the hands of their parents (now grandparents) and don't wish their own children to suffer in the same way, but in most cases they have never gone to court or even been involved with social services.
Why should they go through the expense and distress of court proceedings many years later, to protect their own children?

No, I don't think I will be signing this petition.

It's a no from me too

I have just read the petition and absolutely nothing would persuade me to sign such an all or nothing petition on anything.

It simply says 'Allow children to see their grandparents', or should it be 'Let Grandparents see their children'?

Oh, except surely those nice kind judges would never let nasty grandparents see their grandchildren. Are you sure?
What about parents who walked out of their children's lives and disappeared when they were tiny; but then turn up 30 years or more later demanding to see grandchildren ?(possibly because the deserted are now grown up, rich and famous?)

As the petition stands grandparents who, for whatever reason, do NOT wish to see their grandchildren, could be forced to do so. Children could insist parents arrange access when the parents have good reason to not want to.

I'm just trying to bring UK into alignment with France and many other countries.

I'm pretty certain that 90% of grandparents are genuine caring heartbroken people who are aching to see their grandchildren.

Really? Can I ask where the evidence is for that statistic. Or is it just your opinion?

I suppose I'm smarting from a nasty and untrue attack on another forum allied to this. I now feel for definite that there should be no automatic right to have access to grandchildren. Parents should be the most important people in a child's life and their judgement should be respected.

Seeing things through a camera only

ALPHABETICAL TV programmes, past and present

How fast are you? Do slow people irritate you?