Are you irritated by incorrect grammar.

I am all for regional accents, even though some can be mildly irritating.
However what really annoys me is blatantly incorrect grammar. On the news this morning I heard a senior politician using the phrases “you was” and “we was”. Unfortunately my brain automatically reduces my perception of the speaker’s IQ by about 20 points.
Am I alone in this, or are there any other glaring errors which really irritate you?

It does irritate me, however, I would never consider calling anyone out for using incorrect grammar.
As for commenting on a person's IQ, I find that unacceptable.

Exactly this. Ditto for poor spelling too. 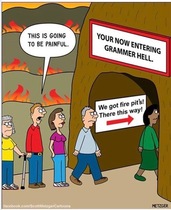 Know what you mean - but there are worse things to worry about with our politicians!

Misuse of ‘myself’ gets me going too. I find once I’ve heard the bad grammar I switch off from what’s being said.

Spot on as always maw!

I would never dream of correcting anyone's grammar or spelling - mine's not so hot.

But there is one phrase / sentence that really does grind my gears and I have to sit on my hands if it's in print, or zip my mouth if it's verbal. Those who write or say "end of" after they've made a forceful observation. I find it intolerable. Maybe it's more the attitude behind the 'sentence' rather than its grammar.

And another of that ilk that you see on here: ‘do keep up’

I’m listening to an audiobook, the reader keeps saying ‘calmuny ’ instead of calumny and it’s really annoying.

No, I am interested in what is being said not how

Same
Also misuse of grammar is often linked to regional accents. My extremely intelligent 6 year old grandchild has a wide vocabulary. I often find myself saying yes x, we were doing xyz. He mixes were and was

Malorie Blackman was interviewed on Radio 4 yesterday and said ‘less’ when she should have said ‘fewer’.

I find it difficult to judge people for making grammatical errors in speech, as I find talking more problematic than writing if that makes sense. And if you are being interviewed/ recorded I would find it doubly stressful.
And there’s no edit button is there?

So yes, it’s irritating, but I don’t do the IQ thing.
I have spent my entire life being thought of as a bit thick due to my accent, so I’m more forgiving of others

I'm with you on this one Fanny. I have had the same all my life with my original accent which I seem to be using more and more.
My DH from the same area but a different school used to mark my spelling and grammatical errors when we wrote to each other as students. He now realises it is not a sign of I.Q. I can beat him hands-down at most general knowledge quizzes and University Challenge non-scientific questions. I help with his crosswords but more in a knowledge-based. way,put the words in front of me and I am finished.
I have never joined in games of scrabble and had a friend who was constantly correcting me until I spoke in the elocuted voice I had been taught at school before leaving for further education.
Though I would admit the newsreaders sometimes get to me and even I can see their glaring errors.

It drives me mad. I have heard people on TV during interviews saying 'How was you feeling at the time?' and such like. I was dragged up in a not too great area of Birmingham but I can speak properly I hope. Our granddaughter has a T shirt with 'I am silently correcting your grammar' on it.

Yes, but that's probably because I've spent the best part of my working life correcting (or rather, editing) other people's work. Nowadays though, I tend just to let most things wash over me - you never know why a person may have bad writing or grammar. They could be dyslexic, for example. If the main thrust of what they are trying to say is reasonably clear, I just don't let it bother me any more.

She was “stood standing “ 😱

Should of and could of really irritate me, there are many others, most of the time I keep quiet! Double negatives too!!!

I get more irritated by people "gifting" and things like that.
As far as I'm concerned, that's a deliberate affectation.

I wince inwardly at all these instances quoted, but I would not correct someone I was with. I do think broadcasters and others whose job it is to speak publicly , eg politicians, should aim to use language correctly.
The only one I forgive is Jay Blades.

The double use of off/ of---get off of there. What's that about ?

Yes, I agree with the OP, such sloppy speech really annoys me and detracts from what the speaker is saying.
'You was, they was and them things' are such basic errors which would, or possibly should, have been corrected at primary school.
Letting pupils speak and write in this way does them no favours at all.

Misuse of ‘myself’ gets me going too. I find once I’ve heard the bad grammar I switch off from what’s being said.

Oh yes. Along with ‘would of’, the misuse of ‘myself’ is currently top of my list of irritations. Today in a local FB page I read a post which began ‘Myself, Sam and Jo will be …….’ 🤬. No doubt another irritation will soon top the list

Starting a sentence with the word "so" drives me mad. It seems to be very common with the under 30's.
"So here did you go yesterday?"
"So I went to the cinema with my sister"
Aaargh!!

Sorry, I should have said ‘So I’m easily irritated’. On second thoughts make that ‘should of said’.

A new one I've noticed is worse. It's the worse thing I've seen, this is the worse pain etc. I think some people must never read and see words written down.
Another I hate is would of instead of would have. Also common now is confusion between of and off .

Having to speak in public a lot due to my work, I regularly made a tape recording of what I intended to say and listen carefully for grammatical slips or the more irritating "Errh" " Uum" or other sounds that indicate I was thinking.

I also used quite often to ask family or colleagues to listen to the lecture I was holding and comment afterwards on comprehensibility, slips etc.

I find it intensely irritating listening to people say things like "at this moment in time" Mentally I hear my English teacher from senior school saying, "You mean: NOW" or using other catch phrases, so I try not to annoy others by doing the same.

She was “stood standing “ 😱

My friend Brian 'Come in chuck. Was you stood standing there fer long luv. T'was proper parky like, hope you was you wasn't frit in t'dark. Come in and have a cuppa with our Georgia.''

So what? loved him, miss him.

Know what you mean - but there are worse things to worry about with our politicians!

I know what you mean about the politicians, but your picture made my day. Thank you!

Have you got a favourite poem?

ALL YOUR DATA HAS BEEN HACKED AND COPIED TO MY SERVERS

Diary of a benefit claimant.

Children identifying as non binary can lead to tricky situations