Hurrah for my early Christmas present!

Because of painful hands - some sort of arthritis for which I'm being referred to a rheumatologist - I've been unable to knit for some time now. I've really been missing being able to create lovely warm sweaters and cardigans for my grandchildren......but guess what?!!! My lovely DH has bought me a knitting machine for Christmas! It's only a very basic one, but that's fine, because it's what I'm used to - I bought a Knitmaster machine when I was 17 and used it right up until DS and DD were in their late teens. Then when we were having a sort out it got put in the garage and somehow stayed there. On investigation years later it was, inevitably, rusty

So now I can knit again! OK, it doesn't quite take the place of being able to sit knitting while watching TV, but at least I can make knitted garments again, so I'm very happy

What a smashing, thoughtful gift Indiana. I hope you enjoy it.

Pleased you can do something you love. Well done Mr I.

That's great indinana. Hope you can still sew? Arthur is a damn nuisance😡 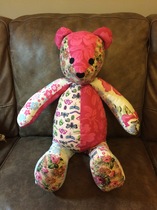 Sewing isn't such a problem, except the parts I have to do by hand. I've just finished making a memory bear for my GD out of leftover scraps from clothes I've made her. Each section - body/head, arms and legs - had a 4" opening for stuffing, so I had five sections to hand sew at the end

That was quite trying! Here is Bessie Bear - she stands 22" tall:

I love the bear indinana, what a lovely gift!

I think Bessie's gorgeous, something for little Dgd to treasure. Lovely fabrics.

Thanks Lona - she absolutely adores it. When I popped in today, there was Bessie sitting on my GD's rocking horse, while she rocked it for her

That is a lovely, thoughtful gift and I think a basic Knitmaster is best. Many years ago my MIL had a fairly basic Knitmaster and made lots of garments; she enjoyed it so much that she bought a more complicated Swiss machine but never got on with it and handed it on to me - I could never fathom it!

I hope you enjoy your present and do lots of knitting.
(And I'm sure that all machines have improved since my MIL's knitting days).

Has Knitmaster been taken over?
I didn't realise.

I'm not sure what became of Knitmaster, but I suspect they were taken over by Brother or Silver Reid. The machine I now have is a Silver Reid mid-gauge, i.e. it knits with DK and chunky yarns as opposed to the 4ply that I used with my old standard gauge Knitmaster.

I used several knitting machines but when my children were teenagers they wanted to buy black/grey sweaters from chain stores -home made patterned and fair isle a definite no-no!
I sold all my knitting machines and magazines over 30 years ago but kept the Knitmaster Chunky which is stashed away in the loft

I am still handknitting for the DGC but notice they tend to run around in a t shirt and never feel the cold - am I wasting my time?

I shall keep on knitting and sewing for my GD until she no longers wants any Nana-makes. Then I'll just knit for myself - won't bother sewing for myself, but will still sew craft type things, quilts, bags and so on. If I can.
At least having a knitting machine means I can knit jumpers in the colours I want and not be at the mercy of the latest fashion shades.

I stopped knitting for my GS when he was about six, when he refused to wear anything knitted, bought or otherwise. Even I the coldest weather DD struggles to get him into a warm top. I do miss knitting for him.

I loved my knitting machine. It's a great hobby and you can make the most beautiful things. I knitted a christening robe in a lace design and it looked really special.

I think I've just got the hint from DGD as she shivered the other day - rather cold than wear the new handknit (little one was warm and snug in hers).
They are trendy styles - apparently - but what do I do now with a nearly finished what-I-thought-was-trendy jumper - the yarn cost quite a bit?
[sigh]

I don't like knitting larger things btw otherwise I'd rip it all out and make myself something (not enough yarn either).

I love your bear Indinana - and what a great idea. Good luck with your new Christmas present - are you allowed to use it before the day though?

DH is busy using his Christmas present already which he bought himself (I must remember to give him the money for it!)

Now I'll have to think of a little surprise present or two for Christmas Day.

Indinana Do let me know how you get on. Be honest now how easy are they to learn to use? My arms and thumbs now start hurting when I knit. It might just work for me. A chunky knit machine would suit me. Off to Google such things.

I saw a machine being demonstrated at the local yarn shop which stitches up the knitted pieces!

indinana I am a hopeless knitter
And unfortunately not very good with my hands regarding any type of crafting.
I was wondering if there Is a knack to a knitting machine.
Would it be suitable for an all fingers and thumbs gran such as moi?

Your little bear is so lovely,
it would be lovely to make keepsakes for my 3 DGS
I have 2 crochet blankets to pass on to my GS that were made by my grandmother, so their Great great grandmother.
Also my DD used pram blankets that my mother had knitted for my children's pram
My DS has paintings by his great grandfather.

I would love to have something personal to pass on.

Mr indi pulled a cracker out the bag