Old Pennies - what to do with them?

I inherited a lovely coin and stamp collection. There are loads of 'old' pennies and halfpenny coins. Do you know of any where I could donate some or all of them? I did give some war dates ones to the local school recently, but I do have a lot and would love them to go somewhere useful. Any suggestions please.

Do you think it would be helpful to have a valuation done first ?

I agree with Cherrytree.

You could make a comprehensive list of what you have & research online. Are there local coin & stamp collectors groups that meet near you - they might help.
If you just want to get rid of them, I believe I'm right in thinking that Oxfam accept coin & stamp collections.

I gave a big tinful of old pennies( many dating back to the 1850's) to my eldest DGS to keep.I don't think they have much value as there are so many of them around.
Have your stamp collection valued though!

Check that you haven't got a 1933 before you give them away 😊! I think there are sites on line that give lists of the values. They do have some residual value to people who make jewellery out of coins, so always in demand.

At a recent craft fair, a woodturner was displaying items which had polished up coins - pennies, ha'pennies & farthings - inserted into them & he was making a tidy profit selling them as "the year you were born..." gifts!

There's another possible outlet for you Kateykrunch - or an idea for a new hobby!

Kateykrunch, we had/have, not sure if it is still on going, an appeal from Royal Berks Hospital, a couple of years ago, where they supplied envelopes and any coins, whether they were foreign currency, or sterling, could be donated . These were collected and sent to Bank of England ( I think) and the resulting cash was used to fund a Robbie the Robot type thing at the hospital. Sorry to be so vague, but it was a while ago, and our Charity shop also donated loads of foreign money. We did get a letter telling us how much had been raised, and I thought it was an excellent idea for using up all the odds and ends of defunct coins and notes from pre Euro countries, and pre decimal coinage.

Check to see if any of the pennies dated 1918 or 1919 have any letters printed on the left of the date, either a KN or an H. This means they were made at the mints at King's Norton or Heaton. And collectors still look for them.

Sorry, I think the initials are also on some 1912 pennies. 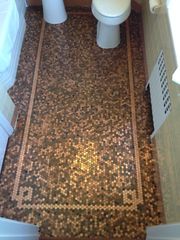 You could try this!

and sell them. Now, does anyone here have a birthdate round about 1850?

Am liking that loo floor Yogagran 👍🏻

Yogagran that floor is beautiful - how are the coins stuck down please.

If they're not of particular value I saw in a magazine that someone had laid out pennies on the floor and sealed them onto the surface for something different! Not sure I'd have the patience

It's not my floor nanevon but there are various YouTube videos of how to do it!

The Crich tramways museum uses them for their rides, if they are not valuable I'm sure they would love to have them. Make sure that they are not worth anything first though xx

As a mixed media artist, these could be very useful, if you want to donate any to me, I am always on the look out for any bits and bobs, nuts, bolt, watch parts, wheels and cogs.............

Dressmakers used to use them to weigh down hems.

Some interesting ideas, thank you, may take up thr 'hobby' suggestion, but, does anyone know how to clean up old pennies to get that sparkle?? (If anyone actually wants a few, if you private message, I'll try to get some to you).

Actually TriciaF you have reminded me, when curtain making in the past, I used them to help ( sewn into the hems) the curtains hang well and stay put.

I accidentally dropped a 2p piece into some pepsi and it was amazing how clean it became hate to think what it does to our stomachs haven't drunk any since, lol.

Yes, it's a kind of 'stripper' isn't it, and you can clean loos with the stuff.

I used to collect bun pennies when I went on the bus to university. This was in the 60s and there were plenty of Queen Victoria pennies around.i gave my collection to Beamish Museum when they opened a bank. I always take the DGC to see them when the visit.

Ask a Question to the Person Below: 🧵 6️⃣