We have an 8 x 12 conservatory. It was built at the start of the conservatory fashion and so is only single glazed down to the floor. We used to use it a lot in the autumn and spring but it has fallen into disuse, mainly I think because the adjustable Venetian roof blinds became brittle, and were removed and we find the glare just too much now. So, it has become a dumping ground. Currently it houses random surplus furniture, two bikes the DGC have grown out of and their two new ones. ( Why I don’t know because these should be in DD’s garage). Several boxes of charity donations which we have not taken at the moment as conserving petrol and nearest is 10 miles away. You get the picture. I hate looking out from my dining room area onto this mess.
DH and I cannot agree on what to do with it.
He wants a proper garden room replacement. We have had the plans drawn but building costs are rising and it would use up a good chunk of our savings so I am not keen. Have asked builder for a costed Quixote after he gave rough estimate but he has not come back to us.
I would either like it demolished or try to clean it up and get replacement roof and side blinds to restore it to its previous level. DH feels this is a waste of money. Also I think it does keep the lounge diner warmer in winter.
What would you do? Anyone been in a similar position?
Thank you.

Years ago I had the conservatory removed. Natural light flooded what had always been a dark dining room. A new patio was laid and it was a pleasure to step out of the French doors and enjoy the garden. Never regretted removing the conservatory. 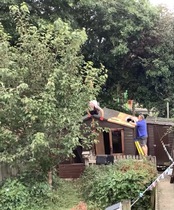 I have just converted my 16-year-old Shed, which was not very good condition into a nice garden room, it cost me about £3000 with the new roof cost in £700 it is 10‘ x 10‘ and it was used as a dumping ground, it started off as an extra bedroom for my son I had the electric put in it and it was dry lined insulated et cetera, then used as a gym, (that didn’t last long,)and finally the dumping ground now I am delighted with the result…

Blimey! With facilities you could sell it for about £l00.000. Well done.

A proper garden room would be lovely all year round, would keep the house warmer and add value. Repairing the old conservatory is probably not a good idea.

If you remove it, do you have efficient double glazing on the lounge diner?

Another alternative , my sister had a very up market looking metal and glass lean to type canopy added across her patio. They have table and chairs out all year, and a heater, they often sit out there even when it's raining. Not as good as a proper room but it is used a lot. 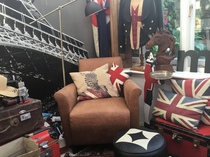 Last year we faced the same dilemma as you - our small conservatory was 25 years old, had become a dumping ground and was needing a major facelift as so much of the wood was rotten - alternative was we demolished it.. We worked out it was worth saving (replacement would of cost a fortune) - we found a joiner who replaced the french doors, saved/replaced window frames, made new finials - and had it repainted - l then had great fun redoing the interior and am so pleased with it. Its not to everyone’s taste and its cost a couple of thousand to make good but will last us out - as opposed to about 25k - so a no brainier.

Thanks so far for replies. Seems as divided as our household. To make it clear, conservatory is aluminium type. I meant roof blinds not a replacement roof. I realise what I wrote was ambiguous.

We do have double glazed patio doors on the lounge diner.

Loving both your rooms Shinmae and Birdie.

I also had double glazed windows and French doors to the dining room, which was always warm.

If you don't use it as a conservatory at the moment, maybe you don't need one? If you could do with the extra room, then a garden Room which you can use all year sounds better than trying to repair an existing old one.

If it is still structurally sound and not any serious leaking going on I would just "pimp it up" a bit. First get rid of all the clutter, then give it thorough clean and see what you are left with. Maybe new roof blinds, a paint job, some new flooring, a nice rug. It shouldn't break the bank.

You can then use the room as a nice place to relax for most of the year, except maybe in the depths of winter. But even then you might be surprised. What is its orientation. How much sun does it get in winter.

My mum and dad had something similar. It faced west so on a sunny winters afternoon it was nice and warm, even in January and February. Passive solar gain. Obviously very cold when the sun went down but it was surprising just how often they did use it.

Mum would sit knitting, dad would be reading, the cat on his knee. We often had afternoon tea in there. It looked out over open fields and as I said it faced west. We used to see some spectacular sunsets over the fields.

Ps. If roof blinds are prohibitive you could rig up a canvas sail to cut out the worst of the glare. Have a look on somewhere like Pinterest for ideas.

My previous house had a crumbling conservatory on a soft-wood frame. I decided to use the same footprint and have a new structure with full double glazing on a low brick wall. I had heating installed. The original sliding door from the dining room was retained. It was well worthwhile - the cats loved it! Twenty years after moving to downsize, I still miss it.

I think what annodomini suggests may be best for you, and definitely think about heating in there so you can use it all the time.

We had a tiled roof put on ours a couple of years ago. It made a positive difference. I would have liked to replace the French windows into it with bifolding doors but the cost was prohibitive. I open the doors instead

Going against the grain here. We had a similar old single glazed conservatory of a similar size and not much use, when we bought our last house.
Neither use nor ornament, although it did have heating.
We knocked it down and had a full height, double glazed bay window with French doors to the garden put in the dining room. This was a beautiful feature to the house, gave extra room and light.
Although, it did cost a fair bit, it was nowhere near as much as a larger conservatory. The remaining outside footprint became a pairing.

A garden room with solid roof will make the dining room very dark. I would tape black sacks to the existing glass to visualise the impact it would have. (I’d also black out where any brick walls would be).
We have decided to enjoy our savings
from now on so in your shoes, I’d be looking for a replacement structure. Maybe even a glass veranda.

I wouldn’t be without our conservatory. We use it all year round. DH. Spends most of his evenings in there, as we like different Tv programmes. We have a radiator which tbh , isn’t effective but the small convector heater warms it up nicely.
I read in there during the day and if the sun shines , it’s warm even in winter.
When the family come, it’s an extension to the lounge and gives us much more space to spread out.

I would clear yours out, Nandalot , see what needs to be done and definitely keep it.
Good luck with whatever you decide. 👍

Definitely splash the cash, it will be better insulated and no doubt it will get more use plus increase the value of your property. Get a skip to take away all the junk or if anything worth money garage sale or car boot

I too love my conservatory and would not be without one. We spend every day we are at home in there. We just have a fan heater we use now. We do have electric under floor heating, but it takes so long to heat up as it is on sensors and too expensive to use. I love the heat in the summer, have French doors and open them up or sit outside on the extended patio. My garden is now just a small sun trap easy to maintain and very simple
. Love it.

I've opted for a slated roof. The glass walls give enough heat all year round. Certainly wouldn't like to be without it.

In your position I would clear out the clutter. Sell the outgrown bikes, send the other bikes back to DD house too.
I like the suggestion of a sale to shade the glare at the roofline also.
On a different note, after clearing it out, do you know a local joiner/ builder who could give you some alternative ideas?
I would definitely keep it though.

Is your road having a street party?