Hello all, and good, healthy wishes to you!

The mogs, Minnie & Sprout, use the kitchen window for their comings and goings.

Consequently, that particular window handle gets a lot of use!

Well, this morning, after being a bit wobbly for a while, it dropped off.

As the weather is less than wonderful, I went outside and pushed it shut.

So, as I'm not working today, I have been able to be on hand as a cat concierge

Sprout positions himself on the windowsill, wanting to go out. I open the front door, make encouraging noises. Nothing. Go into kitchen to find him still on the windowsill, doing that sort of slow blink "smile" (cat staff will know what I mean)

Bodily move him to the hall, where he spots the open front door, which he daintily minces through.

A while later Minnie appears on the outside of the window. I open the front door, and again make encouraging noises.

These didn't work. She doesn't do cat smiles, preferring instead to opt for the "gormless and wide eyed" look.

I ended up having to pick her up and cart her indoors. She rewarded my efforts by going to the litter tray and producing a stench that wasn't at all relative to either her size or usual demeanour. (Although, having said that, when she is going "cracker cat" she goes up the stairs like a pit pony on steroids).

Mr P is going to get a replacement handle first thing tomorrow!

Neither thick nor stubborn - just expecting the staff to respond to their every need!

That sounds like cats I’m afraid. We haven’t got one anymore, but your story makes me want one or two sooo much. I must like being a servant.

Hilarious ! That's just how I get my daily exercises done---up and down like a fiddlers elbow letting the 3 cats out and back in but not all at the same time, especially if I'm unusually engrossed in something on the TV.

When I'm online, Bertie goes towards the patio door, I get up to open it and then said cat doubles back into the kitchen sitting by an empty bowl, so this tactic is to get me on my feet. Cats are so annoyingly clever.

I think you're lucky EllanVannin when I'm on line Dylan, when he gets tired of sitting next to me and being ignored, walks across the keyboard!!!

EllanVannin I thought the phrase was "in and out like a fiddlers elbow"? Or of course "up and down like a whores drawers" ! !!!

We’ve had three cats over the years. Two of them used to walk across the keyboard on the desktop computer when it was in use. One of them used to sit by the piano listening to my husband play. She also sat by the oven went the meat was roasting, waiting for her slice. Another used to sit on the garden bench whenever the barbecue was lit, waiting for his piece of chicken. I miss them so much.

Smileless2012 what???? I believe an old phrase that could also be used was "up and down like a bride's nightie"!!!

I have a cat/dog flap, but if mine spots me through the glass doors - she makes a racket until I open one! The stairs are her playground for the 5 pm scatty time, when she flies around on them, sideways ans upside down, like climbing a tree.

I believe the dog is somewhat thick. She hates rain on her face. If it's raining she refuses to go in the back garden, yet pesters me for a walk - until I open the front door to show her that it's raining out there too!

Cats have no reason to change their routine when staff are available. Most are bright that way. On the other hand my daughter's cats were at the back of the queue when cat brains were given out. All the cats had lived in DD's first house which had a cat flap in the door so knew how to get in and out. When they moved there was no cat flap but, of course, there was a door. One night DD was awakened by a banging noise so woke SIL to make him go down and check. He called her downstairs where one of the cats was repeatedly banging his head on the door in the spot where the cat flap had been in the other house no doubt wondering why he couldn't get it open.

Far from being thick, the cats are really quite clever in being able to manipulate their human. I've been a cat servant for 40 years, and every cat I've had the privilege to serve has managed to have me at their beck and call.

I have two Burmese and so they are house cats. In order to get fresh air in the summer I bought a catio which is expensive but I can have doors open in summer. I can have a cat flap as well so they can get in and out without staff presence.

Oh do stop phoenix you're making me

How fab Artdecogran I love Burmese. I have a sphynx house cat and will get Mr. S. to post his picture. 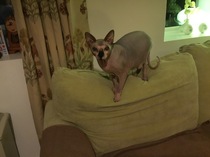 I've got a mad kitten, he just won't be trained he ate half an egg plus shell, piece of cement and part of a sponge. Wallpaper us ripped off books chewed, he sits under the tablecloth ,I could go on snd on. When I try to shut them out of the kitchen one goes out and one goes in then when I chase the one who's in, the other sneaks back. I just hope the young one grows up quick for my sanity as he's teaching the old one to follow his tricks

Artdecogran I have two Burmese so they are house cats why?

My daughters cat used to jump up and down outside her French doors, letting his feet make that sound like fingers on glass.

Then when it all got too much and you couldn't ignore him any longer you'd get up to let him in.

Then he'd put his nose in, turn around and saunter off.

My husband is a dog man and was brought up to dislike cats. We ended up getting a cat and the little moggie very quickly had him beaten into submission.
He invented a game where he would put newspaper on the floor, put his hand underneath and wriggle it. As soon as the newspaper went down her little bum went up and wriggled and her head went down.
He didn't come out of it well but was daft enough to keep doing it.

Sprout does seem to know that appearing at the kitchen window once we have gone through to the sitting room is a waste of time.

So, he thumps like hell on the French windows. We don't open them, but he quickly moves to the other sitting room window (which we doopen) and sashays his way in leaving muddy paw prints on the window sill.

Phoenix He was feral, until I caught him, carted him off to the vet for treatment to an infected paw, fleas, worms, and had him neutered and microchipped. He's the loveliest cat I've ever had

My little Stella, who lived to be 18

Oh Salsa, another beauty! Strange how the worst seeming animals can become the best pets, I had a similar experience with a dog I rescued.

What movie scenes make you cry

Northern Ireland is in more danger since Brexit