My sister Margot, the labrador and the cake.

Looking at some of the lovely dog pictures on the Pets forum made me remember a funny thing that happened many years ago.

My sister Margot was staying with us and she decided to bake a cake.

Well that cake turned out to be so hard and horrible nobody could eat it,

In a huff, my sister said "well the dog will enjoy it anyway".

We had a golden labrador as as many will know, they will eat anything - they are know as garbage cans.

My sister took the cake down the yard to the dog .

My sister had to concede that the cake must have been pretty bad.

Our collie/shepherd cross ate a large piece of ham that was cooling on the worktop while we nipped out one Christmas day. She also scoffed her tea that we'd given her before we'd realized what she'd done.

My mum and dad had a cat and a dog both black and white who hated each other until it came to food my mum walked into the dining room one day to find the cat on the table licking the butter from the bread and knocking it onto the floor for the dog both were put outside when my parents stopped laughing at them , the same dog after the cat had died was found sat on the dining chair feet on the table eating just the yolk from my dads fried egg and when my dad caught her she just looked at him this dog still likes sitting up to the dining table now , my dad leaves a bag of sweets or biscuits on the coffee table at the side of his chair many time we have caught the dog sat in the chair with her nose touching the packet and when you say her name she looks at you as though to say ' what I'm just sniffing them ' I used to have two cats who if I was eating while sat on the sofa would sit on the back rest and watch me eat every bite .

I have a sense of deja vu that phoenix will be along with a good story quite soon.
One summer's day, when my DD's Vizla/Lab cross dog was quite young we were having lunch in the garden. I took the plates indoors to find that he had found two trays of eggs on the kitchen counter, knocked them down and eaten quite a lot of them, shells and all. There were 60 in total.
He was rather poorly overnight.

Many years ago my bil who was a fisherman prepared 30 herring fillets in brine for pickling. We will never know how our dobe managed to reach them in such an out of the way place. When my sister came home from work at lunchtime he had demolished the lot. Fearing he would be raging thirsty or have kidney problems, she left a huge pyrex dish of water for him. When she came home later, he had drunk all the water, then peed for England, so much so that it soaked through the floor tiles, and the lot had to be lifted and replaced. He also once ate 3 whole crabs, shell and all, that had again been placed in such a position that we could never figure how he reached them. 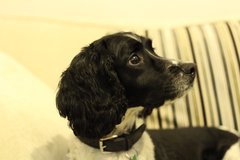 It's not just land who are sneak thieves! My springer spaniel, Charlie, is an expert at it. Once, I was cooking pasta and meatballs for dinner. I cooked the onions and got six rashers of expensive, dry cured, smoked, streaky bacon out of the packet to slice up for the sauce. I turned my back to return the pack to the fridge and when I turned back, no bacon! The crazy thing was, I was utterly confused. I was alone in the kitchen and the bacon wasn't there! I checked on the floor and even got the packet back out of the fridge to count the rashers. Mr Sneaky Silent Paws had been in and snuggled them. He was unmasked as the thief when my son sniffed his whiskers and detected the smoky smell. He looked so innocent!

Back in the 70s, when shag pile carpets were all the rage; we had 2 cats who worked in synch to steal and eat anything they could. One day, they worked as a team to knock a large fish pie off the worktop and devour the contents. I'd made the fish pie for visiting relatives who were coming to tea and so had to hastily clean up what bit was left and set about making a substitute meal. Half way through the substitute meal, both cats started making that awful heaving noise as they threw up the fish pie. Everyone was suddenly galvanised to grab a cat and chuck it outside, which made the mess even worse. Have you ever tried to extract regurgitated fish pie from a shag pile carpet?

Lol - brilliant. Thank you for making me smile

Always had dogs and cats and so quite good at keeping one jump ahead of their wily plans to steal stuff. However one day we came home to find terrier had been in utility room and in the (usual) absence of legs of lamb, plates of steak etc., had patiently opened a hessian sack of basmati rice! We laughed but the mood changed when we saw how much was missing. He’d eat uncooked grains of rice? Course he would. Listening to his stomach noise - like a lot of really loud and groaning machinery - we took him to the Vet. Vet’s diagnosis? Dog possibly was bored and thought he’d have a go at brewing some Sakē. Much laughter but we were relieved that he never exploded or needed the gas removed from his poor tum, and don’t think he ever lived that down, bless him.

Chewbacca I've got a large, long pile rug in my living room and we are up in a flash to get the dog off it if he so much as coughs!

I used to look after an old farmer’s wife who lived in the kitchen of the old farmhouse, by the big range fire to keep warm. She had several cats, and even the chickens would come in out of the yard at times. On the big stone thrall, there was always a tray with a large pat of butter, chunk of Cheese, and homemade cakes and bread left ready for the farmhands to have for lunch when they came up from the fields. There was always a few added ingredients though, Cat hair stuck to everything where the cats had sneaked in and helped themselves, and mouse droppings where the cats had failed to do the job of keeping the vermin in down as they prepared drinking the milk and eating the cheese instead!
During the summer months, the place was also swarming with moths and flies, attracted by the fruit and jams put to set in there, although none of the human occupants of the place ever bothered about the obvious lack of food hygiene and carried on eating regardless!

I once made a bilberry pie with some berries that had taken all afternoon to pick. I put it on the table to cool and our dog Sam managed to get up there somehow and took a large bite out of the pastry. He’d never done anything like that before so I thought it was safe. Really didn’t fancy the rest after that!

Grandmafrench Charlie stole a wheaty bag and ate the contents. It's like a psychological compulsion with him. He'll eat absolutely anything, including my clothes. 😕

Another daughter who has a rather naughty cat left a roast chicken cooling on the worktop while she did the school run. Tightly covered in foil I might add.
She returned to find a neat hole in the shape of a cat's head in the foil, and the chicken stripped to the carcass.
She WhatsApp'd me the photo of the crime scene and I have to say, it was a professional job.

We had a rescued golden retriever who loved tea, if you put your mug down for any reason it was gone when you came back, Bonnie had no scruples though, she even pinched the electricians who had come to do some work!

If you have a lab you don't need a hoover. This video is a fine example:

I made a suet jam roly poly some years ago and cooked it in my newly acquired microwave. When it came out it was like a brick, nothing would penetrate it, I buried it in our newly dug vegetable patch thinking it would break down and provide nourishment, year on year said roly poly would immerge from the depths dirty but totally unscathed.

We sold the house, I wonder if my trophy is still there.

Thanks for the laugh Fatgran - much needed!

Sorry - that doesn't seem to work. Try this www.youtube.com/watch?v=dYTSS14SFY0

On a slightly more revolting note. My Labrador Molly used to eat socks when she was a puppy. My friend offered to walk her for me with her dog one afternoon when I was busy. When Molly started to have her poo, my friend walked over with the poo bag at the ready and it came out wrapped around my partner's black sock! she had to ease it out gently whilst gagging. She has never offered to walk her since!!

lizzypopbottle take Charlie back and complain - I think you’ve been given a goat, not a dog 🤭

Laughing at the image of a cat's head shaped hole in the cooking foil!

Anyone else going STIR CRAZY?

Want to scream at husband....