Good Morning Everyone,
Its another bright and dry start here in Brackley this morning.
Do my essential shop, before I return home, and lockdown.
Looks like another 3 weeks until May 7th.
Planning a slow cooker meal for Sunday and Monday , more tomorrow.
Mick

Good Morning Mick and all who follow from a dry Severnside.

I expected the lockdown extension but it did give me a wobble.

My SiL and I did some messaging yesterday. She sent me a photo of herself dressed for her walk and said they had snow with more forecast for today. I told her I was wearing shorts.

My prawn mystery meal turned out to be with a jacket potato and homemade coleslaw which was very tasty.

A pottering day for me I think and will have a FaceTime with DD. 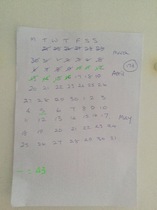 My lockdown tick off

Morning everyone, esp., Mick. Up early as woke worrying about DH supermarket run today. Ridiculous feeling like that but it’s possibly something that will still affect some of us even when we’re free again.
Going for a walk first which today might see us avoid too many others at this time.
Then a shopping list - which will contain chocolate and definitely bananas and cream and biscuits so that I can make a Banoffee Pie for DH’ birthday tomorrow. It’s going to be a quiet birthday for my favourite Aries but we’ll do something fabulous when we get parole!
Onwards, upwards into another blue day. Stay safe all. x

Bad night as up with poorly dog. If only I could get those drops in his eye!

Hope everyone has a good day and Urmston is feeling better.

Good morning Mick from a bright morning in Cheshire also. Your good morning sets the tone for the day! How can it be Friday already?

Had a bit of a shock when I went to make an early cuppa at 5.00 to find I'd left a bottle in the freezer and forgotten it! Major clean up of the freezer drawer as I've got a supermarket delivery this morning. Also got a line of washing out and am back in bed with a coffee.

As a bit of total indulgence I'd ordered some flowers from M&S and they are beautiful. The first real treat I've allowed myself in 4 weeks and I hope keeping someone in employment.

Walking at 9.00 a.m. The trees in the woods are lovely at the moment with their bright spring foliage, but the pollen affected my eyes so badly yesterday. That walk sets me up for the day though, However, if Captain Tom can manage what he's achieved I'm feeling like a wimp.

Morning all.
Not so nice in E Kent, sullen windy weather.
Not doing anything much, perhaps go to farm shop on our walk to see if they’ve got any asparagus.
Beware grandmafrench. DH and I went shopping together as usual on Wednesday, as we got to the door we were very firmly told that only ONE of us could go in. A bit panicked. A bit p....d off as most other couples were allowed in.

Morning all from a very windy north Wales where I’ve been up since sparrowfart psyching myself for the fortnightly shop at Tesco. The extended lockdown hasn’t affected me as much as I thought it might - in fact, I’m getting a siege mentality and don’t want to leave home!

That banoffee pie sounds delish GrandmaFrench - if there are leftovers, send em over here!

Good morning from east London, blue sky with a bit of cloud and fresh temperature outside. The forecasters are saying there’ll be rain later; we need it as it’s so dry everywhere. I reckon I planted up about 80 tomato seedlings yesterday and they’re looking fine this morning. DP is quite chuffed as he has finally demonstrated there is a purpose to keeping empty plastic fruit containers as I started using these once the pots ran out. Just need to pass them on now. Have a good day.

Grandmattie fear not, we like doing things together (or we did before all of this) but ....we agreed when we were first locked down that only one of us would go, to reduce the risk. Then we saw that only 1 person allowed anyway here! My anxiety is for DH!
I could start Banoffee-by-Post, Pantglas then yours could arrive to accompany your chamberpot 😁. Sadly leftovers in this house unlikely!

Good morning from sunny Colchester. Beginning to get used to this new normal but running out of cupboards to sort.
Will send DH for weekend supplies as he is antsy and needs to be kept busy. I will change beds etc.
Look after yourselves xx

Good morning everyone from a sunny Inverness !! Yes at last the sun has arrived up here, it’s not that warm of course but the sun makes such a difference !

We joined our neighbours on the doorstep for the clapping last night, a great turnout with drums, pots and pans and someone playing the bagpipes again !

I’ll be doing my online exercise class this morning then out in the garden waiting for things to grow and attacking any weeds that dare come out. We’ve got 2 pairs of birds nesting in boxes in the garden and it’s lovely to see them coming and going

Sorry to hear about your poorly doggy dragonfly46 , I hope things improve soon

Good morning all from a North Leicestershire which has brightened up since dragonfly posted.

I have a Sainsbury's click and collect today and I have really stocked up in case I dont get another one.

Take care out there everyone.

Good Morning all from East Staffordshire. The weather looks nice out there.
I am laid up today after falling from my bike yesterday and the pedal hit my calf. I can’t walk.
I didn’t even have the dog attached so cannot blame her, I tried to cycle up a steep bank and fell sideways.
DH will have to run around after me for a few days.
I hope everyone else is doing ok and wondering if gilly is ok as she didn’t post yesterday.
Stay safe everyone❤️

Good morning all a very wet Torbay this morning, rain hammering down. Will have to wait to take doggie out.
Missed my coffee morning this month with the lovely Gransnetters hope they are all safe and well.
Take care all and stay safe xx

A breezy and overcast start here on the Suffolk coast. So lovely yesterday! Finished cutting down the pampas and I know it will start to shoot again in a couple of days, but at least ive got rid of all the old flags and foliage. Not much sign of our seeds growing. Planted a week ago. I look twice a day but I’m impatient to see some growth. I’m pleased about the lock-down extension. It was too early to ease up, but my thoughts are with people on their own. Every day brings us closer to freedom. Good idea to tick off the days, BEECHNUT. The lettuce I bought for our salad yesterday was black all the way through. It looked fine on the outside but as soon as I cut it black streaks appeared. Not worth returning it. Rain is due today which is a good thing. When I think of January and February and how it rained and rained. Mud and water everywhere. I wonder how the people who had floods up north are now and if they’ve recovered at all? 🤔. Terrible for them ! I’m glad some of you read the poem I mentioned yesterday. It’s so right for this moment in time. ‘And the people stayed at home’ by Kitty O’Meara. Have a kind and gentle day 🌺

Good Morning Mick and all from a cloudy part of the S Welsh coast.
Sorry that your DD's dog is still poorly dragonfly I don't know what to suggest, maybe if you rang the vet, he/she could suggest something?
We joined in the doorstep clap for the NHS last night.
Stay safe everyone.

Up early to brave oldies’ hour at Tesco. Always a long queue as people are only allowed in as others exit, but it does mean that getting round the shop is easy, though the one way signs appear not to apply to staff picking stock for deliveries, and indeed making getting to shelves quite difficult.

Still, it has become my weekly outing so I am not grumbling. If I am not allowed to do this one thing I would be really fed up.

Not keen on the notion of compulsory face masks. How will that work with a behind the ear hearing aid? More things sent to try us no doubt!

I don’t mind brook2704. I got the idea from Urmston when she used to say what number day she was on.

Morning Mick and all who follow sunny but windy in black country not much planned for today. DH will get car out for a run drop me in the queue at supermarket while he waits in car. Then back to catch up on my competitions which I enjoy doing. Take care everybody and stay safe.

Good morning from Hampshire. Looks dull, we could do with some rain, but not around 3.00 when we take our walk please.

Good morning from an overcast NE.
It wasn't garden weather yesterday so spent a lot of time reading.
The family will do a video call tonight. They seem to be coping, not seen any grumbles on FB.
Will finish watching The Nest today and probably my novel.
Stay safe everyone.

Good morning from a bright and windy Northampton. Rain forecast for later. Was hoping to sit in the garden yesterday, but decided it was a chilly wind. Dried the bedding nicely though. Was glad to solve the problem of the mysterious beeping - turned out to be the laptop telling me it needed to reboot.

Think I had a bit of a panic attack yesterday afternoon - felt sick, stomach churning, a sense of intense fear and dread. It passed off eventually, but was not pleasant. I am putting it down to fear of the virus, worrying about catching it and that I've got symptoms. Really need someone to give me a stern talking to. Doesn't help being alone. Decided I couldn't eat any dinner, but felt hungry by about 6.30pm, and really craved a chip butty! So that's what I had!

Hoping today goes better than yesterday, and that all have a good day.

Goodmorning Mick and all x

Takeaway night so I do not have to think about dinner, yippee!!

I tried all the supermarkets first thing for a Home delivery and Tescos was my last chance and I have secured a slot for Sunday week......Hip Hip Hooray!!! Have not shopped in Tescos for over twenty years, so it will be interesting to see what arrives.

Three more weeks, Oh dear, but I appreciate that it is necessary.

Taking shoes off before you come inside your house