Good Morning Everyone,
Yet another twilight start but its dry here in Brackley .
Just basically did Bicester yesterday ,and did a small shop in Sainsburys as I needed a new duvet was surprised at the price , thinking it would be allot dearer ,makes me wonder with reductions whether old stock is still om shelves as regards to non essentials .
Also we have just had a fair in brackley despite the current situ as to virus , popped out to get a take away , having watched the TdF yesterday ,and having to walk through some of the fair late afternoon , one of the rides had already packed up, and ready to move on.
Today watch TdF later as the drama of the race unfolds .
Take Care ,
Mick 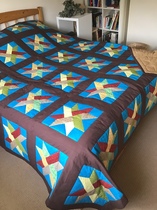 Good morning from a bright E Kent. Looks like we shall have sun ☀️ today.
Mick, household goods tend to be very cheap at this time of year as parents set their children up for Uni; bedding, crockery, microwaves....
Finished my famous quilt. 36 squares, edged etc. Very pleased with it. It only took 3 1/2 months to make - that’s what our enforced incarceration did for me!
Hope those feeling unwell (*Marydoll*, kitty, Urms, gilly ...) are feeling better or as well as they can today. Have the best day possible. Stay safe.

Morning Mick and all who follow from dark Espana - sunshine on its way!🌞

Hope Kitty and Urms are on the mend and everyone in the sick bay (+Hattie) feeling better after Matron’s (Miss Marydoll- is there no end to her talents?) ministrations!

A quiet day sorting clothes/shoes I haven’t worn into a bag for the charity shop- I do like a de clutter before I leave mi Casa!

A peaceful Sunday to all 💐

Morning Mick, morning All from a brightening corner of Somerset. We are also promised sunshine, hooray. Fabulous quilt grandmattie, I’ve no talent for anything requiring that amount of accuracy and patience. No idea what we’ll do today, Mr C feels a bit weary so I suspect a quiet one. Get well wishes for all poorly people. Take care everyone.

Sun’s (just) coming up! 🌞
Good morning everyone from Malaga 😎

Another day in the sick bay for me I’m afraid. Bathroom trip as soon as I awoke. I slept well though.

I just ate toast, a banana and a jacket potato yesterday. Plus drank plenty of water (NHS guidelines).

I don’t think it’s Covid. I’ve not been anywhere! No taxis, buses, trains. No supermarket or markets. Yes bars and restaurants but all SD and spotless - always outside on a terrace.

Ah well, hopefully today brings some improvement. Are you feeling better kitty or do I need to budge up?

Maw I do hope Hattie is more herself today. You will have been watching her like a hawk last night.

Hope Sunday is kind to us all. Just remembered Himself will be watching the Grand Prix this afternoon whilst I’m confined to barracks. Aargh! Does anyone have any spare ear plugs?

grandMattie that quilt is absolutely GORGEOUS! How talented are you?
😊

Good morning everyone from a very damp and sogggy Inverness but with the promise of it drying up sometime later.
What a beautiful quilt grandmattie well done it really looks good 👍
Nothing planned this morning but later today we’re collecting DGS1 and DGD as we’re looking after them until Tuesday - they’re off school due to 2 in service days at the beginning of the week. I’m looking forward to seeing them!
Hope everyone feeling poorly has a better day today and take care whatever the day brings 💐

Good morning all from a sunny Essex by the sea.
It looks like DH will have half shares in a boat soon as long as they can find somewhere to keep it. I think they are visiting a boat yard tomorrow to see if there is space.
This morning we are going to watch 2 grandsons at their rugby training.
Later it's the grand prix to watch.
Both our teams had wins on the first day of the football season yesterday so we are both happy.
Grandmattie what a beautiful quilt, you are very talented. I dabble in patchwork but nothing like you.
Have a lovely Sunday everyone and stay safe xx

Good morning all that was some winters night wind and rain it feels quite cold this morning again on the east coast of Fife hope there not been any flooding like last time when the nurses in the local hospital finished their shift to find their cars submerged it was disastrous. Have a good day everyone keep safe and enjoy your Sunday

Oops missed out the apostrophe in there’s

Morning all from a bright ish North Leicestershire.

Thank you all for your good wishes yesterday.

Sorry you are still poorly urms. Having spent most of yesterday either talking to or waiting for 111 (who currently dont seem to know what is going on!) A doctor rang me at 7pm from a car somewhere in the village and then pushed a packet of antibiotics through the door. So, I should be better before long.

How is Hattie, maw?

New recipe for belly pork to try today - well DH will try it. I didn't eat much yesterday.

Good morning from a murky Morecambe Bay.
What a lovely quilt and achievement Grandmattie. I haven’t got the patience to do anything so intricate. My limits are plain sewing or crochet.
We will be taking Little Miss home later. She lives in an area threatened with full lockdown so it may be a while before we see her again. Yesterday we played on the beach with DH making her a big sand boat to play in.She absolutely dotes on him so he has to see to her if she wakes during the night.
Hope the numbers in the sick bay diminish soon. Take care and stay safe everyone 🌸

We don’t mind on here Elizabeth1 (well I don’t) it’s just good to hear from everyone.
😊😊

Good morning all from a not so pleasant Glasgow.☹️
I had a night of very disturbed dreams involving Maw and the West Highland Way.😂
mobb, you didn't tell us Maw was walking with you.😉

Grandmattie, the quilt is absolutely amazing. What a talented lady.
You could start a business, do commissions and make your fortune. 💷💷💷💷

I have no plans for today at all, reading the papers is about my limit, in-between bouts of coughing.☹️
The hacking cough has returned with a vengeance and I have lost my voice into the bargain. DH is particularly pleased and pretending he can't hear what I'm asking him to do. 😠

Have a peaceful Sunday, everyone. Urmstongran, I hope today is a better day for you and your stomach settles. 💐You may need to eat nothing at all to stop all the running to the loo.

Good morning all. It's a grey day on the Angus coast although the sun is doing its best to shine through the cracks. Your quilt is beautiful GrandMattie - you're right to be proud! Sorry you're still feeling grotty Urns but glad you slept well. Sad news here yesterday. DS1's FiL passed away. A blessed relief for him I feel, but so hard for everyone. At least his wife was allowed to be with him. Today looks like it will be a batten down the hatches day. Have fun, all those who can, and feel better all those who are poorly. 🦋💐🦋

Good morning from a sunny Poole, back home today but yesterday was glorious, both of us a bit pink!
What patience grandMattie amazing! Sorry for those poorly, get better soon all.

Good morning all from a fine start here in Essex. We are in for heatwave for the next few days. Up to 30 degrees. Sorry northern and Scottish grans! Hope it’s not too bad for you 😢

We have DS1 and family coming for coffee and lemon drizzle cake (made yesterday) this morning. It’s their favourite! 🍰

DH is going to his fishing club as it’s pond clearing day. He went fishing on Friday and dropped his phone in the water. 😤. He’s hoping to find it today. I don’t know why he’s bothering - it won’t be any good. 🤪

grandMattie your quilt it gorgeous. What a lot of work, time and patience has gone into it. A lovely family heirloom to pass on.

I hope all ‘sick-notes ‘feel better today. Take it easy and rest up.

Not sure what lunch is today, fed up with Roasts, any ideas ?

Have a gentle day, all 🙏

Good morning from sunny Colchester.
Making the most of the warm weather by having a bbq at DD1's.
What a fabulous quilt Grandmattie.

Good morning All. It's a day for indoors here in Polmont. Wet and windy out. I'm sat with dgs beside me, in our jammies, watching his favourite film, 'Cars' for the millionth time. Despite my worries, he slept all night til just before seven. I, on the other hand, barely slept as I was worried I wouldn't hear him if he was upset in the night. So the pair of us will just chill this morning til mum and dad pick him up. Grandmattie your quilt is a work of art. Beautiful colours too. Taichinan I'm very sorry for your loss. Marydoll it's rotten that your cough has returned. They are so tiring, aren't they? Urmston sorry to hear you're still unwell. I'm feeling a bit brighter today which I put down to dgs and his company and your good wishes. Bless him, he's just told me a very long story in baby talk and kept looking at me earnestly for a reaction. I wish I knew what he was saying. 💐 To everyone who needs it.

Good morning from Shropshire.Another warm day forecast although it was blowing a gale in the night.

Didn’t have a very good night,the howling gale woke me and then my mind got to work so am tired already today🙄

We are looking after Henry for a couple of hours at lunchtime while our daughter takes DGD to a birthday party.We plan to have a walk down their lane and collect some blackberries.With a few apples from their tree we will make crumble when we get home.

Maw,I hope you and Hattie managed a restful night and she is showing improvement today.

Sending good wishes to all with illness or worries.Have the best day you can all.

Good morning Mick and all

grandMattie you are very talented that quilt is stunning.

Good morning, Michael and all GNs from a sunny South Yorkshire. We had dinner in DD’s garden last night, with the guinea pigs roaming round the lawn. Then we did our shopping in a very quiet Aldi on the way home. Not sure what’s on the agenda today; not a lot I suspect. Roast chicken for dinner.
Grandmattie that quilt is a wonder! Well done. I wouldn’t know where to start. I only make rugs because I can get away with them looking like a dogs breakfast!
Have a good safe Sunday, folks.

Good morning from Oxfordshire.
Looks like it should be a nice day.
GrandMattie the quilt is gorgeous!
Hope everyone in the sick bay is on the mend soon.
Happy Anniversary to you both GrannyGravy13

What I would ban? and what would you ban?