Hello
As above. I was diagnosed with OA in March prior to lockdown.
GP thinks that there is more to it, but I haven't been able to have any further tests etc for obvious reasons.
However, I'm having an injection/s this afternoon at the GP's.
What should I expect wise ladies?
Thank you!

So pleased for you annsixty, bet you can't wait! I'm still waiting for my appointment 're TKR. I spent about 2 hours on the phone yesterday trying to chase up whereabouts I'm on the list now and like FannyCornforth they've lost the latest letter my GP sent to them 6 weeks ago. Luckily, he'd sent me a hard copy of it so I scanned it and emailed it to the surgeon again. I'm working on the principle that the squeaky wheel gets the oil and will mither them every week.

To anyone who is waiting on a hip or knee replacement I say don't put these off if you have the chance to have the operation. I understand that some have no choice but to wait because of the system. I put off having my knee done for 3 years, put up with the pain and loss of mobility and in the process did more damage to both knee and hip. In the end my hip became more of an issue due to both pain and it giving away regularly so that was done last October. I had intended, at the surgeon, suggestion, to put off my knee for about 12 months but it became too much to bear and so it was done 3 months ago. While I have not regained as much mobility as I would have liked - there are other contributing factors - simply living without the pain or fear that the hip will give away is worth it. I wish I had taken action earlier. 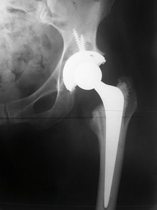 My hip replacement came as quite a shock. The left hip had been getting worse, I thought that I had injured it and that it would heal, in time.

My doctor had me lay on the couch, she placed both hands on my right thigh and rolled it back and forth like a rolling pin. When she repeated that procedure on my left thigh the pain was so intense that I involuntarily grabbed her arm, just to stop her. She just smiled and said, I think you need an x-ray.

The x-ray confirmed my doctor's prognosis. But instead of going on the waiting list I went private and chose The Nuffield group.

The operation is quite brutal but the epidural means that my lower body was all but paralysed and I felt nothing. You might laugh but I wasn't worried about the surgery, what I was dreading was being catheterised.

But even that was a breeze, after all, there was no sense of feeling below the waist. After surgery I was in a small room, more like a hotel room than a hospital ward. The nurse assigned to me was an absolute dear. She was so professional.

The antiseptic swab on my body has to come off. A bath or shower were both out of the question. My nurse, whose Nigerian accent had to be listened to, so that I didn't keep saying sorry, what did you say?

What she was saying was that although they do their best, in hospital you must expect that modesty and dignity take second place to a speedy recovery.

She had a bowl of warm sudsy water ready to wash off the antiseptic swab. She lathered up a face flannel, and said: "You wash the crown jewels," then she took the flannel, turned me around and wiped straight between my buttocks, saying: "And I will do the credit card swipe."

A day later and I was having my new hip x-rayed. It's not like x-rays of old, it's now digital, the image is an actual image. I saw my own hip on the computer screen. "Is it possible to have a copy of that?" I asked the radiographer. "Give me your phone number," she replied. Once back in my room I saw a text message on my phone, a picture message. It's my hip replacement. I was discharged the following day, but I heeded medical advice and didn't return to work for twelve weeks.

Thank you Spangler.
That was a very interesting account.
Knee is feeling great today.
Yesterday I had a really funny turn.
I couldn't stop my hands shaking for hours and could hardly string a sentence together.
My dad's wife (who was a doctor's receptionist - so practically a member of SAGE) said that it was a reaction to the anaesthetic in the injection.
And I got a letter from Rheumatology yesterday.
I'm on the waiting list for my first appointment!

Painless and no problem. Hope it solves your problem.

I think is is worth mentioning that I was told 4 years ago when I had my TKR, that after an injection it is not possible to do a replacement for 6 months.
I don’t know if this still applies.

I had an appointment for an injection but when my GP saw the x-ray she told me this and referred me straight away to an Orthopaedic surgeon and I got my op 14 weeks later.

Yes annsixty, I was told the same thing about injections delaying any surgery for 6 months too.

Thanks Ann, I think that it is likely that they will do my hip first.
At least I'm in the system now!

Thankfully things are moving again and if it is true that they will try to maintain Covid free hospitals the system may get back to normal.

Fingers crossed annsixty. My GP has just rung me again today to say that he's writing to the surgeon again to ask for me to be seen urgently. Squeaky wheels and all that...

I've just got a text.
I've got an appointment with Rheumatology next Thursday!
Good luck Chewy, you keep at them.

Fanny, that great news. I have had five RA appointments cancelled since March, as too risky for me to go to hospital.
I now have a telephone one for October.

It does mean I don't need to travel across Glasgow in rush our. Every cloud has a silver lining! 😁

Thank you Chewy and Mary.
I'm yet to find out whether Ive got to go to the hospital or do it virtually.
MrC, who has absolutely awful RA, has had everything cancelled, even telephone consultations.

I saw a consultant yesterday.
It's not RA but the rheumotolgist is investigating.
He is pretty certain that there is something the matter with my spine.
He was pretty shocked at how immobile I am.
Im having an MRI scan on Monday on my spine.
Im mulling over getting a scooter or I will be housebound.
At least something is finally happening. I've been fobbed off for fifteen years.

That’s appalling, FC but I’m glad things are moving forward for you now,

FannyC that is worrying and I am sorry to hear it. You have had to wait far too long, but at last someone is taking notice and investigating further, I hope it brings some sort of results.

I also want to apologise very sincerely for getting off on the wrong foot with you . There are no excuses and those who know me will I hope bear out that it was out of character.
Anyway, I am very, very sorry

Fanny, I'm glad to hear you do not have RA. It is a horrible, insidious disease which quietly destroys your body, without you realising it.

However, it's not so good about your spine. The MRI will give your a consultant a picture of what is going on. That in turn will hopefully open the doors to a treatment plan and pain management.
It was twenty years before my RA was diagnosed. It had been masked by the long term steroid treatment for my lung problems, by that time the damage was done.

Try and stay positive, , hang on in there. It is especially demoralising when you have had to put your teaching career on hold. 😢
I know, I've been there. Occupational health should also be aware of your health issues and supporting you.

You are very fortunate that your consultant is proactive and not fobbing you off, patients can wait months for MRIs.
I'm not trying to minimise what you are going through, but am trying to find something positive in your situation.
I have done the despairing and feeling sorry for myself scenario, it just makes things worse.

Each day, try and find one thing to look forward to, even if it's just coming on GN or settling with a good book. Good friends are a boon.
I promise you, it will help you get through the day and deal with your situation.

I will be following your journey. 💐

Thank you for such a lovely message Marydoll.
So thoughtful of you.
Yes, I know how debilitating RA is as MrC has it. It's awful how long you had to wait for a diagnosis.
I'm lucky that I'm not feeling sorry for myself at the moment.
I'm actually feeling very upbeat that I'm finally being taken seriously.

What would you do?

You should make an effort...

Do you have a song (songs) you can’t stand ? *Title edited by GNHQ*