I do feel sorry for him. Even though he must have given the choice he made considerable thought beforehand.

Does anyone know if perhaps he made a symbolic 'wreath laying' on line?

Obviously thats about all he could do given Coronavirus and his new life!

Well he could hardly lay the wreath in person Given the distance he would have to travel but no doubt he will be criticised .......

Yes Namsnanny I believe he did a photo shoot WITH Meghan in an American cemetery!! 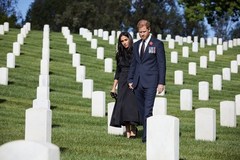 He made the choice, in or out, he chose out.

I wonder if he did give "the choice he made considerable thought before hand" Namsnanny.

An awful 'all about meeee' photo IMO; is there no opportunity, no matter how sacred that that pair wont exploit?

I just thought it sad that there were 2 members of the Royal Family missing - Harry and also Prince Andrew.
After so many years and for both of them to have served in action that they were unable to have laid a wreath,must have been hard for them.

I think they'd have been criticised if they hadn't done anything at all either, so they probably couldn't win. 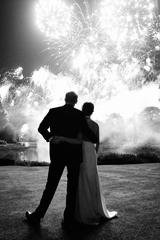 You have to say these two images are pretty similar and posed for the cameras. I don't like a remembrance moment being about photo opportunities.

Sorry, the photos doubled up,!

This was just another photo opportunity. A 'private' wreath laying with a handy photographer in tow.

But don't you think that if he was seen to do nothing, everyone would get upset that he did nothing and complain about him not caring? And if he does something, as he did, people will get upset about that and say he quit so it's not his place anymore? I think people would complain whatever he did or didn't do. I think I'd err on the side of showing I care, which I'm sure he does.

I rest my case

I agree OceanMama that he should have done something. But in a more discreet manner, without his missus using it as photo opportunity. I'm sure he does care, and it must have been hard for him.

After so many years and for both of them to have served in action that they were unable to have laid a wreath,must have been hard for them.
They aren't any more important than all the others who served.

I do think the queen did very well, to stand for so long in Westminster Abbey.

I am usually cynical, but think this time H and M did the right thing. I am sorry he wasn’t allowed a representative to lay a wreath at the Cenotaph on his behalf, perhaps on behalf of disabled servicemen given his involvement in the Invictus Games.
The RF takes no prisoners does it? Once you’re out, you’re out.

Do they have remembrance services on the same day as us in America?

When does the present arrangement come up for review? It must be soon.

perhaps on behalf of disabled servicemen given his involvement in the Invictus Games
That would have been fitting Maw2B.

When does the present arrangement come up for review? It must be soon.

They announced they wanted to leave early January, but think it was end of March when it was officially ‘the end’.
So expect 31st March 2021 is review date.

I think what disappointed me was the fact that UK newspapers on line close to run headlines with the photographs of Megan and Harry in America. Harry is not in the USA in an official capacity, and yet his huge wreath was on a stand at the monument, no other wreaths were in camera shot. Yes it was a nice gesture, but one which should have been done privately, not with their photographers in attendance, particularly when Harry says the click of cameras causes him to become anxious, something he appears to ave overcome in the USA.

Disappointed that the press (at the point when I looked on line) chose to lead with this, rather than the (hopefully) unique ceremony at the Cenotaph, which was immaculately observed under very difficult circumstances. Sadly it regrettably drew the usual comments, such as Blair’s presence, the Duchess of Cambridge’s coat, and the fact that the Prince of Wales’s gloves were somewhat grubby!

And as both Andrew and Harry are no longer ‘working royals’, I assume that is why they are no longer involved in wreath laying in any way.
Under the ‘pick and mix’ version H&M expected, he would have been doing stuff like that.

The presence of H and A would have detracted from the solemnity of the service. The number of representatives of many countries and organisations was drastically reduced; H has no official position, (his choice, ) therefore he could not be represented.

Can you imagine the furore if Andrew had been there?

anxiety by one member of the family