What cars have you had and what has been your favourite 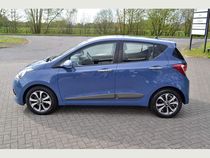 Been driving since 1984 and during that time
Austin 1300
Fiesta
Metro
Matiz
Honda Civic
And now.....Hyundai i10 as pictured.

My favourite was my very first one, the Austin 1300, lovely little car with bags of character. Very smooth drive too.

I seem to be hooked on German cars.
Volkswagen
BMW
Mercedes
They are not the most comfortable, being quite hard, but the drive is great.

My favourite was my soft top SLK which I chose in black with a red leather interior. I took my young daughter with me to Bremen to collect it from the factory, but she spent almost as much money in the Steiff bear shop as I did on my car!

Ah too many to remember- but my first car was an old red mini in the late 70s, which I maintained myself ( back then car maintenance classes were essential if you ran an old car) my next ( after a few years only cycling whilst overseas) was a elderly yellow Renault 5, then red fiestas (each only a few years old-passed down from my father). Once married we had a shared car- until I bought a yellow micro which I had from new until it was sadly scrapped ( my son grew up with the car) and now I drive the family hybrid ( which feels enormous) and my husband has the little red classic sports car.
I too was most fond of my first car- although it was noisy, often temperamental, freezing in winter, was not made for a petite driver ( I had rubber blocked clipped under the drivers seat so I could reach) and needed a lot of nurturing!

Fords. I've had several. Unfortunately, I've also had some that AREN'T Fords, including the Renault I have now.

I have loved most my little pocket rocket Fiesta. It was cheap and lasted 6 years. Pounded up and down the A1 to London & back repeatedly. It was SO fast (bigger engine) and I always referred to it as the Tardis, because I could fit SO much into it, including a whole sofa once. Oh, and a bed and mattress as well.

The only car I've been sorry to get rid of.

My mid life crisis car. My uncle left money to me and I bought a convertible sporty metro. The roof went into the boot at the press of a button. I loved it. It lasted 13 years. Now I drive a sensible car. Sigh

In 1975, hubby bought his brother`s old Hillman Minx estate to learn to drive in. We had it for just over 2 years, then bought another Hillman Minx, but a saloon, just as an interim, then we bought a Chrysler 2 litre. Our next car was a Ford Zephyr, so comfy, but temperamental. Next was a Peugeot 405, I wasn`t keen, then it was written off in an accident caused by a driver who didn`t stop. We were quite a while before we could afford another decent car, but we had a very cheap Sunbeam Alpine for a while, then a Ford Consul, extremely cheap, but a lovely car. Once we were back looking for a "proper" car, we bought a Cortina. A few years later we went "upmarket" and got our first Rover. After that we had an Acclaim, 3 more Rovers, and a Volvo, not one of the big ones, a smaller 1725cc one. We`ve also had a Nissan, but our last car was a Vauxhall Vectra estate, sold after hubby died, as I never learned to drive. Out of all those, my all time favourite was the Chrysler 2 litre, beautiful car.

Josianne
We had one of those. My OHs favourite was his 380SL.
That was a good day when someone came to buy the 380. We had a classic mini in the garage and he wanted to by that as well. Happy days.
We’ve had a lot of cars but I think the Volvo estate was my favourite.

Passed my test in Australia in a huge Ford Falcon station wagon, I loved it. Down to the Gold Coast every weekend loaded up with surfboards and a cool box full of tinnies. 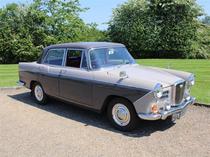 Late 1970s we had a lovely old Wolseley which was an ex-Police car. It cost us £200 and chugged around slowly but surely. We even made it from the Midlands to Cornwall and back. It had a wooden dashboard and leather seats, so much character. Now they are classic cars.

My first car was a very dodgy, old Riley Elf, makes me shudder to think I drove it., followed by:
Fiat Mirafiori sport
Peugeot 405
Vauxhall Cavalier x 2 (company cars)
Mazda 323
Skoda Fabia (company)
Alfa Romeo Giulietta (company)
Citroen Berlingo,, now DH’s
Skoda Karoq
I loved the Alfa, such a drive, we drive down to the SW of France in her, a pleasure.

I drove my 1st husbands car at first

The Granada was my favourite it was a 2.8 Saphire two tone silver and navy I loved it that was in our affluent days when I didn’t worry how much I was paying for fuel 🤣 I soon came down to earth when we divorced.

My husband always wanted an Alfa Romeo Jaxjacky but I said it didn't look smart and tidy with the number plate on one side! Was there a way to overcome this Jj?

My youngest has a Hyundai i10 as her first car. She loves it and it’s pootered up and down between Yorkshire and Scotland very well!

We’ve had a zillion cars over the years. My brother’s wife used to work in the local office of the insurance company we used and she said our file was the fattest of any private motorist they insured.

For style, I think the Lotus Elans and the gorgeous MGA’s win. I didn’t drive in those days so only knew them from the passenger seat but they were lovely.

We’ve gone over to German cars as well. My Polos served me well and now I have a BMW. In a moment of madness I bought a 5 Series and that was luxurious. It was far too big for our needs, though.

I kind of hanker for a Dacia Duster. They come out well in road tests and cost about a third of a BMW.

My first car was an old mini with no seatbelts or wing mirrors. We then lived abroad and I drove OH’s Ford Estate. Back in UK we had a Triumph Herald. At one point we each had a blue Ford Sierra. Then I had my grandfather’s Austin Allegro which he gave me on his death bed. Next was a Ford Escort followed by a Ford Ka, which I loved. I then had a silver Toyota Yaris which I thought looked like an elderly person’s car. Then, I had my first ever brand new car. A Hyundai i10, which I am still driving after six years.

Definitely my first, a Triumph Herald convertible, in black with a white flash along either side and bright red leather upholstery. Had to move into more 'sensible' arena as circumstances dictated.

When I met dh he was driving an MGB.

My first car was a Citroen Dyane but my favourite was my Peugeot 505 which ferried all our kids, all over the place for 8 years. They learnt to drive in it and borrowed it when they went out.

Fiat 126 when I passed my test wanted a 127 but this one was a good deal , loved it even gave it a name Bessie was falling to bits when I got rid of it, quite a talking point down our street.
Yellow mini old 1960’s type,
Toyota Yaris
Toyota Splash think a pattern emerging here. Always fancied Fiat 500, never been interested in big car .

Josianne I treated it as being unique and different!

My favourite car was a Mini Clubman Estate, in a sort of ‘sand’ colour. It was small and nippy, DD behind me in her Britax car seat, DS in the rear in the pram body, not fastened in with a restraint or seat belt or anything!

I’ve been very fortunate to have had fabulous cars as my husband who loves cars always had rather staid company cars.
So I got the sporty numbers!
My favourite was a Porsche, highly impractical but lovely to drive.

The car I wish I still had though was a Golf Cabriolet, it was a metallic green with a cream hood, it was a real classic.
My naughty daughter and her friend stole it for a day, they had a lovely time flashing around in it with out a driving license
between them.

I only found out recently, they were very lucky it didn’t end in disaster.

Loved my Renault 4 and later Renault 16.
I think I was happier with stick and column gear shifts.
These days I’m quite enjoying an automatic.

Same, Calendargirl! We traversed the UK with a toddler and baby in the back of an MGBGT. I think the older child had some straps but the baby was in the carrycot, which we were under the impression would save him if we had a crash. 😱

The worst one was the Cruiser - no turning circle, very limited visibility, drank petrol and had a burglar alarm that went off when it felt like it. Sod's law that this was the car I was stuck with longest.

Goodbye, G-Tech - so what next?