Win a £100 Amazon voucher, a copy of The Silent Wife by Karin Slaughter and a bundle of her best selling books worth £55 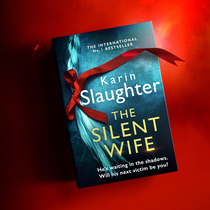 To celebrate the release of The Silent Wife by Karin Slaughter, we've teamed up with HarperCollins to offer one lucky Gransnetter the chance to win a £100 Amazon voucher and a set of 5 bestselling Karin Slaughter books, including her latest paperback, The Silent Wife, and an early proof copy of her new book, False Witness – not out until June!

4 runners up will each receive a copy of The Silent Wife by Karin Slaughter.

To enter simply tell us... What is your favourite crime/thriller book and what do you love about reading thrillers? We will be picking a winner after 11am on 13th May.

You must be a registered Gransnet user to enter. Sign up to Gransnet HERE if you haven't done so already. And don't forget to sign up to our newsletter to get the latest competitions delivered straight to your inbox…

You can find out more about The Silent Wife here:

Looking for your next page-turner? Make Karin Slaughter’s latest thriller, The Silent Wife, your new read. This No.1 Sunday Times crime thriller is full of twists and turns, with characters you’ll root for and an emotional punch that will leave you reeling. If you haven’t read Karin Slaughter before, now is the time!

He watches.
A woman runs alone in the woods. She convinces herself she has no reason to be afraid, but she’s wrong. A predator is stalking the women of Grant County. He lingers in the shadows, until the time is just right to snatch his victim.

He waits.
A decade later, the case has been closed. The killer is behind bars. But then another young woman is brutally attacked and left for dead, and the MO is identical.

He takes.
Although the original trail has gone cold – memories have faded, witnesses have disappeared – agent Will Trent and forensic pathologist Sara Linton must re-open the cold case. But the clock is ticking, and the killer is determined to find his perfect silent wife….

I love all the Jack Caffrey books by Mo Hayder, great suspense and picture painting of the characters, Flea Marley the policewomen is a favourite of mine. Unfortunately she has not published for a while but there are rumours of a new novel on the way

Just finished Michael Connelly's "The Night Fire!.
Love the way Bosch's mind works to solve the crimes & his relationship with friends & family.
I enjoy trying to solve the crime as the twists & turns of the plot unravels.

Then She Was Gone by Lisa Jewell was an amazing book.

Enjoying Blindsighted by Karin Slaughter and my book of choice is always a good thriller, either psychological or criminal

I love most crime thrillers and Police procedurals. Just discovered Patricia Gibney and am enjoying her series, but also love Steve Cavanagh, MJ Arlidge, Karin Slaughter. My kindle is full of thrillers as they are the books that I enjoy getting lost in.

I like thrillers because it's fun to try to work out exactly what is going on. I don't have a list of favourites but if I did The Girl with the Dragon Tattoo would be right up there,

I love anything by Sidney Sheldon; especially loved Bloodline. Love the twists and turns and how a couple of sub-storylines gradually merge into the main one. He keeps you guessing until the very end!

I absolutely loved The Woman in the Window by AJ Finn. I also recently finished The Last House on Needless Street by Catriona Ward which was fantastic and definitely worth a read.

I love a well written thriller. For me it's pure escapism and I love books that keep me turning pages well into the wee hours.

There are so many, I am spoilt for choice. I just love reading them.

I've just finished reading The Catch by TM Logan and was totally enthralled, I couldnt put it down. I love a book that keeps making you want to 'read another page' before bed.

I love anything by John Connelly. Like all books, reading thrillers is an escape from the humdrum everyday.

I love the challenge of looking for clues. Have just started reading some Agatha Christie.

I'm a bit old fashioned as I love Ruth Rendell stories. But I'm open to suggestion and might try some of the newer ones. Xx

The Hard Way by Lee Child, which starts off in the USA but then ends up in Norfolk UK which I think made it more interesting because your mind travels with the story, and it's like you are there, so a sort of holiday when you can't have a holiday, and also at the same time you're glad you're not there, as it's much too violent, so, I think that the thing I'm liking reading thrillers at the moment is that it's adding a bit of excitement to boring lockdown days when everything is slow and, well, boring.

My favourite is And Then There Were None by Agatha Christie. It was the first thriller book I ever read and remains my favourite. It brings great memories back of my nan too as she loved all the classic Agatha Christie books.

My favourite book is "The Moonstone" by Wilkie Collins. I first read it as a 10-year-old girl in the USSR, in Russian, in an excellent translation by a rather dubious character - Marietta Shaginyan, an Armenian Communist with a penchant for pronouncing after the Kruschtev's "thaw" that Stalin's ideas on how rout the intelligentsia & freethinkers were the best in creating the Utopia of Marx & Engels, never mind the tens of millions of victims - starved in 3 famines in Ukraine, 2 in the Volga region, one in Kazakhstan; murdered in the Lyubanka cellars, sent to Siberia; deported nations of the Crimea, the Caucasus & the Volga region, and so it continues: the list, alas, is endless & it pains my heart to go on...
When first I came to England in 1995, the first thing I did was to go to the charity shops in the West London's suburbs, the leafy Ealing & to find a dog-eared preloved copy in English, with the annotations in the margins made previously by different contributors - some were in ink, some in ballpens of various colours. I have to say that deciphering & reading them gave me as much enjoyment & pleasure as reading the novel itself. I felt in tune with the mentality of the western readers, which was no surprise to me as my forefathers & foremothers were dissidents. To my surprise, the grammatical structure, the sentiment & the author'sunique voice were as I remembered them from my childhood in a Russian translation. The woman was a political dinosaur & an apologizer for Stalin's reign of terror but oh, could she translate!..
The storyline develops with each new narrator, like a new side of a polished diamond being exposed to our eye. The Moonstone is slowly rotating on a stand, presenting us with a clue, sometimes obscuring the truth, other time adding a new layer to the mystery - its disappearance during the night after it was given as a birthday present to a young girl, a daughter of a landed gentry family. We meet the estate owners; their factotum - a house steward; a mysterious female servant falling in a love with a beau of an heiress; two doctors: one is a local GP & the other is his assistant, a mongrel of sorts, from the very heart of the colonies of the far-spread British Empire. In the mix the author also threw a renowned philanthropist and leader of several Ladies' Charity Groups in London; Indian jugglers (who are in fact are brahmins of the highest cast); a detective from London; a family lawyer; a famous traveller to India; a seedy London moneylender; a street urchin, and a reclusive and dishonorable Army Officer who fought for the English army in India and stole the Moonstone diamond while he was there in 1799: we learn about it in the preface. He leaves the diamond to his niece in his will, in what was probably a malicious attempt to infect the family that shunned him as a black sheep & a man of bad repute, with its ill luck, thus getting his revenge on the relatives who had rejected him. And let me not forget a nephew, who is in love with the young girl, the editorial force behind the collected narratives of the novel—he has asked everyone to write what they know about the disappearance of the diamond, in the interests of clearing his own name.
The finale is a masterpiece: I will not spoil it for you, my lips are sealed. I would imagine that there are still some books being delivered as we speak to the charity shops where you live. They need our help, so that they can help others - those in need of medical treatment, a bed in a hospice, cat and dog food for an animal rescue centre, a free food parcel, and a Christmas gift to a child in a detention centre for refugees like myself.

girl on the train - I recently read it and it had me on the edge of my chair!

Dean Koontz, Stephen King... I couldn't even being to choose a favourite! I love the suspense and dread a thriller can create. It's so much more powerful than watching something on a screen, your imagination can truly run wild.

Can't beat Agatha Christie - The Murder of Roger Ackroyd. I love thrillers because of the mystery, the suspense, the twist and turns. A good thriller is never dull.

I have just started to read The marriage by K L Slater.
I'm just astounded by the way a thriller can twist and turn

I have recently been introduced to the Susan Hill detective series, Easy reading and hold interest.

Really don't think I can narrow it down to one book, I've read so many for so long. Maybe a Val McDermid. . . or Mark Billingham. Or Mo Hayder, kathy Reich, Jonathan Kellerman.....
I love the psychology and science in them - as well as a good scare every now and then.

I love anything by James Patterson - there are so many of them though!!!. I'm trying to go back through the Alex Cross series from the beginning in order at the moment

I really must get my hands on this book and a large glass of red wine and set myself up in my favourite armchair overlooking the garden to be excited and intrigued by this seemingly simple title of a book: The Silent Wife. For me, if I am not reading something political, it has to be a juicy thriller! This book will be on my 'early reading' list now. Thank you kindly Karin Slaughter.

Critical of the government? They will sell you to the highest bidder