Boris Broadcast to the Country

Why did he bother? Usual amount of waffle and no clear directives. Why doesn’t he quit if he can’t deal with this competently and let somebody more more capable take over. But who?

You cannot separate the ‘man’ from the message.

SueDonim that’s a desperately sad situation for your friends. I agree with paddyanne . I’m sure when the local restrictions were introduced in Scotland recently preventing visiting other households it was said those providing care and support to a vulnerable person were excluded from the restrictions. In this sad situation for your friend and his wife they clearly need input from others and fit that category. Informal child care has now also been added to that exemption category.

You cannot separate the ‘man’ from the message.

I realize that, Furret, but in this short thread alone we've had his hair, his face, his hands!!
Other threads .... his weight, his suit, how he holds his baby etc.
The only thing no one criticises is his dog, (or I would really go for them! Grrrowl!)

Oh no. The dog is adorable. I certainly would not tolerate that being subjected to any unkind remarks either 🐾🐾

Carrie and Dilyn are the only things that Johnson has got going for him.
I do wonder about his and Carrie's relationship. 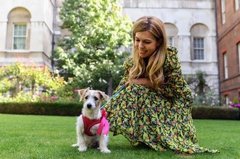 Yes, Fanny, let's have a nice image to start the day.

I think the Prime Minister delivered this important message very clearly and sincerely. “Your mild cough could be someone else’s death knell”. How much clearer could he be. His hair, hands, suit, face, baby, dog...and we’re only on page two!

It’s been said many times before but the fact still remains that the PM can’t win.

We all know the problem he has don’t we ?

He is managing the extremely difficult balancing act of trying to suppress the spread of the virus yet at the same time protect the economy and livelihoods of millions.

Do any of you criticising him honestly think that’s an easy job?

PS is that how it’s spelled?

Boris is ‘managing’ nothing. 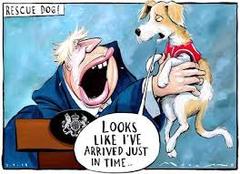 Yes, perhaps poor Dilyn is there under sufference too!

I agree with the posters who have said that criticism of the PMs hair, suit etc are inappropriate. And the dog is a distraction. However Johnson does cultivate an image of a rumpled rogue, so he is putting that out there for public consumption.

Criticism of his performance as PM is much more relevant. It is absolutely not an easy job, but he thought it was when he put himself up for it last year, didn’t he? He thought he’d be swanning around Downing Street and Chequers, making speeches about Brexit and shaking hands with his adoring fans. Instead, the whole world is faced with a major crisis, and he doesn’t have the character to lead us through it. Unfortunately, JenniferEccles, he’s not managing the balancing act at all. He’s barely managing to construct a lucid sentence unless it’s been written in advance.
He should either step up to the challenge, which I don’t believe he can, or he should get out of the way and let somebody else lead.

I posted this on the wrong thread - should have been on here.

The other significant difference in tone, which has been emerging over recent days, is whether to use the carrot or the stick.
Those who see others breaking the rules, and who blame young people for spreading virus, are likely to want to see a punitive response. The British see themselves as having a sense of fair play: if they're to give up their liberties, they really resent those who fail to play by those rules. That approach was most evident from the prime minister today and by others in recent days.
There's a subtle contrast with the message from Holyrood, which takes a softer tone. The toughest talk from Nicola Sturgeon on Tuesday was about enforcing 10pm closure and distancing rules in bars and restaurants. They have licences and face health inspectors, so the stick can be more easily applied.
But for the wider public, the Holyrood carrot is held out as a sense of common endeavour: we owe it to each other, particularly the vulnerable: let's look after one another.
That emphasises solidarity with the majority who obey the rules, rather than highlighting resentment at the minority who do not. We'll find out this winter which approach works better.
Covid in Scotland: Boris's stick and Nicola's carrot, Douglas Fraser, BBC Business/economy editor, Scotland
Rest of article - www.bbc.co.uk/news/uk-scotland-scotland-business-54257716

I agree with everything in your post Alegrias (except for dismissing Dilyn as a distraction).

I watched Miss Marple instead. Then I read a transcript of Bori’s speech and had no trouble understanding it.

I agree with everything in your post Alegrias (except for dismissing Dilyn as a distraction).

Dilyn is an asset!

How about this one then? And it's called Yummy!

See what I mean about the dog being a distraction?

Any more comments actually about our Prime Minister's suitability for the post or ability to lead the nation?

That guy was very boring LadyGracie, bring back Neil Kinnock!

Shhhhh Dylin is from the South Wales valleys too!!!

See what I mean about the dog being a distraction?

Any more comments actually about our Prime Minister's suitability for the post or ability to lead the nation?

Can't be helped, Alegrias, it's because the whole thread and its ensuing comments were a non starter.
I wouldn't dare to be so flippant on the heavy political threads!

Well thanks for your editorial view Elianne, I'm sure the OP will be happy to learn that her thread was a non-starter.

Maybe its a flippant approach to politics that has got us in this mess.

Things you think can make you look older than your years!