Double Vaccinated Being Admitted To Hospital

I saw something on one of the news channels this morning regarding a high number of over 60’s in hospital in Scotland with Covid. It said the majority had been fully vaccinated. Is this correct? If so, it’s frightening to think this Delta variant could ‘beat’ the vaccine.

I do have a friend in her mid 50’s with Covid but she said she felt fine apart from losing her sense of taste and smell. Her 21 yr old son, however, has been very poorly. She’s fully vaccinated and remarked on the difference it makes so this news about over 60’s in Scotland has caused me concern.

My stepdaughter is a doctor in intensive care. She told her father that of the seven patients in her covid ward six were unvaccinated and one was someone who had had a transplant some while ago, so his immune system was compromised 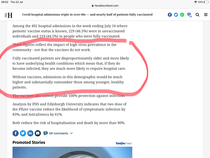 Worth noting this part of the article

Thanks for that, Lucca. I was beginning to think the vaccinations weren’t worth a cracker.

As the small print in the newspaper makes clear these are “people admitted to hospital who have a laboratory confirmed case of Covid”.

This doesn’t mean they were admitted because of Covid. All patients are tested on admission. Older people are more likely to be admitted for other reasons and then test positive. The fact that these are laboratory tested confirmations makes me think that they were done on admission.

I think we have always known that the vaccine does not necessarily prevent infection but is primarily to aid the body in fighting Covid infection.

Oh I can’t read your highlighted article Luca. It’s fuzzy. But maybe it said much the same?

The Delta variant is not beating the vaccine. The vaccine is not 100%, so in a population that was completely vaccinated you'd still get people going into hospital and the older people would be affected more than the younger.

I don't think there's any need for concern.

Try not to worry. I think we all still need to be sensible and use our common sense. The infection rate seems really high where I am and thankfully the schools have now finished or will finish this week in England. We also seem to be having some sort of ad hoc lockdown as so many people seem in isolation (I've just been released from fine

) Me and my husband, both double vaccinated, didn't catch it off the positive case in our house and I'm pretty sure my other son had a few weeks before and I'd just passed it off as a cold as the LFT was negative. I think some of it is luck but I'm sure always having the windows open in the house helped....

Here's a Guardian article by Speigelhalter and Masters about basically the same thing.

Quote from the end:

It is better to look at cool analysis by analysts, rather than hot takes on social and other media.

I do know two people, one 50’s and one 30’s who had both jabs but still caught Covid. They were both very ill and couldn’t move for nearly a week. In older people It’s not surprise if as according to the report from Scotland it has much more serious consequences.

I am continuing to isolate and wear masks thank you.

I recently had a medication review. While discussing my need for a booster later this year, the doctor informed me that the sad reality is that in general (obviously individuals vary) a fully vaccinated 60 year old is still at greater risk than an unvaccinated 30 year old. This is as Lucca said, because a long with age (often) comes other health issues. The vaccine reduces risk, but proportionately. So the risk of me being hospitalised at 70 is reduced, but it can never match that of someone who is much younger and generally healthier.

Thank you for that Lucca and Alegrias. I know that vaccination doesn’t stop infection with Covid but should stop it becoming something serious but when I saw that this morning I just thought “Oh no” just as I thought it was safe to go out……

Let’s hope we’ve got the measure of it or rather all the brilliant scientists and doctors have.

Oh I can’t read your highlighted article Luca. It’s fuzzy. But maybe it said much the same?

It on my I pad it isn’t I just checked and it’s quite legible !! Click on it then enlarge ?

I remember reading a few days ago that two thirds of so called hospital‘ admissions’ were not even kept in overnight.

Some good will come of the rise in infections if it encourages more of the unvaccinated to come forward.

Its worth noting from the article that Lucca posted that the Pfizer reduces the risk of symptomatic infection by 83% and the AZ reduces it by 61%. Both reduce the chance of death by over 90%

Far from not being worth a cracker, I think they are bl**dy miraculous.

“These figures reflect the high virus prevalence in the community - not that the vaccines don’t work.
Fully vaccinated patients are disproportionately older and more likely to have underlying health conditions which mean that if they do become infected they are much more likely to require hospital care.
Without vaccines admissions in this Demographic would be much higher and substantially outnumber those among younger healthy patients.”

Can anyone name any vaccine that is 100% effective?

Despite having all their jabs, both my children had whooping cough and one had measles. But all three illnesses were very mild. Measles lasted three days and whooping cough consisted of a week's coughing when one whooped once and the other was sick, once.

It was always made clear that the vaccines were not a hundred percent effective. It is a bit worrying that people with two jabs are now being admitted to hospital, but we need to keep a sense of proportion I think. Two jabs still means we are less likely to catch it and less likely to become seriously ill.

The last I heard from John Radcliffe in Oxford A&E was filling up with young unvaccinated people with Covid.

Thinking that because there are still people getting ill, the vaccine is useless, is like thinking that seatbelts are useless because during a typical rush-hour there are more auto injuries than there were in all of 1937 when no seatbelts were worn.

Well, yes, because there are far more cars on the roads in 2021 to crash into each other. Also, seat belts don't help much if you jaywalk in front of a car, or overtake at 100mph on a bend.

With the protection of vaccination, more people are venturing out to meet up and mingle (= more cars on the road) People are hugging more and so being exposed to more of the virus (= jaywalking into traffic) or crowding together in confined spaces (= overtaking dangerously) and so increasing their risk because they think they are safe.

No-one has ever said that vaccination is a complete bullet-proof bodysuit against the virus, only that is vastly reduces the likelihood of both infection and (should an infection get through) of how badly you are affected by it. THAT IS STILL TRUE. However, if you increase your risk, you increase your chances of catching it.

Some people will still get the virus, and some people who get it will need to be checked over in hospital and possibly kept in. Even if every single person were double vaccinated, then there would still be some who drew the short straw and were ill - perhaps due to their individual weaknesses, or their age, or how much exposure they have had.

What is not in the statistics is how long people are being kept in, and whether they are all seriously ill or just there as a precaution and to be checked over. That would be useful to know.

Why is this happening?

What qualities do you most admire in your friends

People who say 'remind me'