Anyone else seriously concerned at the rise of Trump in the USA? It seems that the more extreme, the more crazy, the more fascist he and his 'solutions' become- the more his ratings go up. You would have thought that people would begin to think he is a loose and dangerous canon- but no- they love him all the more.

My mother was studying German at Munich University in 1933- and this is exactly what she described.

And we can't just say 'this is the USA' and it has little to do with us. We have no vote of course- but we certainly live in the same crazy world.

Monthy Python- they knew how to recognize a witch- but how on earth do you recognize a 'Muslim' ???

Frightens me, if he were to be president he gets to push the button. He is a vile man. What is very worrying is the rise of the far right, France , America , who next

Yes, seriously concerned, and totally perplexed. He's just such a horrible man, how is he getting so much support?

He is a dreadful man, but unfortunately there are many there who agree with his ideas and support him. He would be a laughing stock if he was elected.

I was also horrified to hear that none of the Republican candidates accept evolution.

Thing is, all we can do is watch with horror- but we, the whole world is seriously affected by whomever is President of the USA, and also the Senate.

I was talking about this to a group of Americans I met on a cruise in October. They ridiculed Trump's bid to be President. They were interested to know that his mother came from scotland and that we knew who he was because of his business interests here. I don't think we need to worry about him being elected- at least I hope not.

I too have had the 'Trump' conversation with certain Americans on a River cruise. They saw him as mildly embarrassing and not a real worry. However, they were a well travelled bunch who held refreshingly open views on gun culture and other unpleasant 'red-neck' attitudes.
Trump does seem to appeal to quite a few Americans and I'm not sure we should discount him as just a brash clown. In the US, money and the promise of power will make many people put up with all sorts.....they were happy to vote Bush in twice!!

The man has lost his marbles! I am amazed that he has any support at all. I sincerely hope he is not successful in achieving the Presidency.

I agree that there are people who support him, but not many. Most of them live in the inland agricultural states of the US where poverty is endemic. Few people will have ever been outside their own state, let alone have travelled overseas, they will have had limited if any contacts with anyone from another country, let alone have met anyone who actually was muslim. An area where fundamentalist christianity and conspircacy theorist and the extreme right wing libertarians hold out.

These are the states that have some of the earliest primaries and among whom Trump is campaigning and this kind of unpleasant racism goes down well there. Most of the voters, however live along the east and west coast and are far more sophisticated.

I know this post contains some sweeping generalisations. There are well travelled, well-educated people living in the mid-states, but not many.

DH had cause to travel in these states in the 1980s and 1990s, and was quite shaken by the amount of ignorance about their own country, let alone the world beyond many people showed. One person, was amazed to discover that coming from Great Britain, DH spoke English. I suppose the strange accent (to him) DH spoke in suggested it wasn't his mother tongue.

It is disturbing how many Americans will simply deny many of the things they can't comprehend; whether it is evolution, immunisation or the current political climate. They hark back to simpler times they people didn't concern themselves with such things.

Obviously, many politicians are a devious lot and will take advantage of this apathy and will shift the ills of the nation to different nations, races or religions. The xenophobia created by these politicians (and some of our own politicians aren't above it either) is frightening and causes concern.

I've had to sit many aptitude tests to seek employment, I didn't mind taking them as they proved to potential employers if I was suitable for a particular role. I'm beginning to think these tests should be given to anyone who seeks public office and a role in deciding the policies a nation adopts.

What someone is thinking (deep down) is often very different to what someone would dare say in public, or write down in some kind of aptitude test in order to successfully gain employment knowsley.

Some would say that maybe it should be the people entering the UK (or USA) who should be sitting the aptitude test but again, what someone would write or say in order to get what they want is often very different to what they think deep down.

I hate to say "I told you so" but I raised my worries about him back in September. The thread had very little support, and "died" after a handful of responses
Wed 16-Sep-15 22:27:34
Is it safe to dismiss him as a nutcase? To consign him to the Monster Raving Republican Party or is he a genuine threat?
He promises to build a great wall of the USA along the border with Mexico to stop illegal immigrants
The rednecks were loving it, but it made my blood run cold.

There is a saying that "desperate times call for desperate measures" and I am sure that Trump is playing right up tom this.

GillyBob, the people who set aptitude tests realise that many will try to answer what is acceptable, rather than what they feel. To counter this the tests are conducted in a timed environment so the person sitting the test doesn't have the time to ponder what would be the most universally acceptable answer to the questions.

Far too few politicians are appointed to roles which require some understanding of say science or finance. For a politician to put himself forward for the position of President and to unite the people of the country, while he displays antipathy to people of disabilities, of different races, religions or colour is just beyond belief.

His rhetoric may go down well in South Carolina, but can't see most Americans applauding it.Does the man know how many Muslims already live in the US? I know it's a very large figure,but suspect he doesn't know.Not much use keeping people out if you already have millions.
What I want to know, is why, with all his great wealth, he can't get a better toupe ( toupee?) it's a mystery.

Must admit I thought the OP was referring to that in the thread title...

Yes, indeed, that strange barnett. It shows his complete lack of self awareness if he thinks it is a good look.
He has just been stripped of an honorary degree from Robert Gordon University. I have faith in the American people. They won't elect this eejit.

I'm not very good at links and neither is my computer. Hope this works.

They speak with forked tongue!

And so say all of us!

He'll never become president an d will go the way of all other failures.

We all agree on this.

Although the man is a fool and a bigot, it is not him that worries me, it is the people applauding him. If he seriously wants to protect US citizens from violence he would do better to lock up every disaffected or nerdy teenager for they seem to be the ones doing all the shooting lately. This recent, (of many), gun massacre has got everyone panicking because it was done by 2 Muslims; would there have been the same panic if it had been 2 home grown murderers with a grudge and a gun? I think not. He doesnt realise how much he is laughed at in Scotland, the land he professes to love, in Scotland a Trump is a wet fart, how appropriate. 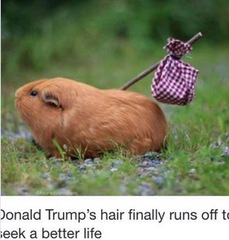 There is little respect in this neck of the woods for the Donald. He rode roughshod over local people to gain planning permission for his golf course with promises of a new hotel, houses and jobs. None have materialised. The course is known to locals as Trumpton! I was glad to hear that Nicola Sturgeon has removed Trump as a 'business ambassador ' for Scotland and news is just breaking that one of our local universities has stripped him of his honorary degree. As I said, no love lost here, in fact this is the kind of thing that appears in social media.