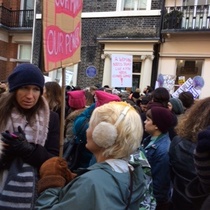 Today, I participated in the Women's March to The American Embassy in London in protest against Trump's attitude to women and to his proposed plans.
There were thousands of woman( and some men, babies in slings and pushchairs, marching children, even dogs on leads), all using the only method left to us to express our solidarity. It was cold, the sun shone, drums beat and people chatted, shared case histories, laughed, sand, cheered to each helicopter flying overhead and marched until they could move no more.
The police were wonderful and it was peaceful all round, full of goodwill.
There were hundreds of pink pussycat hats, original handmade placards and slogans, even a huge vagina in cardboard. My favourite was a placard( in background of one of the photos attached) stating thus:
A woman needs Trump
Like a fish needs climate change.

My DH, who was with me, thinks that the march, especially one in a foreign country, is a feel good moment for the participants but otherwise useless. Trump is now president and such marches, DH thinks, will do nothing to change the course of his government.

I agree with your DH, Rinouchka.

I am sad that I couldn't go on a march today. I applaud all those that marched today. The fact so many women across the world marched does send out a message. How the President of the USA could have said those derogatory comments about women and then become President is beyond me. What have we become when someone in such a position of power has so little respect for others.

It won't change things overnight but it registers protest and disapproval of the Trumpster. It's important that we don't all take the line of least resistance in the face of Mr T's approach to government.

Nothing will change overnight, but it sends a message not just to Trump but to all mysoginists who may feel more empowered by Trumps dirty mouth and actions " Don't mess with us"

It will do what? Who was demonstrating anyway? the elite? Trump may say a few booboos along the way but he certainly speaks in a fantastic way. These stupid womens rights know nothing about actual womens rights.

You are being sorely played! Im a woman therefore Im neither upset by this nor am I feeling in anyway stripped of that. Stop being such idiots in my name.

I think the marches made a point.

I think a lot bigger point would have been made if Donald Trump ended up losing the race because of his comments.

I think he will be a little more careful in future with his comments towards women.

A point of what? Im sure he will, he has healthy daughters to help him. The fact that women were used to make such a mute point is beyond comprehension. It would be interesting to know where this actually came from. Women? women that are secure as such? I think not.

stillaliveandkicking women weren't used to make a point, they in their thousands chose to make that point. As for being elite I think you will find they were protesting about the elite.

If only he had made a mute (sic) point we wouldn't have had to listen to his appalling campaign 'speeches'.

Women weren't used to make a point, they in their thousands chose to make that point. As for being elite I think you will find they were protesting about the elite.

I think Donald believes that HE is the elite - after all he has made lots of money, that is what he considers a success.

I think you may find that they were. Im sure he has learned his lesson and this is not the way to go. I hate all this radical stuff when really all you need to do is say no in every day life.

Trump will never change -absolute guarantee on that one.

Women to Trump, of course, are just objects with pussies to grab when he feels like demonstrating what a "regular guy" he is.

You are not very polite are you

That is attacking me, not my opinion.

(and it is Trump who has the dick, not me)

Im a realist and speak as I find. So you think that lovely blonde by his side isn't in it for the power or money? She's totally dictated to and lives a lowly life? Get real. Women do the same. Men are just a bit silly about it.

Well done you, fantastic, wish I d have been with you Keep on it gal a disgusting dangerous little man who thinks he's invincible, he needs showing he's not
Stillalive are you a man ?

My Daughters and Granddaughters were amongst the protesters , I wish I could have been there ! If the women of the USA had voted with their brains we wouldn't be in this pickle . They must all have been browbeaten by the males to vote for him

BlueBell, I was thinking exactly the same. Must be a man.

No, totally female with huge breasts to show for it. I however don't have two faces. Like i said, I'm a realist, Im also a woman so class myself as a feminist, which means equal rights for all within the same fact that biology plays a part in who we are. Im very comfortable with myself, are you?