Check out the similarities:

Did DT really use the word 'egregious'? Was it tweeted or spoken?

Yes he did use that word. We watched it on the news. It made my DH look up from his paper!

Don't know if Corbyn prays, he said he did but that doesn't mean it was true . He was at an IRA tribute meeting for Bobbie Sands, when asked why a tribute to an IRA member said - I prayed for both sides , !

When was the tribute meeting annie? Bobbie Sands died over 36 years ago so who knows what's changed? However, I think more recently he has said that faith is a private matter so we wouldn't know whether he was praying or not about Venezuela I suppose. 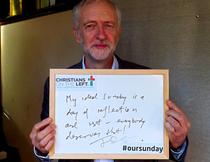 I wasn't saying his faith had changed but that if he did say he prayed re the BS tribute, he might not say he prayed re V today because he's said he thinks faith is a private matter. I suppose a religious person would pray both both sides though wouldn't they in some situations?

Gosh Baggs - I've just realised there's a whole 'Corbyn and Trump are similar' world out there.
"Corbyn, 68, and Trump, 70, are both anti-establishment insurgents who have been married three times. They both like dictators and dislike Nato. They both have embarrassing pasts which should disqualify them from high office. When they were elected to lead their parties, Trump and Corbyn were both dismissed as jokes. Their emergence was seen as a sign that their parties had gone mad — but it turned out the electorate was just as mad, and the laughing stopped. Both men then got lucky: they stood against seemingly invincible women who took victory for granted and turned voters against them with their arrogance."

Is that Corbyn's handwriting?

Haha! Primrose.... the two are closer than we thought.

The situation and events in Virginia and Venezuela have very little in common. A mob of white supremacists making nazi salutes and shouting nazi slogans is different from the unrest in Venezuela which has resulted from animosity between two groups of people who have different economic backgrounds and interests, and different political affiliations.

Oscar Guardiola-Rivera who teaches international law and international affairs at Birkbeck College, University of London, recently wrote this in the Guardian regarding the situation in Venezuela:

"The right wing opposition can’t rally a majority beyond the middle-upper classes even while many Venezuelans, especially the poorer, suffer from very real shortages and economic hardship. Why? There’s only one sensible answer: the majority of them fear the return of the right wing to power more than the alleged incompetence of Maduro. They know that if the current opposition leadership comes to power, backed by the likes of Trump and the notorious former Colombian president Álvaro Uribe Vélez, the result would be austerity and most likely a civil war as devastating as that of neighbouring Colombia."

Of course, not everyone will agree with this analysis but it is a perfectly respectable point of view and one that other reputable commentators also put forward.

I doubt that many respected commentators would put forward the view that what happened in Charlottesville was not primarily caused by fascists who wanted to intimidate and incite violence against non-white people. Even the republicans have admonished Trump for making a statement that appears to let the fascists off the hook by, in effect, blaming both sides for the violence that occurred - even when a person has been deliberately murdered and many others hurt.

These continued attempts by the right wing press and others to discredit Corbyn is, in my view, just another example of the tactics of the Conservative anti-Corbyn smear machine to demonise Corbyn in order to detract from its own record:

"Overall, £2.5m of military goods have been sold to the country [Venezuela] since 2008, including components for military radar, weapon sights and military aircraft engines. In the last year of figures, to March 2016, licences for goods worth more than £80,000 were approved, including equipment for crowd control to be used by law enforcement agencies.........

" ........No 10 has repeatedly criticised Nicolás Maduro’s government for imprisoning opposition leaders. It described the death of at least 120 protesters as a tragedy, and called on the country to respect human rights and uphold the rule of law.........

".........Jo Swinson, the Liberal Democrats deputy leader, said it “smacks of double standards for the Tories to attack the Labour leadership for supporting Venezuela whilst selling arms and security equipment to dictators and regimes with even worse human rights records." [Guardian 11 August]

.....and here we have another poster denying that what Maduro is doing is wrong, 120 protesters killed, so what does it matter, if they are being killed by Socialists!Those protesters probably deserved it right? Oh Eloethan will you carry on defending Maduro and Corbyn even when your better judgement must tell you otherwise.
Wrong doing is wrong doing no matter which side politically you are on.