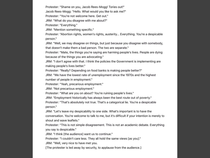 I think the guy's coolness in the face of bad manners is part of the reason why.

Yes, I have just watched the clip on the BBC News website. (Made me laugh, when the protester asked what was wrong replies "everything". He argues like wot I do). I like JRM, think they should have him in charge of the Brexit talks. He would soon wear down Junker et al.

Wear down Junker, or possibly charm him?
I think that some protesters do simply want to shout and wave leaflets.
Have heard that JRM wants to be Speaker Of The House, I think it would suit him.

Just watched his speech ! Well who thinks he’s got the young vote in the bag? “Be of good cheer all you young”- imagine saying this to an 18 year old ??

What a silly narcissist he is.

I think this is meant to be a satirical thread, ww

('cos no-one could take him seriously, surely...)

? I think you are correct Maize

Do I detect upside down snobbery here?!!!

Niggly, seems he should say to 18 year olds - they are f*****g losers, much more acceptable, for some

Polite, intelligent and well mannered. Not everyone's cup of tea obviously but I like him.

You're right annie, being obnoxious in every respect is apparently fine, being willing to engage in courteous conversation is ridiculous, old fashioned and turns you into a figure of fun. Very sad reflection of the times we live in.

Not agreeing with abortion under any circumstances at the same time as making money from abortion pills doesn't matter at all does it? As long as you have good manners.

Of course it matters, and of course you can voice your disapproval forcefully, but surely you don't have to resort to f-ing and blinding and threatening behaviour to get you point across?!

I think not; that's a hangover from when 'class' mattered and the 'upper classes' were held to be superior to the lower classes.

Courteous and charming he might be but he comes over as more 'entitled' than intelligent and his politics are deeply unpleasant.

Heaven help us if voters think charm and manners are more important attributes in a politician than good solid political nous and an interest in benefiting all our citizens.

Everyone is entitled to their views including JRM and not all of us are that keen on abortion!

I think it’s a sad reflection on society when aggressive, rude protesters against Conservatives act the way they do outside the conference centre.Were there aggressive, rude people shouting outside the Labour conference centre, I doubt it.
We have a system in place to get rid of a government we don’t like, it’s called a general election, and we have just had one.Labour didn’t win it.

whatever you think of him ,as a politician he must be open to criticism ...even outside the conference ..after all he's paid BY US ,that gives US rights .Not that you would ever know it where tories are concerned .Mr Reese Mogg is just another hypocritical tory ...do what I say not what I do .Hats off to the young man who faced up to him

niggly I dont know ANYONE who would say they want abortion but MOST accept that its a necessity .What would you do if your daughter 's life was at risk and the doctor said you have to let her die because abortion is against the law ?Accept it as the "will of god" I know I wouldn't !

nothing to do with class, no politician should stand on a stage in the O2 and use the f word. And most definitely there is an aggression and vulgarity new to the Labour Party in the last few years, embarrassing for some of us, acceptable for others.

I'm not comfortable with abortion per sa and definitely UNcomfortable with one over three months, and would only agree to it under very exceptional circumstances.
All politicians are open to criticism, but shouldn't have to put up with being sworn at, spat on or subjected to threatening behaviour of any kind.

It may come as a complete surprise to you, lemongrove but in the UK people are allowed to protest peacefully about anything they like, at any time they like. They don't have to wait for a general election. 'Peaceful' in this context doesn't mean 'quietly' either. It just means non-violently.

FWIW I think that the EU negotiators would eat JRM

A silly post from you Maizie because it was obvious I meant that to change anything politically you need an election, shouting and waving banners and leaflets, spitting, jostling and so on accomplish nothing and show what some
People are like, just as all the online abuse directed at MP’s, but more ‘in your face’.Yelling that MP’s are despicable ( reminds me of Minions) ? is barmy.

He is entitled to his opinion on abortion but he is hypocritical to make money from abortion pills.

At least he hasn't advocated lynching any of the opposition- unlike that pillar of society J McDonnell.

As well as starving the NHS, Education has been starved by this government too.