A thread for all Corbyn lovers & haters

A thread for all Corbyn lovers & haters

The assumption that people fall into these categories implies the OP expects ad hominem attacks or commendations and will almost certainly lead to the ad hominem attacks on other members. The last thread set up under this title was closed by GNHQ. Isn't starting another under the same title just a poke in the eye with a sharp stick?

Perhaps it would be possible, just once, for the right on GN to set up a thread that asks for a discussion of policy, programmes, legislation, etc., e.g. politics and real news.

Don't you think, though, that because he seems to be such a divisive figure (as in the term 'magnetism' as defined in the OP) that this detracts from the messages of policy and programmes that the LP are trying to broadcast to a wider public?

Likewise with people like Seamas Milne, Jon Lansmann?
Many people who may have voted Labour in the past (not Labour party members) are being put off listening to the message by the messengers?

If you want a thread on a different topic GGMk2, set one up!

I'd agree with you on Seamus and Jon, Jalima. They are possibly more divisive. There are some articles in the Guardian today about Momentum. Well, from yesterday evening.

Ad hominin. "He" is no more "divisive" than the Blairites/soft Labour/whatever they now see themselves as, are divisive by just being themselves. They are divided in their view of politics.

Not another f8cking Corbyn thread

This is getting really, really stupid.

The problem I have with discussing policies is quite simply I do not trust what Corbyn,Lansman,McDonald and McClusky put forward.

I am not comfortable either with the latest idea , all black short lists .

I do not trust Corbyn so do not believe what he promises to gain power. I do not like the way older members are now dismissed and the young seen as the saviours of the vunerable.

A most interesting link Primrose, thank you.

I am beginning to wonder about the level of intelligence of those who find repeating the same thing over and over again such fun?

If anyone wanted to give consideration to the democratic process in the uk there is nothing in these threads that would enlighten them except that there are individuals who appear to have such a vociferous hatred for one individual it borders on a very dodgy obsession, and almost equivalent to on-line stalking.

I'm just not going to rise to it Annie. This is how the threads end up deleted.

People can call me stupid, ignorant, say I'm a stalker and moan about another fucking Corbyn thread.

I don't care at all!

It appears you do Primrose, although no one called you anything personally; it was a general comment. I am not sure that anyone who didn't care would be using language like: 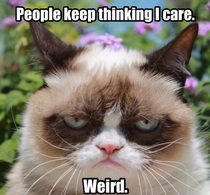 This is getting really, really stupid.

Maizie was/is angry that there is another of these threads. I think they are hateful, i.e., full of hate (should anyone want to know).

You use the same language as Maizie to show you are not angry. Very strange Primrose.

But everyone should be able to join in a thread that is of interest to them Annie without the ad hominin remarks than being aimed at them. That is not my experience of these threads.

No one said anything to Maizie , it cannot be of interesting to anyone who immediately dismisses it as another f8cking Corbyn tbread

I don't find cookery threads interesting so don't read them, it would be so ill mannered to post - another f8cking cooking thread , not that i would use such language, I have here because I am quoting Maizie

Primrose... quite right, rise above it, the aim of all the whataboutery from some quarters is solely to get an angry response and get the thread deleted.
I shall just

at it all.
There is every right to have a Corbyn thread, if anyone dislikes it, then tough! Go onto the ‘Maybot’ thread instead perhaps.

Nobody needed to say anything to Maizie, Annie. This is the 7th or 8th of it's ilk and you only have to read the OP to see the intended direction is just the same as those.

These threads are set up to tear people apart on a personal basis, be they politicians or GNetters. They have not been, however hard others have tried, about politics.

Annie am just watching the Daily Politics, discussing that McDonnell is agreeing with the government in every way about the Russian poisonings, only Corbyn who veers away from saying that now.The Labour MP’s must get so confused with all his fence sitting and obfuscation on every other matter, they never get a clear line on his position.

In fact, that must be one of the most annoying thing in Parliament for them, never being completely sure of what
JC is behind ( or not behind) at any one time.

This discussion thread has reached a 1000 message limit, and so cannot accept new messages.
Start a new discussion